Wow wow wow what a month! Our past 6-9 months were all pretty consistent. We were chugging along, trying this and that, with no growth but no setbacks. Then our 29th month happened, and what a drastic change!

Our 29th month blogging was the best consistently good month we’ve ever had. In fact, it’s the best month we’ve had since our 5th month, when our epic post “The Worst Financial Mistake of My Life” was featured on Rockstar Finance.  Is it a fluke, or are we finally arriving?

Our readership increased dramatically during our 29th month.  We had over 2500 users, and over 3000 sessions! That’s an increase in over 1000 users from previous months! 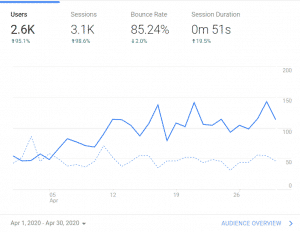 As you can see, the month started out like any other. The traffic during the first week of April was fairly consistent with the traffic we’ve seen in previous months.

But then, something magical happened. Our traffic stated to increase. We went to averaging 40-50 users a day, to 80, and then to over 100 users each day! It was glorious to behold! And the beautiful thing about this that I actually have some idea as to how it happened.

We killed it on organic search during our 29th month. Nearly 1500 visitors found us organically this month -well over the 1000 user goal we had! The best part about this is the consistency. It wasn’t a one-day fluke – we had over 60 users coming to us via organic search nearly every day this month  (after the first week).

Our top page from organic search is still “How to be Twitch Affiliate in 30 Days”.  Are more people searching for that because of social distancing or are we starting to become an authority on that topic? I’m hoping for the later- because I actually did two things this month to make that happen. First, I updated the post. I hadn’t touched it since I wrote it over a year ago, and since it was getting a few hits, I thought it was time. I updated it the first week of April.

Then, I decided I needed some more related content. So, I wrote a post on how to start a Twitch stream, with the specific intent of linking those pages together. My hope was to help the Google Gods see that I’m still writing relevant and related content. I published that post on April 16.

I seriously think that those two things appeased the Google gods and improved my ranking. If you have a post that’s getting picked up a little bit by Google – try updating it and writing something related. Make sure you add back links in both posts. I don’t know for sure that this is why I saw an increase, but it does make sense given the timeline.

Our second biggest traffic driver during our 29th month was social media. It’s held fast in the number two spot for quite a few months. And we saw a huge improvement this month!

We had 644 users from social media – double what we had last month! We published some awesome content this month – mostly stuff that’s related to this Pandemic and the politics of it. Shareable stuff, if I do say so myself!

Pinterest is where most of our social media growth came from. We went from 270 users to 468! That’s a pretty spectacular increase.

The only thing I did on Pinterest this month that was different from previous months was manual pinning – and believe me I didn’t do a lot of it! I spent about 30 minutes on two different days this month (so an hour total) manually pinning things.

And since I don’t really know what is actually meant by “manually pinning” let me explain what I did. I went to my Partners in Fire board (which is where I archive all my blog posts -you should follow me there if you aren’t already!) and manually pinned some of my pins from there onto other boards (mostly my own, but a few group boards.). Then I went to a few group boards, and saved some of the pins I liked to my personal boards.

To be fair, I’m not sure if this is what contributed to the increase in users or not. People weren’t clicking on the pins I shared – most of the traffic went to the old standby “adult conversations you need to have before you move in together” – which is not one that I repined. But, it’s possible that being slightly more active on the platform showed my top performing pins to more people.  I’ll never understand algorithms.

Our page views from Twitter increased drastically from last month. We had 114 users visiting us from the platform, an increase of nearly 70 users!

One of the reasons we saw such an increase is because I bought the guide Make it Stick from GumRoad. This mini-book is all about how to write engaging and evocative tweets that people can’t help but to engage with. I still suck at that, because nuance is my favorite thing, and it’s hard to be evocative and have nuance at the same time. But the guide really helped me understand the psychological side of Twitter, and I used some of the tips to write more evocative tweets to go along with the posts that I’ve been sharing – and guess what? I’ve been getting more clicks!

We drastically increased the number of users visiting us from Facebook this month. We went from 4 to fifty! And truth be told, it wasn’t that much work. We commented a tiny bit on other pages (which worked in our favor – because those pages sometimes shared our posts!), shared our Instagram posts to Facebook, and shared a few older posts.

All in all, I probably spent 20 minutes on Facebook the entire month – that’s definitely worth the 50 users. Maybe I’ll try spending 40 minutes on it in May and see if we can get over 100 users from the platform! Make sure you like my page to follow along!

We saw a slight increase in the number of users from direct hits this month – and that means we were back in line with previous months! Although the content from March wasn’t a big hit – I’m glad I published it. First, it’s vital to celebrate amazing women, regardless of how interested others might be. But second, it’s important to experiment with content ideas. Sometimes things stick, and sometimes they don’t, but how are you going to know unless you try?

But clearly, the people wanted more relevant content – and that’s what we gave them this month!

Speaking of content – we published some freaking amazing and apt content in April. Unfortunately, I had to scrap most of my calendar and restart. I can’t imagine talking about being a landlord during a time when millions of people are struggling to pay rent. That seemed sort of tone deaf to me.

So instead, I swapped that content out with stuff much more relevant to the current situation. I wrote why it’s ridiculous to panic about the stock market, how the stimulus isn’t enough, and dealing with conflicting feelings during this difficult time. In addition, I wrote a few pieces on institutional policies that keep people trapped, and limit the opportunities to reach financial independence with the Middle -Class Trap and a scathing review of how banks treat the poor. I thought it was important to remind readers why a self-professed finance (ahem – and lifestyle!) blogger would write about such a wide array of things, with my highly opinionated piece on money’s influence in everything we do.

Although we did a fantastic job of improving our readership during our 29th month, we still have a long way to go.  My goal for the year is to get to the 25000 monthly page views needed to gain access to high-end ad networks like Mediavine. That’s ten times what we have right now – a feat which seems impossible!

But it’s not. If I can nearly double my traffic from my 28th month to my 29th month – I can do it again. And I have a few ideas on how to accomplish that.

First, I’m going to work a little more on Facebook, like I mentioned above. Doubling my views from that platform again will go a long way towards getting the exponential growth that I need. I’m going to continue using the lessons learned from Make it Stick to write more engaging copy for Twitter when I reshare my old blog posts – which hopefully will continue to result in page views. And, I’m going to spend a little bit of time this month doing some manual pinning on Pinterest, as described above.

But mostly, I’m going to continue to work on my SEO. That seems to have had the biggest pay off so far. I’ll probably write another article or two related to Twitch streaming in order to make sure Google knows I’m still an “expert” on the topic, and I’m going to try to increase SEO traffic to other posts as well with updates, in depth keyword research, and creating backlinks. I finally signed up for HARO – which everyone has been talking about since FINCON. Supposedly it’s a great resource for getting backlinks – so we shall see!

If you’ve been following along with me on this journey for all 29 months, maybe you have some insight. What ideas do you have for increasing readership? I’d love to hear about it in the comments!