I did a great job of sticking to my posting schedule during my 15th month – even during a long weekend trip to Savannah! We even published a bonus post on Being Productive and recorded a surprise episode of “My Boyfriend Sucks With Money”. That’s a lot of posting for one month!

I’m incredibly happy with our readership stats for the month. Although we only had half the number of visitors this month as we did last month, we are seeing more consistent daily traffic, which I think is more important. We had over 1.7K users for the month, and brought in between 30 and 50 users every day. We only had two days this period with less than 30 users, which I think is phenomenal. Some of our users came from a Rockstar Finance feature, but even without that we would have made our goal of over 1000 users per month, which is pretty awesome.

Direct hits were our largest source of traffic this month, with over 800 users. A big part of this was the Rockstar Finance feature, which brought us about 600 visitors. For some reason, those hits are recorded as direct rather than as referrals. I’m not sure why. The rest of our direct hits were from our awesome subscribers! If you haven’t subscribed to have Partners in Fire posts sent directly to your inbox, do it now!

Social Media was the second top driver of traffic to Partners in Fire during our fifteenth month blogging. Pinterest was the clear winner yet again, but Twitter and Facebook are still bringing in consistent traffic.  In total, we had 548 visitors from social media this month.

Pinterest was the number one social media network for traffic during our fifteenth month, and this was without any viral pins! I’m getting pretty consistent traffic from my pins on Saving Money, Making $16 in One Year Blogging, and interestingly enough, How to Become a Twitch Affiliate. Its fun to see pins that I made a few months ago still driving traffic. Overall, we had 396 users from Pinterest during this period. Tailwind is finally paying off!

Facebook traffic during my fifteenth month blogging was pretty consistent with the previous month. We had 75 users from Facebook this month compared to 76 last month. I’ve been continuing to post engaging content on the Facebook page, and I’m working hard to try to build my reach on the platform. I’ve been getting one or two new likes every week, so hopefully I will be able to maintain that and get over 200 likes by the end of the year and continue to grow from there.

My Twitter game wasn’t as strong this month as it was last month, but we still got 67 users to the site from that platform. It’s also my favorite place for engaging with other bloggers and seeing what’s happening in the personal finance community, and my favorite place to find content to read and share.

I’m still struggling with Instagram. I did a bit better with posting pictures this month, but I still only got nine users from the platform, which I guess is better than the 1 user from last month.  To get some Instagram help, I re-read theDebt to Riches guide to Instagram (an amazing post, by the way!) and decided to add link tree to my Instagram profile to help drive users to my latest blog posts. I had just been linking to my home page, but maybe this will help drive more targeted traffic.

My goal is still to get to 10K followers so that I can add links to my story – but it’s so hard to get followers on Instagram! In the month since my last update, I’ve only increased my followership by 100, and it’s been tough! Every time I see a little growth, I lose a little. I guess that’s just the Instagram game. 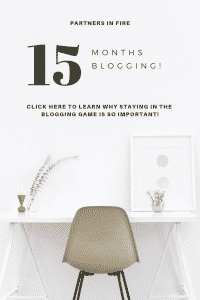 Don’t forget to Pin It!

Organic search was our third biggest driver of traffic for our fourteenth month. We had 325 users visit our website through organic search, which is almost 100 more than last month. This is the field that I’m most excited to see growth in – we had some days with over 20 visitors heading to our site via organic search!

According to Alexa, people are still coming to our site by searching for “barista fire”, “Coast Fire”, and “regal assets”. My domain authority also increased from 25 to 27 over the course of the month, so google is starting to regard Partners in Fire as more of an authority! That just goes to show how important longevity is to blogging. So if you’re new to blogging – keep it up! Organic growth will come eventually.

Our final traffic driver was referral traffic. We only had 56 users referred from other sites this period, most of which seemed pretty scammy. I don’t understand why a random scam site would want to link to my blog, but I also don’t know how to prevent it. Some were e-mail referrals though, which tells me that people are sharing our posts with their friends via email. That’s pretty cool!

I published a pretty interesting mix of content this month. I discussed Universal Basic Income, The Ultimate Productivity Bundle, How to Deal with Stress, and gave a recap of my No-Spend January. My favorite post of this month was “What Should Grown-Ups Spend their Money on”, because it I wrote it for my boyfriend’s daughter, who I’m trying to get interested in finance. The post that I published this month that garnered the most attention was “10 Money Saving Tips”. Apparently lots of people are interested in how they can save money! Who would’ve thought!

The post that garnered the most views overall was the one that was featured on Rockstar Finance – my No Spend Year Challenge. This was the pin that went viral last month as well, I’m still shocked at how well received that post was.

I’m still working on monetizing the blog and I’m still failing at it. But I’m having fun trying! I’m still very involved in the Ultimate Bundles Program (and loving my healthy meal planning bundle already!) but I have yet to make a sale there. I’m also still with affiliated with Bluehost as I feel that they are one of the best hosting sites for new bloggers, but I haven’t had any sales with them either.

I did make sixteen cents onAmazon

this month though, so that’s a huge win!

We achieved our goal of getting over 1000 page views for two months in a row! The next goal is to make it three! Then we will work on getting 2000, 5000, and even 10000! That sounds so far away, but I don’t think it’s insurmountable. I’m confident that we can get there by the end of the year!

What are your thoughts on our fifteenth month blogging? How do you think we did? Give us some ideas for increasing our readership for month fifteen and beyond!