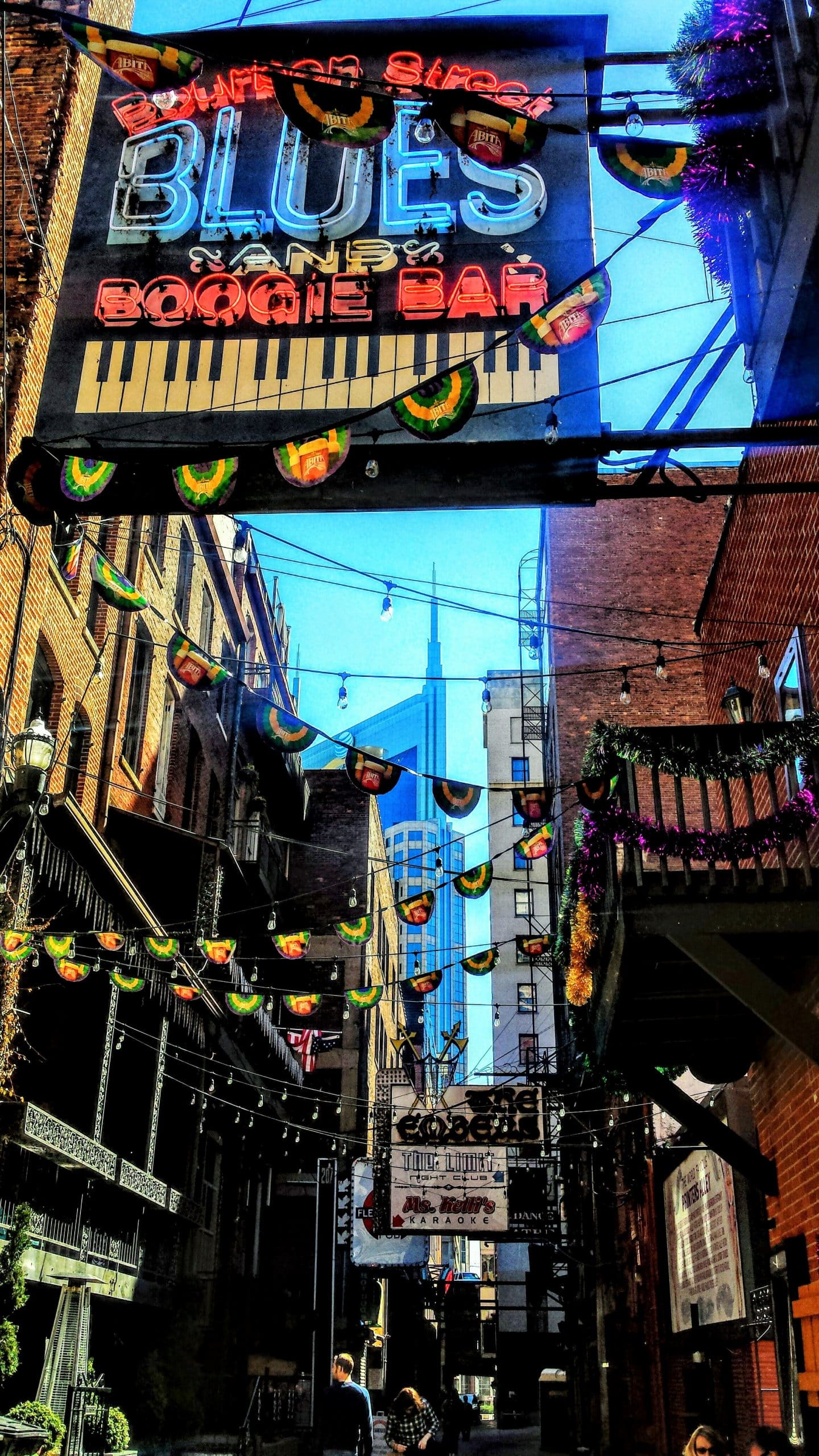 After all the amazing things I’ve heard about Music City’s nightlife, I had no choice but to spend my first night bar hopping Nashville! Broadway Street in downtown Nashville is filled with clubs, bars, and, oddly enough, boot stores. It’s a perfect place for a bar hop! Most of the bars have live bands that play country rock all night long. Another great thing about Nashville (for me) is that Angry Orchard is a huge thing out there. Most bars have it in the bottle, and some even have it on tap! I wasn’t expecting to find my beloved cider in Nashville, but I was thrilled!

We began Bar hopping Nashville at one of the first bars on the strip, Big Bang Bar. This place was huge, and also had a burger joint attached so you could start (or finish) your night of drinking with some greasy carbs if you so desire. Even with its large size, this bar was pretty packed. They had an awesome live band playing, but the crowds made it difficult to find a seat. The front of the bar has a beat up car with no roof on display which you can use for pictures. It was a fun atmosphere, but since we didn’t like the crowds too much, we decided to move on.

Our next stop on our Nashville Bar hop was the Bootleggers  Inn, about a block and a half down Broadway from the Big Bang. This place was a lot smaller, with a very divey feel to it. They also has a band playing, and the female singer was fantastic. She had an amazing voice that we were all completely sucked into. Her name is Justine Blazer, and I highly recommend you check out her website and facebook page. What an amazing talent!

This bar also had the most amazing drinks of the night – bootleg whisky margaritas in a variety of flavors. I ordered a strawberry banana (yes, they will mix flavors for you!) and it was one of the most delicious drinks I’ve ever tasted. It tasted like candy, so dangerous! The only drawback is that these margaritas were a bit pricey, at $7.5 each. When Justine’s band finished playing, we decided to find another place.

We continued to Bar hop Nashville and made our way to BB Kings Blues Club.  This club place was so much fun that we ended up closing the place out! BB King’s Blues club is about a half a block north of Broadway on 2nd Avenue. This was the first bar that we encountered which had a cover, but it was only $5, and well worth it. The ambiance was fantastic, it was a comfortable lounge which was an elegant step up from the whisky dive bar that we had just enjoyed.

BB King’s has a professional stage built ready for the band, and also has a pretty decent sized dance floor. The band played a lot of blues which easily got the audience into a groove, and also played a nice mix of funk to keep the energy up. We had planned to just check out the bar for a few minutes then continue on to the Ugly Coyote next door, but we had so much fun dancing and grooving at BB Kings that we stayed there until last call.

Unfortunately, since we had too much fun at BB Kings, we also missed out on bar hopping Nashville’s famed Printer’s Alley, which is a small pedestrian street filled with gritty country dive bars. I kind of made up for it by checking it out the next day (during the day) to see what all the fuss was about, and it actually looked very interesting! I think the next time I head out for a Bar hop in Nashville, Printer’s Alley will be at the top of my list!