Being Thankful for What We Have

I’m incredibly thankful for all the things I have in life. We live in a society where it’s easy to start a blog and try to forge your way into financial freedom (note I said try – not achieve). I clearly think there are tons of ways we can improve as a society – valuing families, UBI, and improving wages to name a few, but that’s not to say I’m not thankful for what we already have.

Although things aren’t perfect, there are a lot of reasons that I’m thankful to live in the United States. Everyone has the opportunity to vote and chose our representatives (though suppression is a real thing, groups are working to make it better). We can switch states if we don’t agree with the policies of the state that we live in, or vote to effect change in our home states.

We live in a time where there are tons of opportunities to make money outside of a traditional job. You can watch people’s pets, drive, blog, sell stuff – the ideas for side hustles are endless. Many people have been able to escape the nine to five grind and make their own schedules by engaging in these side hustles. We have the opportunity to live the way we want, and for that I’m eternally grateful.

I understand that not everyone in the United States had opportunities that I have. There is still a ton of work that needs to be done to ensure racial equality, class equality, gender equality, etc. I’m thankful that I’ve been able to build myself a platform to address some of these topics, though I know just talking about it isn’t always enough. But, this post isn’t really to address all that is wrong with society (I’ve done tons of that and will continue to do so!) – it’s to show thanks for all the things we do have. Let’s get back on track.

Thankful for My Friends

I have the best friends ever – and that includes my online Twitter friends. I’ve never felt so supported and loved by a group of people in my life. When my relationship ended earlier this year, both my Twitter friends and my real-life friends jumped to my support. It was amazing to see so much compassion from such a diverse group of people, and words will never be enough to express how much that meant to me. 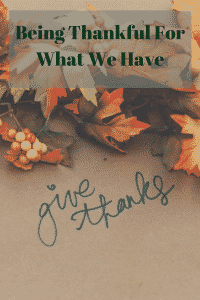 My real-life friends brought me to Los Angeles for a get-away, and it was much needed. That trip helped me really understand my life goals, and get back on the right track to achieving them. And when I got home from that trip, renewed, rejuvenated, and completely over the break up, I met a fellow whose life goals were much more closely aligned with my own.

Thankful for My Partner

I’ve never had a relationship where I would call my boyfriend a true partner before. I don’t have to ask him to do the dishes, make the bed, or do literally anything else around the house. He just does things because he’s actually an adult and knows that things don’t magically get done.

It’s been such a relief to not have to take care of everything anymore. I still have to work my forty hours, but now I have so much more time to come home and work on my side projects, because I have a partner who is helping me with house things. He also edits my blog posts for me, helps me brainstorm new side hustle ideas, and is a great photographer! The best part is that it’s not a chore to get him to help me with this stuff -he wants to be engaged and involved.

That stuff is all great, but the real gem is how compatible we are outside of the side hustle world. We both love books, travel, art, and the metaphysical world. We’ve spent hours just hanging out at bookstores and new age stores; I’ve never had a partner who enjoys those things as much as I do. Of course, we are still in the honey moon phase, but I’m so happy that I can totally be myself with him.

Thankful for Partners in Fire

I’ve put a ton of work into Partners in Fire, and I’ve learned so much from my last two years of blogging. I’m incredibly thankful that I’ve had the opportunity to learn all these skills (a tiny bit of coding, building a website, social networking, affiliate marketing…there’s so much!). Although I haven’t made a ton of money with it yet, the skills I’ve developed and the friends I made have been invaluable.

In fact, I’m using some of the skills I learned over the past two years to create a new website. The sole purpose of this new one is income via affiliate marketing (and maybe a little drop-shopping – still testing that out) so I don’t expect to make the same types of connections, but the lessons I learned in building Partners in Fire have been invaluable, and I think it will help make this new project successful.

I’ve also learned a ton about life and finance through blogging. You might think that as a personal finance blogger I have all the answers already, but I don’t. Reading all my Twitter friend’s blogs have really helped open my eyes to not only financial topics that I had never even considered but also real-life issues that need to be addressed.

Blogging at Partners in Fire has been an amazing journey – I’m so thankful for all that I’ve done with it so far, and looking forward to tons more in the future.

Thankful for My Job and Work Experiences

And that pattern fits for all of my work experiences. I hated being in the military, but my service was the only reason I was able to buy a house in California. That investment is what spearheaded my journey to financial independence. I was able to buy two additional houses after I sold it. So now I have a home that I live in mortgage free and an investment property.

I didn’t particularly like my job in Savannah, but the experiences I gained there and the people I met will stay with me for the rest of my life. The same goes for my job in Los Angeles. I loved living in LA, and I’m thankful that I had a job that allowed me to live my life there with relatively little financial stress.

Having this career path has given me the opportunity to travel the world. I’ve been to nearly 20 countries on four different continents, and knocked some amazing places off of my bucket list (you can read about some of my adventures at Travels Near and Far!) None of that would have been possible in any way if not for the high paying jobs that I’ve had.

I also have the ability to move around the United States with my work. I wanted to leave Los Angeles, and that was possible. Then I wanted to move to Pennsylvania (still trying to figure out why), and I was able to achieve that as well. That ability is largely based on my career, so although I don’t necessarily enjoy the work that I do, I’m thankful for the opportunity to do it.

Thankful for So Many Things

There are so many other things that I’m thankful for- my family, my pets, my health, a good stock market (for now) and tons of things that I probably forgot to list. I’m thankful that we have a holiday specifically designed around giving thanks so that I can be sappy and list all these things!

What are you thankful for this year? Let me know in the comments, and let’s be thankful together!