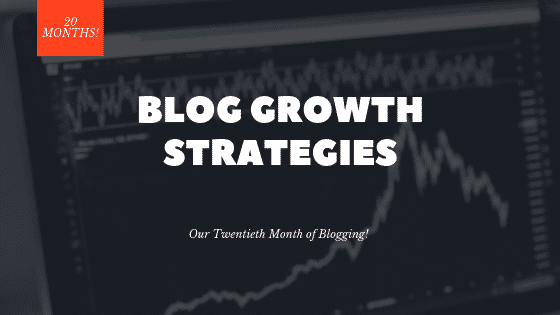 As I said above, we actually had a slight decrease in readership this month. Our averages were pretty similar (between fifty and sixty users per day), but we had fewer peaks and a few more days with less than 50 users. A few of those days can probably be explained by the long fourth of July Holiday (half of our below 50 days were during that time!), but not all of them.

Social Media continues to be the top driver of traffic to Partners in Fire. Pinterest reigns supreme yet again (seriously, you need to get Tailwind!), but Twitter and Facebook are still bringing in consistent traffic.  In total, we had 975 visitors from social media this month, which was a little less than last month.

Pinterest continues to be our top social network, and in fact it was the only network that saw an increase in traffic. In total, we had 751 users from Pinterest during our twentieth month, which is almost 100 more than last month.

Although the two older pins (adult conversations and Twitch affiliates) still drove the most traffic, two of my newer pins (you are not your job and how to not get taken advantage of) are close behind. I’m hoping that creating more pins that resonate with people will ensure that my reach on Pinterest continues to grow.

Even with the increase in users coming from Pinterest, I haven’t yet achieved my goal of 1000 users per month from the platform. However, the pins I designed with Canva and Design Wizard are getting better and better, so hopefully I will get there before the year ends!

The second biggest driver of traffic from social media this month was Twitter. Partners in Fire had 161 users from Twitter this month, which is a slight decrease from last month.  Most of these users came in the last week or so, when I started re-posting links to older blog posts. I don’t know why I struggled with doing that before, I have tons of new followers who probably haven’t seen them, and the life span of a tweet is so short that lots of my older followers may not have seen them either. It never hurts to put a fresh spin on old content on Twitter (unless you are spamming – don’t do that!).

Facebook was the third biggest driver of traffic from social media during my twentieth month, and it’s nothing to be proud of. I only had 61 users reading my blog from Facebook this month, a massive decrease from last month. This was to be expected though – I knew most of my “in real life” family and friends were only reading to learn about the break up drama. Now if I could only get them to be interested in the finance and lifestyle side of things, Facebook would be an amazing traffic source!

I haven’t focused much on my Facebook page either. Unfortunately, I have not cracked the code on how to get page likes (outside of paid ads, which I’m not going to do) or how to drive traffic from my page to my blog. I have tried mixing up the content with memes, photos, other articles, etc., but I haven’t seen enough engagement to stick with any of those things. Maybe I’ll brainstorm a better strategy and try again.

We had 419 users come to our website via direct hit during our twentieth month, which is a slight increase from last month. Most of the increase was likely due to getting featured on Tread Lightly, Retire Early’s Women in Finance Weekly Roundup with my post on How to Not Get Taken Advantage of as a Female Breadwinner. Sometimes links from other sites are recorded as direct hits, and I’m still not sure how to differentiate between the two types of referrals.

The rest of the direct hits came from my awesome subscribers (and we got a few new ones this month too, thanks guys!)

Thank you, subscribers, for always reading when you get a post in your mailbox! If you aren’t subscribed yet, what are you waiting for? Sign up today!

Organic search was our lowest driver of traffic during our twentieth month, and it continues to trend downwards. We only had 355 users from organic search this month, which is a huge decrease from last month. Why are our organic search numbers continuing to decrease?

I’m not really sure what the answer to that is. I expected the decrease during the first week – the fourth of July fell on a Thursday, and resulted in a long weekend. I doubt many people were searching the web during that awesome four-day holiday!

But I also expected the organic search to pick back up after that, and sadly it did not. I’ve been continuing to update old blog posts and optimize them for SEO, but apparently that isn’t working out too well yet.  It’s something that I will continue to work on, and eventually I will crack the code!

We published some amazing content our twentieth month. Most of it fell into two main themes: Our plan to pursue passion fire by living the RV life and societal problems.

My posts on living the RV life are important to me because I have a two-year plan to opt out and do just that. I also want to show anyone else interested in doing it the planning and steps that go into it. I’ll be posting regular updates on our goals and progress, but I’ll also be posting heavily about it on Instagram -so follow me there if you don’t already to see how we are doing!

My other posts for the month were a bit heavy, and dealt with big picture societal problems. I wrote about not being taken advantage of as a female breadwinner, gender and money, stagnant wages, and America’s Work Culture.

I’ve discussed the reasoning behind writing semi-political blog pieces before. I think that it’s important for me to use my platform to discuss these issues and hopefully affect some changes in society. But, it’s also important to note that all of the topics I discuss are intimately related to finance, and the journey to financial independence. My goal is to motivate everyone to seek out their version of financial independence. In order to do that, I need to acknowledge the societal issues that prevent a huge portion of society from doing so.

I discuss monetization every month, and every month it’s the same story. Monetization isn’t quite working out for me yet. But I’m still working at it! When I get it figured out, there will be a huge celebratory blog post about it, I promise!

I did join a few new affiliate programs in July, all of which are related to RVs in some way. These will be important as I continue to learn what life on the road will be like and write about it my transition to full time RV life.

I’m still with my other affiliates: Amazon

, Bluehost, and others – but I haven’t had much success with those yet. I still believe that if I increase my readership, the money will follow.

If my super honest blogging chronicles have motivated you to start blogging, start with Bluehost for as little as $3.99 per month!

We still have tons of room to grow, and we are going to get there. Unfortunately, I didn’t achieve either of my blog goals during my twentieth month. Those were to get over 2000 users per month, and to get more than 20 users per day via organic search. Clearly I’ve been failing at both of those, but hopefully my 21st month will be better (hint – it’s not starting out that way!). That’s ok though – I still have most of the month to improve!