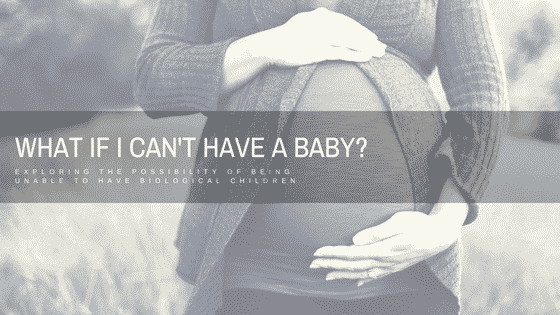 I’m not sure if I want to have children. I’m getting up there in age, and I’m leaning heavily towards “no”.  I guess that’s a good thing, because as it turns out, I can’t have biological children.

It’s a weird thing to write about – not wanting children and not being able to have them – that should be a good thing, right? But it isn’t exactly. I feel like the choice has been made for me. There was a time, not too long ago, where I was seriously considering having kids. Did I decide against it because of how much of a struggle it would be, or because I really really don’t want them?

Even I don’t really know the answer to that. But, I think either way, describing my journey is important, because it might help other women who have similar struggles.

Why I Can’t Have Biological Children

There are a few reasons why I can’t have biological children. And when I say that, I mean the “traditional” way. There might be other options that I could explore, but first, I want to be transparent and describe the reasons why I can’t.

I’m at the point where I’m almost too old to have healthy children. This was the driving force that really made me examine whether I want to have kids or not.

I was nearly 36 when I decided to have this difficult conversation with myself. That is close to the age where any pregnancy would be considered high-risk. It’s also near the tail end of my most fertile years. According to USA today, as women reach age 35 and beyond, it gets harder and harder to conceive. And according to Baby Center, a whopping two thirds of women over forty have fertility issues!

I know the older I get the harder it will be to conceive. That’s why it was important to consider all my options before that window closed for good.

Age isn’t my only issue. I have also been diagnosed with Polycystic Ovarian Syndrome (PCOS). PCOS is a hormonal disorder that affects a women’s reproductive system. It affects the ovaries’ ability to produce and release eggs. Most women with PCOS, even young women, have trouble conceiving because our ovaries don’t produce monthly eggs the way that healthy ovaries do. It’s sporadic at best.  And because eggs aren’t being produced, many women can go months without menstruating.

I’ve always had fairly regular periods.  The longest I’ve had to wait is about 2 weeks. But this doesn’t mean that my ovaries regularly produce eggs. It’s possible that I’m one of the unlucky few who gets periods but no eggs. If I’m not going to get eggs, I’d rather skip the period all together, but unfortunately I don’t really get a say in that.

What Other Options Are Available to Have Children

Since I do struggle with fertility, I decided to research the other options that would be available to me, in case I did decide that I want to have children. The good news is that are plenty of options available for people who struggle with fertility. Fertility treatments and in-vitro fertilization are available to help people have biological children, while adoption and fostering help people who can’t have biological children have families. I’ve given thought to all of these options.

Fertility treatments would have been my top option had I made the decision to have kids. My doctor said that the majority of patients with PCOS can get pregnant with basic fertility treatments.  Usually, this comes in the form of a pill that needs to be taken regularly, and a lot of insurance companies cover the cost.  It’s the easiest and most affordable option, so hopefully, this option will work for most people who have trouble conceiving.

If fertility treatments don’t work, you could also opt for In-Vitro Fertilization. With this method, medical professionals harvest eggs and sperm, make embryos in a petri dish, and then implant these embryos back into the uterus. The technology behind In-Vitro has really come a long way, and tons of people get positive results.

The big disadvantage to In-Vitro is that it’s still very expensive. One In-Vitro session can cost between 12 and 15 thousand dollars! And unfortunately, most insurance companies don’t cover it. Honestly, I don’t think I would pay that much money for the chance of having a biological baby. If my insurance covered most of the cost, I might give it a try, but it isn’t something that I would pay out of pocket for. Raising kids is crazy expensive as it is, I don’t want to add an extra twelve grand on top of that!

Given all of the above, many people still can’t have biological children. But there are still options for being a parent!

The first option everyone turns to when they find that they can’t have biological children is adoption. Many want-to-be parents want a baby to take care of, and adoption is the best option for this. Unfortunately, adopting a baby is just as expensive (sometimes even more so!) as In-Vitro, and has a lot more hoops.

If I were to chose adoption, I think I’d try to adopt an older child in need of a good home. Adopting an older child out of the foster system is the least expensive option.

Given that, I think I would chose fostering over adoption if I couldn’t have biological children. Foster children have things rough. Their parents might be in jail, or on drugs, or abusive, or negligent. Their situations are usually very sad. But it’s these kids that need the love of a stable parent the most. These kids need guidance and support to prevent them from going down the same path that their biological parents went down.  I also think I would have the opportunity to help more children if I became a foster parent than if I adopted.

Don’t get me wrong, I know this is the more difficult path. I can only imagine how heartbreaking it will be to love and protect a child, and then have to watch them return to their abusers. However, if I can provide just a few months of stability, a few months of love, and a few months of showing a child that the world can be better, it will be worthwhile. And maybe I can end up adopting some children out of the foster system. Hey, I might even foster some kids if I can have biological children.

What are your thoughts on being unable to have biological children? If you’ve had experience with this issue, I’d love to hear your story!