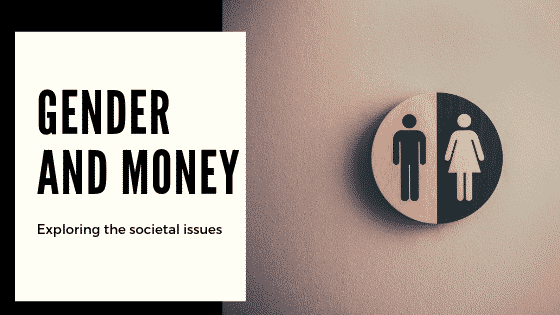 I’ve been thinking (and writing) about the relationship between gender and money these past few weeks, mostly due to my personal experiences with being a female breadwinner (and getting taken advantage of). There are so many issues relating to gender and money though that the problems relating to being the breadwinner are just the tip of the iceberg.

Why Write About Gender as it Relates to Money?

I like to spin Partners in Fire as embodying the spirit of financial independence. My entire goal is to motivate people to live life on their own terms and find ways to pursue their passions. To me, that’s the essence of financial independence. So why delve into heavy topics related to money and gender? Why not just focus on the journey of investing, saving, and pursuing passions?

Well, first and foremost, as a woman, I have experienced some of these issues first hand, and I want to share my experiences. But second, and probably more importantly, my goal is to get everyone excited to pursue financial independence. I want people to read this and say “Yes, I can do that! I really can follow my dreams!”. But to make that happen, we have to acknowledge and work to resolve the systematic issues that keep portions of the population down. Its all well and good to say that I’m pursuing this so everyone else should, but I want to do my part to ensure that everyone can get the same opportunities that I have had. And, since I have a platform (albeit a small one), I’m going to use it to try to bring some discussion to some of these issues.

These Issues are Real

There are so many issues regarding gender and money – they could fill volumes! The most concerning thing to me on this topic is the insistence that some of these issues aren’t real. The gender pay gap is a great example – There is a vocal group of people who will insist that it isn’t real, because if you do a field by field/career by career comparison, the gap all but disappears (according to them). They will argue that a male software engineer with 15 years of experience generally makes the same as female with the same experience. And they might be technically right, but that completely misses the point of the gender pay gap.

Another giant and real issue that disproportionately affects women is the un-affordability of childcare. Childcare is a human issue, but unfortunately our society has decided that the bulk of the responsibility falls to women. Not only that, but we’ve also decided that the work of caring for a child isn’t valuable. Talk about a double whammy. But this is also an issue that a huge group of people decided isn’t real. “Having children was a personal choice” they’ll say. Or “don’t have kids you can’t afford”. These oversimplifications are meant to do nothing more than dismiss the over-arching societal issues that make the most natural act of having children a financial burden for so many women.

Not only are the issues surrounding gender and women very real, but they also hurt women. The fact that women are disproportionately responsible for childcare leads to lower lifetime earnings for women. It hurts their career prospects in ways that don’t affect men.

In the long run, the gender pay-gap and the issues with childcare lead to a retirement gap for women. Because women don’t make as much over the course of their careers and take more time off for children, they earn less in social security benefits and have lower lifetime savings. These limitations, coupled with the fact that women tend to live longer than men, lead to women having a very real risk of not having enough money to last through retirement. Elderly women run a very real risk of falling into poverty as they age.

There are also stereotypes regarding gender and money that have been difficult to eradicate. Women are great at spending money and we lack financial literacy. There are no women in the personal finance space (a big thanks to Angela for making it her mission to dispel that one!). Women don’t work as hard as men thus they deserve less pay (yes, I’ve heard that one!).  Identifying and correcting these myths about women and money isn’t easy, but it’s a crucial step in resolving many of the money issues facing women today.

I understand that there are also unique issues regarding money that men face. Harmful stereotypes and societal expectations aren’t just women’s issues – they are society’s issues. Men are less likely to get approved for flexible schedules to attend to childcare (and are seen as dangerous around children – which isn’t a money issue but it’s horrifying), and face far more societal pressure to be a breadwinner than do women. I may address some of these issues, but as a woman I feel like it’s more appropriate to focus on the women’s issues. So sorry fellows – I’m not going to focus much on men’s issues, but I do acknowledge that they exist.

However, I think that addressing some of the issues that women face (especially in regards to childcare and family leave policies) will improve some of these outcomes for men as a result.  Childcare should be everyone’s responsibility, and society should ensure that father’s get the same childcare advantages that mothers get. Gendered stereotypes that make men out to be “less than” somehow if they stay home with the children are just as harmful to men as they are to women. So guys, I think you should be on board with this. Fixing issues surrounding gender and money will help everyone.

How are we Going to Address these Issues?

This is crux of the problem. How can we solve all these problems regarding gender and money? How do we fix these giant societal problems as individuals?

The first and most important thing that you can do is vote. Vote in every election. Vote for politicians and parties that support and promote policies that address these issues. If we want to solve the problems, we have to address the issues.

But that’s not all you can do. You can use any platform that you might have to discuss and address these issues. Call out the stereotypes when you hear them. Talk about these issues with your friends and family. Get the word out that these things are real, but they really can change.

I’m going to continue to use this blog as a way to support women and call attention to the issues that women face in regards to money. These topics may not always be in line with my personal journey to financial independence, but like I said above, that’s not the only thing we’re about.  It’s important to address these issues to give everyone the opportunity to seek financial independence. That’s an important part of the mission here! There’s no rule that says I can’t do both.

A final thing that we can all do more of is support each other. Women supporting and encouraging other women is such a beautiful thing. We’ve been taught for far too long that we should be in competition with one another, but that couldn’t be further from the truth. Support each other! Lift each other up. Be a role model and mentor for younger women. And let’s work on solving the issues surrounding gender and money together.

3 thoughts on “Gender and Money”