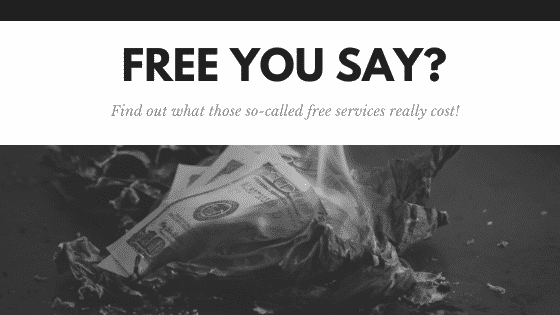 I hate to be pessimistic, but the reality of the world that we live in is that nothing is free. Sure, some websites may offer free access to the majority of people, and some companies may offer freebies, but those things aren’t exactly free. The company is going to get its reward, whether that be with marketing to a new customer, or recouping the loss on other products. Free websites get you in more insidious ways. They may appear to be free to use, but that’s not exactly the case.

There’s another huge portion of the “nothing is free” argument and that revolves around government and taxes. Usually, when you hear the phrase “nothing is free”, it’s from folks who don’t support increased government spending on social programs, because nothing is free and somebody will have to pay for those programs in the form of taxes. Although that’s true in the strictest sense, there is a lot of nuance that is usually dismissed in that argument.

So now we have two very different understandings of the idea that nothing is free, one focused on consumers and corporations, and the other focused on government and society. This post isn’t meant to take a stance on taxation or what services the government should and shouldn’t provide. This post is meant as a warning to consumers to be wary of anything marked as free, because nothing is really free. But, the most common use I’ve heard of the phrase “nothing is free” is generally in regards to government spending, so I’d be remiss if I didn’t mention it.

There’s are so many products, services, etc. that market themselves as free to use. The best examples of this can be found right here on the interwebs! There are tons of websites that pretend to be free to use (I’m looking at you, social media!) but are they really free? Sure, you don’t pay money to access them, but what do you pay? What do you give up to access these so-called free websites? The reality is that you are giving away your data. These companies are making bank off of your use of them. You are the product, not the consumer in this instance.

The User is the Product

There’s a reason why Facebook, Instagram, Reddit, and all of your favorite websites allow millions of people to access them “for free”. Its because the end users aren’t actually the consumer on these sites, they are the product.  The websites collect your data and either sell it to the highest bidder (ok, a little hyperbolic, but you get the point) or use it to allow other companies to target you with their advertisements.

This congressional inquiry, done way back in 2012, highlighted how companies use these so-called free platforms to harvest your data and sell it to marketing companies. Nothing came from this inquiry, so rest assured that the same tactics are still continuing to this day.

Don’t get me wrong. I love social media. I’m on all of the websites. But, I’m a realist about it. I know they are collecting my data, stalking me, and even listening to my private conversations (seriously – how did Facebook know to show me an ad for pirate clothing when I mentioned to my boyfriend that I wanted a pirate dress?? Stuff like this happens all the time). I understand that harvesting and collecting my data is part of their business model when I use the website. My biggest issue with companies who do these things is that they aren’t exactly public about it. Everyone knows (now) that they do it, but they don’t like to disclose it. That’s a bit shady to me.

Social media marketing is also a booming industry, with you as the product. It’s forecast to grow into a 48-billion-dollar industry by 2021. Much of that includes paying celebrities or influencers to endorse specific products (which is regulated by the FTC, but often ignored, so you might not even know you are seeing an advertisement). Another portion of that is buying ad space on social media sites with “promoted” posts. Pretty much every social media website now offers ad space on its network.

It’s not just social media websites that use this tactic. If you do google search for literally anything, the first few results that pop up will undoubtedly be advertisements. It’s getting to the point where the first page of search results is almost all ads! Do you think that Google cares that you didn’t want to see ads with every search? They don’t. They care about increasing revenue by getting you to click those ads, and harvesting data on what searches are most profitable. And guess who is providing them with that data?

Websites that don’t collect your data do have a greater sense of being free. But they aren’t entirely. Most will have advertisements, sponsored posts, or marketing strategies somewhere in them to try to get you to buy something. I don’t even pretend that Partners in Fire is an exception. I’d love to have enough money to make it entirely free, but I don’t. Therefore, I do place ads and affiliates on my website, hoping that a few people will give me a click and I’ll make a little money. Most websites do (there are still some that don’t, which I admire, but remember, those folks are still paying to run the sites – it isn’t exactly free for everyone).

There are potential freebies all around us, outside of the internet. Free seminars, buy one get on free deals on products, etc. are all pretty common. But these things usually do come at a cost. Unless the seminar is being put on by the government (and thus paid for with tax dollars) it’s not really free. They are getting you there to push you to buy something.

The best example of this is free tickets to tourist attractions in exchange for going to a time share presentation. Yeah, you get to go to whatever awesome place for free, but you just sold two hours of your time to the slickest sales people on the planet. Most raffles, seminars, and other freebies are the same (don’t even get me started on those stupid mailers from car dealerships where you have to go to the dealer to see if you “won”). They are just trying to get you in the door to sell you more stuff you don’t need.

Is Anything Really Free?

I’m clearly a pessimist, and there might be stuff out there that truly is free. Help me out readers! Tell me about something that really is free!