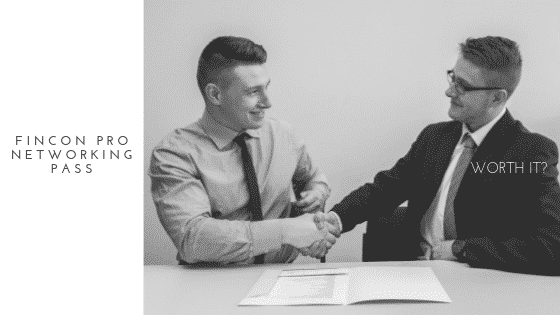 Last week, I published a post on my first Fincon (and what an amazing experience it was!). In that post, I briefly mentioned the Pro-Networking pass. I wanted to write all about it in the original post, but I had so much to say about it that it needed it’s own post! So, read on to find out whether you should get a the Pro-Networking pass at Fincon!

Should You Get  A Pro-Networking Pass at Fincon?

Networking is one of the post important and powerful things that you can do. So, it seems like getting a pass is a no-brainer, but that’s not entirely true. Whether you should get one or not depends on your goals and priorities.

If you are coming to Fincon specifically to meet brands and network, then the Pro-Networking pass is probably for you. It gives you the opportunity to meet privately with up to 12 brands for 10 minutes – getting exclusive information on how to use their program, what they offer, and determining whether it is the right fit for your platform. You also gain access to a private networking mixer, which gives you the opportunity to mingle with these same brands in a more relaxed setting.

How to Use the Fincon Pro-Networking Pass

The Fincon Pro-Networking Pass is actually a pretty cool tool if you know what you are doing. With the pass, you can schedule short one-on-one meetings with brands that are looking for affiliate marketers and partners. These brands are generally also at their expo table, but the networking pass gives you their undivided attention. Meeting with these brands will not only give you a foot in the door, but it will also give you an idea as to whether your website would be a good fit. This is vital information that is sometimes difficult to find online.

To get you started with the scheduling process, Fincon will send you and email letting you know that the online scheduling program is open. To get the most out of the pass, log in and check out which brands are available as soon as you receive the email. Then decide which brands you want to meet, and request a meeting right away.

Unfortunately, I had no idea what I was doing, and by the time I actually looked at the schedule, most of the meetings were all filled up. Don’t be like me. Login and schedule meetings as soon as you can!

One on One with Brands

Even though I waited until the last minute to schedule things, I did get a ton of value from the pass. I met representatives from Blue Host, CJ affiliates, Webpals, and Upsart. They all gave me wonderful blog post ideas, and helped me think of ways to incorporate affiliate marketing into my writing while still maintaining value for my readers. That was a extremely valuable for me, since it was something that I had struggled with in the past.

Another benefit is getting to know someone personally. I was already working on getting affiliated with Upstart before the conference started, but it was great to meet face to face with the person who had been helping. Now, when we email, we know who we are talking to, and that personal touch can go a long way.

Other brands that were available at Fincon 19 were Bankrate, Vanguard, Flex Offers, and MoneyWise. Obviously, no one quite knows who will be at the next Fincon, but I’d imagine some of the same ones will make an appearance. Remember that brands like Vanguard and Bankrate fill up their time slots quickly, so schedule right away!

The Pro-Networking pass also included the opportunity to have a fancy, sit-down lunch with a brand. The scheduler automatically assigns you to a brand for this lunch, but you can cancel that and sit at any open table available. I was scheduled with representatives from Huntington Bank, and I chose to just go with it. I learned about their business model, and learned about how they are trying to incorporate affiliate marketing and influencer partnerships into their marketing model. They in turn introduced me to The Motherhood, an agency that actually tries to match brands and influencers for partnerships. All in all, I’d say the lunch was very successful (and it was delicious!).

There was also a private mixer for Pro-Networking Pass holders (which also had delicious food and gave you one free drink ticket). While enjoying the tasty offerings, I met with a representative from Bookeeping.com. We discussed possible affiliate marketing opportunities and ways we could help each other. I also met with a few other companies that were looking for affiliate marketing partners and potential sponsors.

Although it’s true that most of these people were at Fincon anyway, I don’t think I would have met them without the Pro-Networking pass. It gave me the opportunity to discuss things with them in person, learn about their businesses, and find out if working with them would be a good fit for me.

Who Doesn’t Need the Pro-Networking Pass?

Not everyone needs the Pro-Networking pass. To be honest, as a first time Finconer and newbie blogger, the pass wasn’t as beneficial to me as it could have been. First, I was pretty overwhelmed with just taking in my Fincon experience, and second, I didn’t really know how to use it (but hopefully this post helped you with that!).

When I bought my pass, it was super early so things were very cheap.  The automated system asked if I wanted to upgrade to a pro networking pass for an extra hundred and fifty bucks. Having no idea what it was, I was like “sure, why not?” and I did. I then proceeded to ignore it until two days before Fincon. This probably wasn’t the answer, and definitely wasn’t the best use of the Pro-Networking pass.

Hobby bloggers, first time Finconers, and people who are already doing amazing jobs of monetizing their blogs and networking with brands probably don’t need the Pro-Networking pass. People like me, who procrastinate and won’t get the full value of the pass don’t need it either.

Who Needs the Fincon Pro-Networking Pass?

The Pro-Networking pass would be an invaluable tool for those ready to monetize their blog, and even those who are ready to take their monetization to the next level. The one on one meetings were amazing resources, but probably better suited to bloggers who already know what they are doing (I didn’t even know who half the brands there were).

But even if you aren’t at that level, and want to explore it, the pass is beneficial. I learned that I can link to a specific product rather than just a brand using CJ affiliates, which is something I would have never even considered without that one-on-one meeting.  You don’t know what you don’t know, and the networking pass can help fill in some of those gaps.

Am I Getting the Pass Next Year?

I struggled so hard with this decision. Was the pass worth the $150 to me personally, and will I get it again next year?

Although the food was amazing, the mixer was tons of fun, and I had great experiences with the brands that I met, I decided against the pass for next year. The only reason that I’m skipping it is that I’m bringing my partner to the conference (and paying for his ticket, since this is kind of my thing). I decided that I’d rather have him with me than get the Pro-Networking pass.

The funny thing about this is that I never considered taking my ex with me, even though we were doing My Boyfriend Sucks with Money when I bought the fincon tickets. I didn’t even tell him I bought the tickets until a week later. I guess I knew deep down things weren’t’ going to work out, and I have a much better feeling about it this time.

Should You Get the Pro-Networking Pass?

If you read through all the benefits that I listed of the pass and thought “Yes! I need that!” then you should definitely get the pass! If you read through it and though “well, maybe that would be cool” then you should also get the pass. You have to try things that you are on the fence about to find out if they are for you, right? My advice to anyone wavering about it is give it a shot! You will definitely gain value from it, even its just in the form of delicious food!

If you got a Pro-Networking pass at Fincon 19, I’d love to hear your take on it as well! Leave a comment, and let’s discuss your experiences with it!