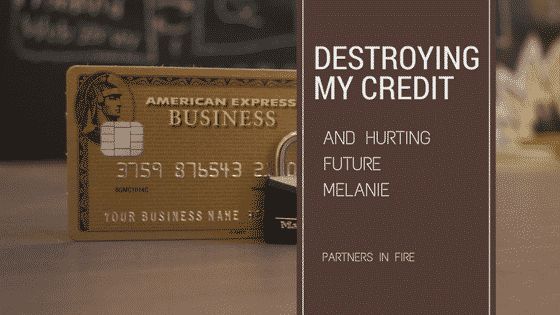 I’ve been nostalgic lately, thinking about my past, my upbringing, and some of the wonderful financial decisions I made when I was a teenager. I’ve written about my middle class upbringing and about my stellar education on taxes. But there was one more area of my financial life that I really messed up when I was young, and it took me a very long time to dig my way out. I’m talking about destroying my credit.

When I say I destroyed my credit, I don’t mean that I got into a little bit of debt, or that I took out a stupid student loan. I went nuclear. I got all the store credit cards I could get, a few general credit cards, and took out some student loans for college. All without have a job to pay them back! Super smart moves, don’t you think?

I had three regular credit cards and three store cards before I turned 19. Why wouldn’t I get an Express credit card? I had a Victoria’s Secret card because god forbid I buy cheaper under garments that I could actually afford at Target. I even signed up for an Abercrombie card despite never ever shopping in an Abercrombie in my life!  Free money is free money, right?

My parents never really taught us about the dangers of credit card debt. When I turned 18 and started getting offers for free money, I took them. I don’t know why it was so easy to get credit as an eighteen-year old with no credit history, but man, it was.

Yes, I was a stupid teenager buying all the things with fake money. But I did actually make one legitimate purchase that I couldn’t afford!  My dog, Shadow (I miss him!) had a problem with his nose. It always looked like the skin was peeling off. Since he seemed healthy outside of that, my parents didn’t take him to the vet.

Well, I wasn’t going to let my lack of money prevent me from taking care of my pup, so I took him myself and charged it. I think it cost around 500 bucks if I remember correctly (this was a long long time ago). Either way, I didn’t have the money to pay. That was future Melanie’s problem.

Related: Managing Your Money All-In-One For Dummies – Get it on Amazon!

The rest of my purchases were stupid. The hottest trends in clothing, stupid toys, long distance phone calls, things I can’t remember. I had a lot of fun destroying my credit!  Unfortunately, I was thousands of dollars in debt by the time I turned 20. And I had no money to pay it.

I did manage to make the minimum payments for the first few years, but that barely covered interest. Before long all the cards were maxed out. Even the minimum payments became overwhelming for a poor college student. Many of the companies charged off the debt and sent it to collections agencies.  I had effectively destroyed my credit.

Digging Out of Debt

I finished college and realized that if I ever wanted to have a decent job and a decent life, I needed to fix my credit issues. It was overwhelming. I still didn’t have a ton of money, and I owed over a thousand dollars to six or seven different creditors. Because I was just out of college and making so little, I couldn’t even afford the minimum payments on all of the loans. And, to make matters worse, most were already in collections, and they wouldn’t even accept minimum payments.

Using the Snowball Method to Pay off Debt

I wasn’t completely out of options though. A few of the cards were still open, and I vowed to fulfill my obligations and pay them off. I used the snowball method for these open lines of credit. With this method, you identify the bill with the lowest balances, and put all of your extra money towards paying that off while making minimum payments on everything else. Once that balance is paid off, you put everything extra towards the next balance.

Because you are adding the previous card’s minimum balance every time you pay off a debt, your payment amount “snowballs”. In this way, you end up paying off the higher balances faster than you would think. Although it’s not the most financially sound method (paying off the highest interest cards first with the avalanche method is cheaper in the long run), paying off a complete card gives you a psychological boost, and sometimes we need that.

Unfortunately, many of my cards were past the point of the debt snowball. These lines of credit were in collections, and had been for many years. The collections companies definitely weren’t interested in minimum payments. They wanted the full amount, and they wanted it now.

The good thing about collections companies is that they buy the debt from credit card companies at a fraction of the price. This means that you can sometimes get away with paying less than owed. Many of these companies will work with you on negotiating a pay off amount, if you can’t afford the entire balance.

I do need to advise caution with this method though. Although the creditors will stop harassing you, your credit report won’t improve immediately. It will be reported that you paid less than the full balance. These balances will show up on your credit report as “settled“. This is better than having it shown as open, but it will still take seven years for these settled debts to fall of off your report.

I was able to settle with a few of the collections agency for less than owed, and I payed off other balances in full. It took a lot of saving, budgeting, and negotiating to dig my way out, but I made it.

How Destroying My Credit Affected My Life

Destroying my credit had lots of negative repercussions for many years. It takes about seven years for  settled accounts and charge offs to fall off your credit report, and life was hard for those years. It was hard to rent a nice place with such a poor credit history. I had to pay higher interest rates on any loans I tried to take out, such as a new car loan.  I couldn’t even consider buying a home.

Another thing people don’t tend to mention about being in debt is how it can affect your job prospects. When I first started digging out, I tried to get a job at the local Target. Unfortunately for me, Target (and tons of other low wage employers) run extensive background checks on prospective employees. I didn’t get the job because my credit was abysmal. How do you get out of debt when companies won’t hire you because of your debt?

I did get lucky enough to find an employer that gave me a chance (or didn’t check my background – either way, and that helped me finally be able to dig out.

I’m glad that I finally dug my way out and that all those negative statements are off of my report. I still maintain a bit of credit card debt (unfortunately every time I get it close to paid off, I have another emergency). But instead of thinking “well that’s future Melanie’s problem”, I think “How can I help future Melanie?”. I think about those things before pulling out my credit card, and life has been better.

Have you had problems with credit in the past? I’d love to hear your stories!

6 thoughts on “Destroying My Credit and Hurting Future Melanie”