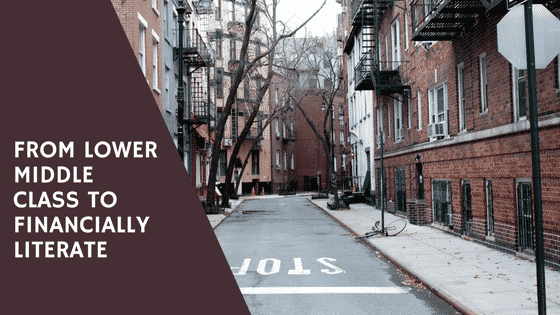 Sometimes people see a personal finance blogger striving for financial independence and think that we must have grown up with well-off or financially savvy parents. Well, that isn’t always the case. I’d classify my parents as lower middle class, and let’s just say I didn’t learn any positive financial skills from them!

I know that a lot of people had things way worse than me. It’s also true that I got fortunate with a few of my choices, and many people who make similar choices may not have the same luck. However, I think it’s fair to point out that you don’t have to come from wealthy parents who are good with money to get on a quest for financial independence (though I’m sure it helps!)

I honestly don’t know my household income when I was younger. My parents owned a home in the southern suburbs of Chicago. We always had food to eat, we got lovely Christmases, and we went on vacation (camping) a few times per year. Seems solidly middle class, right?

However, we did live across the street from some pretty terrifying apartments that had cops patrolling more often than not.  I’m also pretty sure our neighbor across the alley got busted for dealing LSD. It wasn’t the best neighborhood, but it was far from the worst. We could play outside without fear as long as we stayed away from the apartments, which is a luxury a lot of kids didn’t have.

When I was tiny, my father worked as an insurance agent. He sold insurance in Chicago’s terrifying ghettos (shameless plug, but he wrote a fictionalized account of his experiences, Check it out on Amazon!

). This job didn’t make him well off, but he made enough money to support the family.

Unfortunately, when I was still in grade school, my father lost his job with the insurance company. My parents turned to paper delivery to make a living. My siblings and I had to do paper routes three days a week after school to help them make ends meet.

For the first few years, this was unpaid labor. At the time, I didn’t understand why I was forced to work for free, but I get it now. They needed free labor to keep up with the bills. We were working to support the family. Please don’t be too harsh on my parents for this. They did what they had to in order to survive. Many kids had things far worse, and my parents did the best they could.

To my parent’s credit, they took what they learned, delivering papers for someone else, and made a business out of it. They started hiring more neighborhood kids to deliver flyers for them, and they started paying us for our work.

Unfortunately, even with running their own business, there wasn’t much left to save at the end of each month. Or maybe my parents prioritized vacations and nice Christmases over emergency funds and retirement accounts. Either way, they had no savings.

They spent most of the money they made each month and allowed the kids to do the same. If we wanted something super expensive, they would tell us that we needed to save up on our own for it (my brother was obsessed with getting Scottie Pippen shoes, so he was the best about that!), but that was the extent of our lessons in savings.

I did have a little bit of savings, in an account that was set up by my grandmother when I was born. However, most of that was wiped out the first time I had to pay taxes.

My parents got divorced when I was in high school. My dad kept the business and was able to rent a home from his sister, while my mom had nothing. After our family home was foreclosed on, she had to go live up north near her parents.

To be honest, though, their divorce worked out in my favor. It’s way easier to get loans for college if you are a child of divorced parents with low incomes.  I got enough financial aid money to pay for my entire college education (via loans and grants, mostly). I didn’t use all of it because I decided to join the Reserve Officers Training Core (ROTC) when I got to college, which helped pay for my schooling (My first great financial decision!)

Even now, neither of my parents is good with money. I don’t think either of them has a retirement plan or a solid emergency fund. They both work, and I think they plan to continue working until they can’t anymore. Social security has helped them immensely.

My siblings and I learned very different things from this upbringing. My brother learned that he could get by with working until he dies. He doesn’t worry about saving money and values spending everything he earns on making sure his kids are happy (Just like my parents did).

My sister was the same for a very long time.  She valued appearances and expensive things because she didn’t want to feel poor.  However, in the last few years, I have helped her learn the value of saving money for the future through my obsession with financial independence. She wants to pursue FIRE too!

I went the opposite way. I saw that my parents were barely keeping their heads above water and decided that wasn’t what I wanted for my future. Therefore, I took it upon myself to learn financial literacy. I’ve made many mistakes along the way, but I think I’m getting there.

The point of this story is that learning financial literacy is not easy, but most people can learn it. It isn’t taught in school (at least it wasn’t in my school!), and if you don’t grow up in an environment where it is practiced every day, it’s hard to grasp.

However, that doesn’t make it unattainable.  It would have been great if my parents could have given me a head start on this, but they couldn’t. Instead, I learned the value of hard work and that I didn’t want to be destitute in the future. These were useful lessons too, and I’m glad I got them.

What did your parents teach you about money?

5 thoughts on “From Lower Middle Class to Financially Literate”