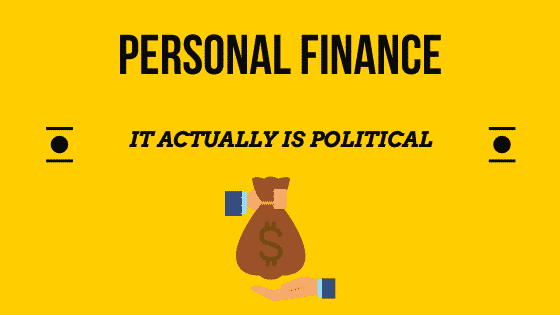 How many times have you seen a personal finance writer, blogger, podcaster, etc. say that they don’t discuss politics on their platform? How many finance groups, on Facebook, Twitter, Reddit, and anywhere else, have a rule that talking politics is strictly prohibited? It seems like every single one has taken this stance, and honestly, I don’t understand it. Personal finance is political. To pretend that it’s not is to pretend that government policies don’t impact our daily lives. They do, probably more than we imagine.

As you can see, the intersectionality between personal finance and politics is huge. It affects all aspects of our lives. And yet, there are still a ton of people who refuse to acknowledge this stuff on their platforms.

Understanding the Ban on Politics in Personal Finance Communities

But, even at that, do understand the blanket ban on politics in most of these forums. Our political affiliations are incredibly important to use, and sometimes we get overly emotional about our opinions. A political disagreement can devolve into a cage match of insults and bullying. Nobody wants that in their group. It’s difficult to moderate while maintaining a semblance of impartiality. And none of us is truly without bias.

Political discourse over policy can also morph into partisan politics. A simple statement about healthcare can turn into an anti-liberal or anti-conservative diatribe. This type of vitriol has no place in a group that wants to be open and inclusive of people from all walks of life. It’s easier to create an all-out ban of these topics than it is to facilitate healthy, thoughtful, and most importantly, kind conversations about these topics.

Those reasons that lead to outright bans on political discussions on financial forums are the same reasons why many influencers in the finance sphere choose to avoid the topic altogether. Everyone can get value from a post on how to budget, for example, regardless of political leanings. There are tons of topics we can write about that don’t have a political slant, and I don’t blame anyone for sticking to those topics. It’s hard to publish content that might be taken poorly by any segment of the population – it’s easier to stick to safe topics. I get it.

No one wants to get “canceled” by any portion of their audience by having the wrong political view. So instead of causing waves, we avoid the topics and write about stuff that everyone can agree on, like index funds are great investment tools, and it’s a great idea to have an emergency fund. That stuff is super safe, and helpful to pretty much everyone.

Don’t Pretend its Not Political

But the thing that gets me is when people pretend that personal finance is not political at all. That’s just disingenuous. There are tons of policies in place that affect people’s money. These policies have different impacts based on a variety of factors, including as race, gender, and class. Pretending that it isn’t real hurting the people that we are trying to help.

Pretending that everyone is capable of achieving financial independence is unfair, and it hurts the communities that have been left out of the conversation. Even saying that everyone can build an emergency fund, or spend less money, or find a better job, or any other basic finance principle that’s often touted as “easy” shows a blatant disregard for the fact that there are people who literally can’t do those things.

If you’re not sure what I mean when I say that there are systems in place that actively prevent people from achieving these same goals, check out this post on the poverty trap. It’s a very real phenomena that’s happening right now in the United States. Listen to this podcast from Journey to Launch about the Black Tax, and learn about how systematic racism has prevented people from gaining wealth. This stuff is all very real – but it’s considered political so we shy away from it; ignore its existence. I don’t think we can do that anymore.

What Should We Do Instead?

Again, I get not talking about. I may seem like I don’t, but I really do. It’s hard to have these conversations, and it’s hard to sell some of the things we, as bloggers, publishers, podcastors, and creators are trying to sell when we make allowances that it’s not achievable for everyone.

But that doesn’t mean we should ignore it. Instead, we should acknowledge the simple fact that all of our advice may not work for everyone. That’s all I’m asking for. And stop with the “well I did this, and you could too if you weren’t (lazy, uneducated, lacking desire, etc.). The fact that someone out there did the thing does not mean that everyone is capable of doing the same thing. Our differences in that are what makes us unique, and it’s important to acknowledge.

The most important thing we can do though is vote. We all know that there are policies in place that keep people poor. Some are specifically meant to target certain races and ethnicities (I’m looking at you – War on Drugs! But there are plenty of others). So let’s use our votes to dismantle these policies. Let’s make sure we go to the polls, and understand where each and every politician stands on these issues before giving them our vote – regardless of the little letter next to their name.

But we can affect change before that. We can call our representatives and demand that they change the policies. Our voices matter, if we use them. We don’t even have to risk our blogs or our livelihoods by writing about it.

I know this came off as a little ranty – and I apologize for that. But I’m tired of people pretending that these two things aren’t related. And I get that it’s hard to talk about it, to write about it, to address it in any way without risking our audiences and potentially our livelihoods. But if your platform is really about helping people, isn’t helping everyone by drawing attention to these things and working to change them one of the biggest things you can do? Wouldn’t that help the most people?

I think it would, even with my tiny little platform. So I will keep writing about the political aspects of personal finance, and hopefully, you will join me. Hopefully together, we can influence change in our society, and help ensure that everyone who would like to seek financial independence has a path towards it.

2 thoughts on “Personal Finance is Political”