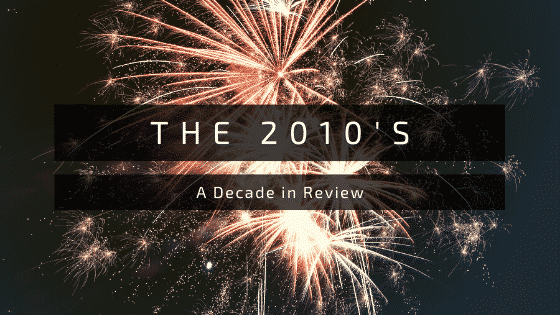 Personal growth is important, but sometimes it’s hard to examine. But the end of a decade is the perfect time to take a step back and reflect on those things. That’s why I decide to do a decade in review.

The 2010s have been a wild ride. I’ve lived in three different states, had a few relationships, and learned a ton about myself and who I want to be as a person. Let’s see where that all started.

Iraq and Leaving the Military

My decade began with a deployment. I went to Iraq sometime in 2010 and returned in 2011. Although I wasn’t thrilled with the military prior to deployment, going overseas was definitely enough to show it wasn’t for me. I didn’t agree with the mission and I’m not a fan of the strict rules. I left the military shortly after returning home, and I couldn’t be happier with that decision.

That’s not to say that being in the military was a bad choice. I’m incredibly glad that I did it, and thankful for all the things I learned while serving. Being a military leader helped develop me into the person that I am today. Who knows where I’d be now if I hadn’t joined.

Being in the military also put me on my path to financial independence. There is no way I would have been able to buy my first house in California without my military service, and we all know that having that asset is what propelled me on my journey.

Buying my home in Southern California was one of my best decisions of the decade. I bought in 2011, when I got home from Iraq. I used a VA loan, which meant I didn’t have to make a down payment or pay PMI. There’s no way I would’ve been able to afford a home in that area without that program.

2011 was a time when homes were still relatively inexpensive. I bought for a great price, and lived there for over five years. During that time, I watched property values slowly increase, and I started getting more and more disillusioned with the idea that we have to throw away the best years of our lives working at miserable jobs. I sold the house in 2017 for a pretty nice profit.

Although I was making some great financial decisions, my relationship decisions were severely lacking. In 2012, I decided to enter a relationship with an alcoholic. We had been friends for over ten years at this point, and I offered him the opportunity to move to California and get his life back on track. Unfortunately, I didn’t realize how bad his drinking was (and it got steadily worse) or that he had un-managed bipolar disorder. These are things I discovered throughout the years.

I’d like to say that I was smart and ended the relationship as soon as I figured it out, but alas that’s not the case. I spent the majority of the decade in a relationship with this man. He sucked the life out of me, emotionally abused me, gaslit me, and took advantage of me. I wrote about this relationship right after we broke up, and you can read the whole story here.

Life Lessons are Hard to Learn

You’d think that I’d have learned my lesson after that, but life doesn’t always work out that way. I was vulnerable and seeking validation. When I met someone, who acted like I was the most amazing person on the planet, I was smitten. It was so refreshing to be with someone who paid attention to me, especially after all those years of misery.

Unfortunately, it was all just an act. He saw my vulnerability and used it to manipulate me. He love-bombed me while stealing from me. Whenever I questioned it or felt something wasn’t right, he would throw my previous relationship in my face “I’m not him”- he would say. I later learned that this was all a manipulation tactic to keep me thinking he was this great guy who truly loved me and wanted to be with me. In fact, he was just putting on a show so he could use me. And when I finally starting putting all the pieces together and really questioning him about it, he left.

But Some Amazing Friendships

The amazing friendships I developed over the decade helped make up for my sub-par romantic relationships. Although my relationship was terrible, one thing I’m proud of is not allowing it to distance me from my friends. We had girls’ trips, weekend get-aways, monthly nights out, video game nights, happy hours, and loads of other fantastic adventures together. They were always there with a non-judgmental ear if I needed an outlet (though I usually pretended things were okay and kept the misery to myself – they knew though).

My friends were also there for me during my most recent breakup. We live on opposite sides of the country now, but it’s just a short flight out to see them. Spending a weekend with them reinvigorated me, and helped me remember what I really wanted. Since that last trip, I’ve been refocused on my goal of financial freedom, and I have my friends to thank for that.

One amazing thing I was able to do this decade is travel. I took my first international trip in 2011 when I got home from Iraq. During that trip, I visited London, Paris, Florence, and Rome, and was hooked. Prior to that, I had always known that I wanted to see the world, but as I never had the opportunity, I didn’t really know what I was missing. Well now I know. Since then, I’ve been to 12 more countries on three different continents. And I have no intention of stopping!

In fact, one of my reasons for pursuing financial independence is so that I can see more of the world. I want to spend at least a year traveling all around this planet of our, meeting new people, seeing the sights, eating the food, and exploring the cultures. A lot of kids take a gap year to do those things now a days, but I didn’t have the opportunity back in my college days, so it’s something I’m going to do when I’m a bit older.

As I mentioned above, my time traveling is what first piqued my interest in the financial independence movement. I wanted to spend my life traveling. But how?

Reading travel blogs led me to financial independence blogs (I can’t even remember the first ones I read – sorry!). I realized that I didn’t only want to travel, I wanted the freedom to do whatever I wanted. I quickly realized that I’d never have that freedom while living in Los Angeles. All of my money was going towards my mortgage every month – I could hardly save anything. Something had to change.

That’s when I discovered the wonderful idea of geoarbitrage. I could move someplace cheaper, cash out on the house, and save money. So that’s exactly what I did.

I started Partners in Fire towards the end of the decade, but this isn’t my first attempt at blogging. I started a book blog early in the decade that I didn’t even register a domain for and went nowhere. After that, I did a little writing for Hubpages – which I really enjoy but I don’t have the time for with my own blog.

Although it didn’t start until the end of the decade, Partners in Fire is where I saw the most success with my blogging journey. I’m so thankful that I started it.  Partners in Fire has become such a big part of who I am. Blogging at Partners in Fire has taught me so much about SEO, web design, social media marketing, and the blogging world in general. Being active in the finance communities on Twitter and Instagram has led me to even more amazing friends and my tribe. I’m very excited to continue this journey into the next decade and see where it takes me.

I was pushing thirty at the beginning of the decade, and now that it’s at an end I’m closer to 40. I’ll be nearly fifty the next time a new decade rolls around! Time sure flies, doesn’t it?

I think I’ve grown a lot over these past 10 years. Instead of just floating through life, doing what I thought I was “supposed to be doing”, I’ve determined what I really want to be doing, and made a plan to go after it. The plan is still a work in progress, but I think I’ll be able to achieve it withing the next decade (hopefully much sooner than 10 years though!).

I’ve also come to have a much better understanding of politics and the world we live in (I once wrote a post on an old blog about how you shouldn’t have kids if you’re working minimum wage – so cringe and classist!). My political views have greatly evolved since then, and I’ve come to understand how the system works to keep people in poverty. I try to use my small platform to bring light to some of these injustices.

My net worth has grown throughout the decade as well! Although I wasn’t keeping track, I know it was in the negatives. I had student loans, car loans, credit card debt, and a pretty hefty mortgage. I didn’t know anything about investing, but had about 10K in my infant 401K.

At the end of the decade, my 401K has grown to over 150K,I have two homes (one mortgage free, and one I’m renting), and I’ve paid off both my student loans and my car loan. I still carry credit card debt – but my goal is to be rid of that before the end of the next decade. My total net worth is over 200K. With all the financial knowledge I’ve gleamed over the past few years, I know I can more than double that in the coming decade.

Your Decade in Review

How was your decade? How did you grow, what did you learn? Are you the same person that you were 10 years ago? I’d love to hear stories about your decade in review in the comments!