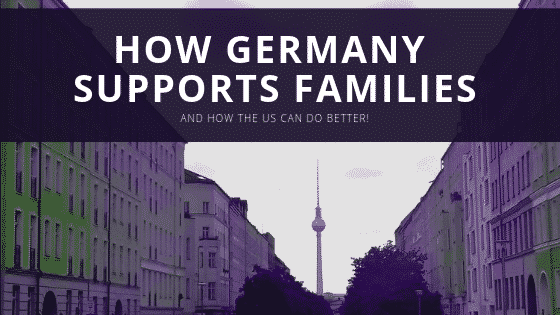 I am a US citizen. I want to believe that the United States is the best country in the world. That message was shoved down my throat for as long as I can remember. In school, I had to stand for the Pledge of Allegiance. The public school system taught me that our constitution is the model for the civilized world, that we are the great saviors of the world, and that capitalism is the greatest system ever created. I was also taught that our rugged individualism is a trait to be revered. If you can’t achieve success, it’s your fault and yours alone.

But when I became an adult, my perspective changed. I traveled; explored Europe, and made friends in other countries – specifically Germany. I learned that Germany supports its families, and the US is sorely lacking.

How Germany Supports its Families

Did you know that new parents in Germany get up to a year of parental leave without risking their jobs?  Or that the government provides for 67% of their income while they are on that leave?  Can you imagine how helpful such a program would be to families in the United States? We can barely get twelve weeks of unpaid leave here! Unless you are on the higher end of the income scale, you can’t afford to take time off work to bond with your new baby. We can do better.

Germany supports its families with childcare as well. The system that my friends explained to me is freaking amazing!

The children start daycare at around 1 year old. Every child is guaranteed a spot in the state-run daycare, and it’s affordable for pretty much every family. The maximum price is around $200 per month. Families in the US can expect to pay that much each week!

But that’s not even the best part. Kids aren’t just dropped off at the day care for nine hours like they are in the US. In Germany, they wean the kids into daycare. For the first few weeks, the parents take them to the daycare for just a few hours and stay with them. After the kids are comfortable being at the daycare with the parents, the parents start leaving them there alone for short periods of time. Over the course of a few weeks, the time gets longer and longer, until the child is comfortable staying at the daycare during the full work day. How cool is that?

I’m not going to go into the specifics about how the system works, like any system it’s a bit complicated with tons of exceptions and nuance. If you want to know more of the specifics you can find it here.

In a nutshell, Germany has a Universal multi-payer healthcare system that incorporates both government funds and private funds. All citizens are required to have it. It costs 14.6% of your income, which is split between the citizen and the employer. It’s also capped at a maximum income amount, so the most any single person would pay is 360 Euros per month. This includes coverage for all non-working dependents as well. The system covers in-patient care, outpatient care, and basic dental. As far as I can tell, there are no copays, deductibles, or co-insurances. You pay your monthly premium for all the healthcare that you may need.

Germany also supports its families by providing paid time off for illnesses. Germans citizens can take up to six weeks of fully paid leave for a sickness or injury in a six-month period. If the sickness or injury lasts longer than six weeks, they are covered by a statutory (government provided) insurance for sickness, where they receive up to 70% of their pay for as long as 78 weeks.

German citizens (along with the rest of the EU citizens), get a minimum of 20 paid vacation days every year. That’s four full weeks of vacation time! Americans struggle to get two weeks per year. Isn’t that insane? Clearly, companies in Germany have found ways to stay afloat while also offering their workers decent benefits and a good work/life balance. Why can’t the US do the same?

How do they Pay for it?

You’d think that with all these fancy programs, tax rates in Germany would be astronomical. But they really aren’t that bad. They range from 14% to 45%. That’s not too far off from the US’s rates of 10% to 37%, yet they get subsidized child care, universal health care (yes, they pay that in a different way, but so do we!), parental leave, and sick leave. If they can do it, so can we!

We Can Do Better

I wrote this post not to showcase how lacking the US’s system is, but to show that we can do better. Germany doesn’t even have the best system (I think the Scandinavian countries are generally the top rated, but I don’t have any friends who live there). We have quite a few models from other countries that we can look to for building our own system that actually works and supports people. Why don’t we? Why are Americans opposed to supporting families? We can  clearly do better,  don’t you think?

*Disclaimer – this post was written based off conversations with my Germany friends, so I apologize if my numbers are a bit off or if I got some small details wrong. The details aren’t important. The important thing is that Germany support its families and is still a competitive, modern society . We could do the same.