Well, this definitely isn’t the post I planned on writing for this week. I was going write about grocery shopping, or reaching Coast FI, or something finance related. But that was before my worldview fell apart. That was before my boyfriend told me he doesn’t love me anymore.

I’d like to say I was blindsided. You don’t just wake up one day and stop loving someone. But I wasn’t really. Things hadn’t been great for over two months. I was short on money after paying so much to move, and he resented the fact that I expected him to contribute. He also resented that I wouldn’t buy him anything that he wanted, and that I caught him using my money to buy himself stuff he wanted.

His actions showed his resentment.  He wasn’t as affectionate, he didn’t seem to have any interest in spending time with me, and he was always in a grumpy mood.  We tried talking about these things, I’m all for having adult conversations when I don’t think things are going well. The only way to make things better is to talk about them, right?

Unfortunately, he lied every time we had a conversation. I told him again and again that I didn’t feel like he loved me, but he insisted that was nonsense. He said he was stressed out at work, and I believed him.  He also told me he was just unhappy here in Pennsylvania. I believed that too – I’m not exactly happy here either. Just last week we discussed the fact that we were both unhappy here, and tried to find compromises that would make us both a little happier. If you didn’t notice, most of those compromises involved me having to pay for more stuff. I didn’t realize it at the time, but his unhappiness was stemming from his free ride ending.  I thought we were getting back on the same page and working to fix things, but I was wrong.

Things Come to a Head

Things came to a head over a long weekend. I had been trying to get us some alone time together – time where we could actually go out and engage with each other and reignite some of the passion. He was pretty grumpy and miserable on his two days off the previous week, and wasn’t interested in doing anything. But he had all day Sunday off, and he promised me good times and engaging fun. I even found a few awesome brew, wine and food festivals we could go to for some fantastic adult alone time. 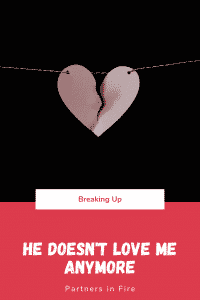 Unfortunately, none of that worked out the way I planned. He wanted to see his daughter this weekend (we had her the full weekend last weekend) so I found a fun block party we could take her to on Saturday night. The plan was to hang out with her for a few hours, then take her home. Instead, he asked her if she wanted to stay the night, and of course she did. I was a bit disappointed, because that meant no adult fun time (our bedroom doesn’t have a door!), and I expressed this to him – but he said it will be fine he will drop her off on Sunday morning and we will have the whole day together.

On Sunday morning he decided he wanted to keep her all day. Now this is the part where I probably come across as the bitchy evil girlfriend. I got mad. I told him this relationship wasn’t working, and I was tired of not being a priority. Of course, he made it about her – he said I don’t love her and I don’t want her around. But that’s not the case, and he knows it. I love her. I watch her while he’s at work so he has more time with her. Heck, I was the one who got us moved to Pennsylvania so he could be in her life more! It’s outrageous to suggest that I just don’t want to be around her. All I wanted was a good day with him so we could find our spark and work on fixing us. As it turned out, he wasn’t interested in that at all.

Why Doesn’t He Love Me Anymore?

When we got home, we had “the talk”. He finally admitted how unhappy he was in the relationship, and admitted that he doesn’t love me. He said he isn’t happy with anything, and doesn’t want to be in a relationship with anyone. Unfortunately, he couldn’t exactly pinpoint when or why things changed, or why he fell out of love.

I asked him why he wasn’t honest with me before. We’ve had this conversation so many times, he’s had ample opportunity to tell me. But he said he didn’t want to hurt me, and he thought it would just get better. Things don’t get better by ignoring them, and instead the distance between us grew.  He said he wished he could find a way to be happy here, but he’s not and he doesn’t know the way forward. He does know that he doesn’t want to keep hurting me, and he doesn’t want to continue pretending things are ok when they are not. The truth of the matter is that he never loved me in the first place, and stopped pretending to when the money stopped flowing.

My Boyfriend Never Actually Loved Me in the First Place

It’s been over a year since this break up, and I’ve learned a lot about myself and my issues with codependency. One of the major things that took me months to realize is that this dude never actually loved me in the first place. He was a user who saw how vulnerable I was after escaping an emotionally abusive relationship, and saw me as a mark that he could abuse financially.

And that he did. He had me paying for everything for him, including a move to Pennsylvania so he could be closer to his daughter. I paid for his food, his drink, his nights out, his child support, his living expenses. And the second I told him it was too much, that he needed to stop wasting his money on stupid crap and start helping me recoup the savings I lost while moving, he turned. He started withholding affection. Cheating on me more often. Not caring about the relationship at all. After all,when you are only with someone for their money,and the money stops flowing, why should you keep pretending to care?

A Note on Emotional Abuse

I know not all relationships are emotionally abusive. Most probably aren’t. But, if you have any question as to whether what you are experiencing in the relationship is emotional abuse, get some help. This type of abuse usually fits a consistent pattern. The behaviors to be cautious of are:

If any of these words seem all too familiar, or if you aren’t sure what this type of behavior actually looks like, check out my e-book, this is abuse,  at your favorite retailer. It highlights these behaviors in my relationship with an abuser, and shows how that relationship led me right to someone who would take advantage of me financially.

He Doesn’t Love Me Anymore What Do I Do?

If you’ve been together for a long time and neither of you want to give up, the only way to improve things is to go to couples therapy.  However, if he doesn’t want to try, don’t try to force it.  Make a plan to exit the relationship and exit each other’s lives.

The problem that most people in this situation run into is that they don’t believe it, or want to make it better. The thing is, it won’t get better. There’s a reason why the love was lost (everything happens for a reason, after all) – and trying to force it rarely works. Holding on to that hope that things will change when his actions and words have made it clear that nothing will is just setting you up for more heartbreak in the long run. Let it go and find someone who really does want to be with you. I promise that someone is out there.

13 thoughts on “He Doesn’t Love Me Anymore”