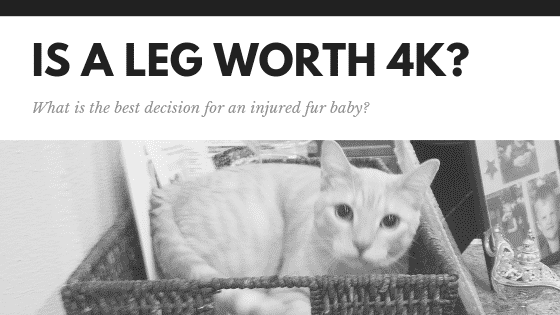 Have you ever come home to the terrifying realization that everything isn’t ok? That was me, on Monday. When I got home, my dog Coyote was acting odd. He wouldn’t come out to greet me, but kept barking at me from the living room. Weird. When I got to the living room, I noticed my journal ripped to shreds. Ugh, Coyote had gotten it again. I thought this was why he was acting weird. But when I went upstairs, I realized how wrong I was.

Our house is super old, and we bought it knowing there were  some things that needed to be fixed. One of those things is a slightly uneven floor. When we first moved the furniture up there, we noticed that the dresser was a tad bit wobbly, but both Brian and I shook it (pretty hard) and it seemed stable enough so we thought it was fine. We were wrong.

When I got upstairs, the first thing I saw was the huge dresser (the tall kind, chest of drawers?) was toppled over, drawers down. Cleopatra, one of my babies, was sniffing around it. My first thought was terrified panic – what if someone was crushed underneath?

I went into super-woman adrenaline mode and lifted the thing right up! Thankfully, there was no one underneath, but Dumb-Dumb and Caesar (the absolute best cat ever!) were still unaccounted for.

A Word about Caesar

I know its wrong to play favorites. But I can’t help it. Caesar is, and has always been, my favorite. He’s my spoiled little brat darling little angel. He gets away with crap that no one else would even try to get away with. He gets a little bowl of milk whenever I have cereal. We chase each other around the house. He comes to me whenever I call him. Even Brian’s eight-year old daughter makes fun of me for spoiling him so much!

Caesar has literally saved my life. When I was struggling with depression and contemplating suicide, thinking that Caesar would be left out in the cold was one of the main things that stopped me. I know it sounds odd to live for a cat, but when you are that low you should live for whatever you can. Whatever keeps you going is what you live for. In those dark moments, it was him. I’m in a much better place now, but Caesar still holds that special place in my heart. He’s my baby.

Since I had already been downstairs and seen Iris and the two dogs, I knew the most likely place I’d find Dumb-Dumb and Caesar were up in the attic. As soon as I got up there, Dumb-Dumb came running to me. Caesar was in the far corner, laying on the floor, looking up at me. Thank god they were all alive! I started calling out to Caesar, but he wouldn’t get up. He just howled at me. I knew something was wrong.

I went over to him, and he still didn’t move. And then I noticed his leg – his poor little right hind leg jutting out at on odd angle. My baby had broken his leg.

A Trip to the Vet

He didn’t just break his leg though. He fractured it in three different places. The femur had 2 separate fractures, and there was a third in the socket of the ball & socket hip joint. The vet said that there was also most likely (but undetermined) a fracture in his last vertebrate, which may have damaged the nerve leading down to that leg. That’s a rough break for a cat.

I also think this is a great spot to add a shout out to the vet. I went to Hope Veterinary Clinic in Malvern, PA (right outside Philadelphia) and everyone there was amazing. Thank you for being so great to my baby!

The vet said it was possible to save the leg. It would require intensive surgery with rods, pins, and screws. It would also require at least 8 weeks of being confined to a crate (but most likely 10 or more), and a few follow up visits to ensure everything was setting and healing correctly. The list of possible side effects was long and included improper fusing, a higher chance of developing arthritis, possible pain due to nerve damage, and possible improper healing due to his age (he’s 11). There was also the possibility that they wouldn’t even be able to fix the fracture in the socket joint. Caesar would be able to walk with that fracture, but he’d always have a little bit of pain.

The other option was amputation. The list of side effects was far shorter -the only negative the vet stressed is “what if he losses his other leg” and I really hope I’m never in this type of situation again. The recovery time is far shorter, and he’d only have to spend one night away from home.

Is a Leg Worth Four Thousand Dollars?

So now we get to the four-thousand-dollar question: is my baby’s leg worth four thousand dollars? Absolutely it is!  But I can’t just look at the cost of each procedure. I have to take my baby’s quality of life into consideration. The vet said that cats do extremely well with three legs, especially when they lose a hind leg. He said that most cats adapt and are just as fast, agile, and energetic as they were with four.  He also said that it was a very real possibility that saving the leg would slow him down and even cause him pain – due to all the complications listed above.

The recovery time also played a role in my decision. Caesar is an energetic and rambunctious little dude. I couldn’t imagine keeping him cooped up in a crate for 8-10 weeks. He’d be miserable!

I’m not going to lie. This was a harrowing decision. All I want is what is best for Caesar. It’s horrible to have to make a decision for someone who can’t decide for themselves. I think I’d want to keep my leg, despite the complications. But then again, I don’t have three more, and I can tell the doctor if I’m feeling weird and he can fix it. Caesar doesn’t have that option. Would I even know whether he was in pain or not? Would the stress of further vet visits and operations due to complications be too much for him? Is the thought of losing a leg worse for me emotionally than it would be for him physically? I honestly don’t know the answer to that.

I think as pet owners; we have to do our best to make decisions that are best for our pets. I know losing a leg will be an adjustment for him, but I do think that in the long run, it was the best option with the fewest complications. I hope I made the right decision for him

The Means to Decide

I am extremely thankful that I’m in the financial position to be able to ponder whether a leg is worth four thousand dollars or not. Many people would have no choice but to amputate, because they couldn’t afford the extra four grand. That’s a huge amount of money!

But I’m painfully aware that other pet owners may not even be able to afford the three thousand dollars for amputation. I’m so thankful that I’ve had the ability to save money, build good credit, and not live paycheck to paycheck so that when situations like this arise, money is not a factor in making the best decision for my baby. Having options is one of my primary reasons for pursuing financial Independence, but I never in a million years thought these would be the options. Life definitely likes to throw us curve balls. We have to be as ready for them as possible.

7 thoughts on “Is a Leg Worth Four Thousand Dollars?”