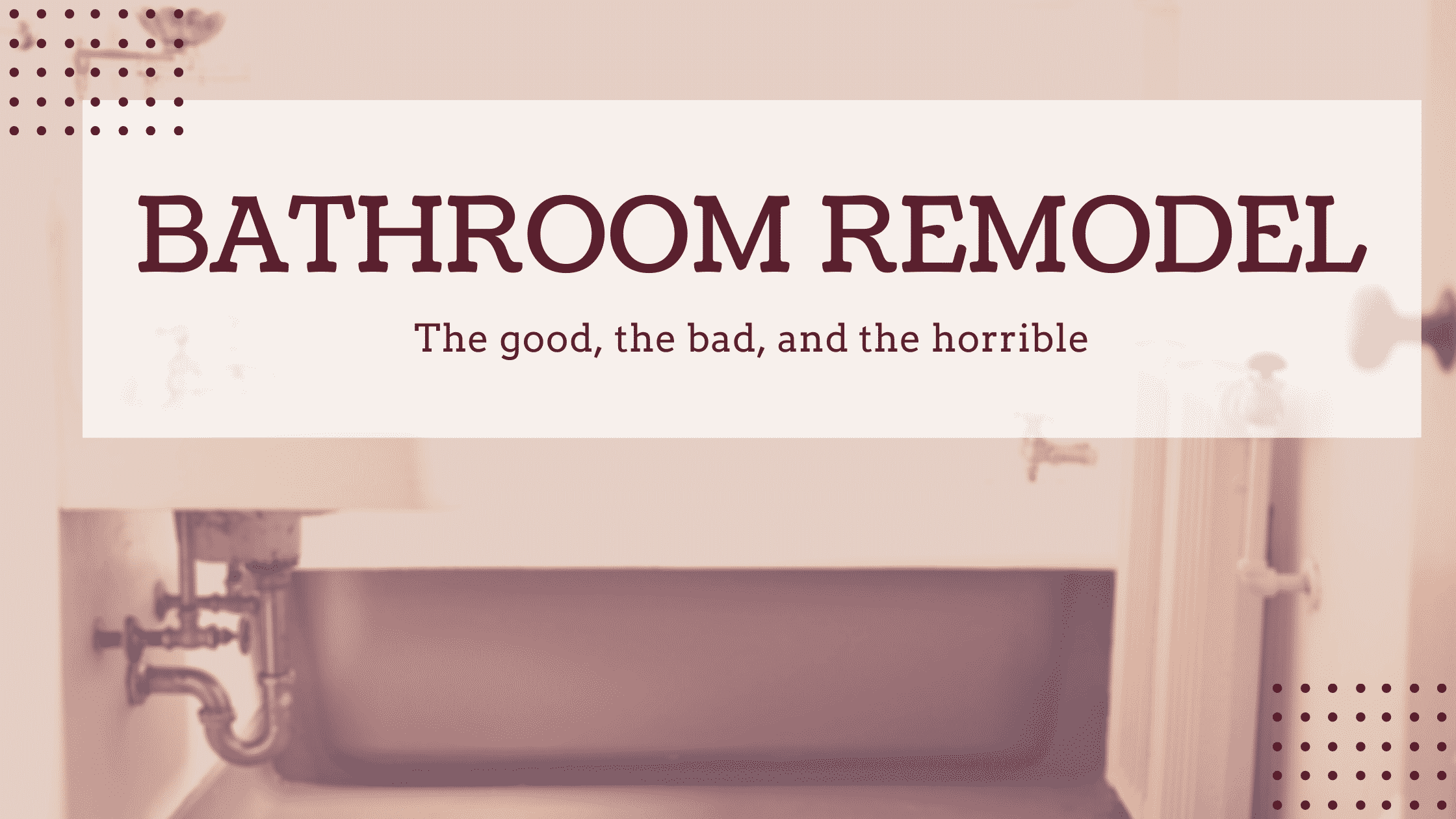 When Melanie first bought a fixer-upper, she thought it would be fun and easy to renovate an entire house. How hard could it be? Well, extremely freaking difficult, as it turns out. I think she finally figured out how difficult home improvement is when attempting the first big job: remodeling the bathroom.

Thinking Remodeling the Bathroom Would Be Fun

My father had several “dream jobs” he says he passed up for various reasons. One he reminisces about often, archaeology stems from his love of history, as well as Kate Capshaw, I suspect. I wouldn’t be surprised if there’s a fedora and bullwhip stuffed in the back of his closet, but so far, his love affair with the past has only manifested itself in the form of a metal detector.

You have to admit, even if there’s no heap of treasure to find, digging up pieces of past lives is pretty cool. Last week an orange-sized marble appeared under the dirt in our garden. You get to wondering who put it there and whether you’re the first person to receive whatever message they meant by burying it. My father goes out looking for places a 160-year-old war might have carried soldiers and the detritus they left or lost along the way. A damaged belt buckle became trash to some mysterious soldier, then treasure to my father a century and a half later.

But there’s a dark side to history you really don’t want to dig up. There are things that happened in the past you will wish you didn’t know. If you’re not familiar with the sorts of nightmares I’m referring to; you haven’t experienced real terror until you try renovating a century-old house. No matter how well its bones hold up against the years, it’s the shoes of variously qualified renovators that came before whose footprints you’ll find. More often than not, they left botched repairs over other botched repairs, and you’ll have to rip through layers before you realize: nothing you do is going to make that bathroom floor level without rebuilding the rest of the house.

Why We Started Remodeling the Bathroom

It starts off with a plumbing malfunction. You start thinking; this might be the time to update those green-enameled bathroom fixtures, replace the curling linoleum with something cleaner, pull down whatever they put on the walls thinking it was hip during the 70s, and admire a bright, clean job well done.

It doesn’t sound too difficult; you can lay some cheap tile, hang fresh drywall and give it some paint, and figure out what your new fixtures need to mesh with the old plumbing.

Your tile looks terrible from the imperfections in the floor; they don’t make tubs small enough for that space anymore, the walls either bowed over time or as a result of installation, and the toilet is so starved for space you have to prop your feet on the storage shelves if you intend to sit down. Did I mention there’s no light switch in there? That’s because there’s no light to turn on in the first place.

The First Signs of a Problem

The top layers are easy. They aren’t even attached to anything in the first place. Layers two and three are the problem. The mindsets of each generation of renovators become more obvious as you go. The latest DIYers, whose curled linoleum you rip up, are actually two generations back. The latest owners didn’t even have the wherewithal to do a terrible job on the upstairs bathroom. No, you can gauge their capabilities by going downstairs and looking at the strips of white duct tape covered in a sponge-paint mimicry of the surrounding wallpaper.

Pulling up Pepsi boxes used instead of subflooring and cabinet doors that must have seemed like the cost-effective way to replace sections of plywood should be the first sign the worst is yet to come. The new flooring won’t sit right if the foundation isn’t level but rip up the old plywood, and the problem becomes apparent. The original house was sagging before they added an entire floor upstairs. Between the mind-boggling curvature of the floor studs and the excess pipes left over from the original plumbing back in the early 1900s, the room should probably be rebuilt.

The only feasible solution is to sister fresh studs up against the beams, build frames for the loose pipes left dangling through to the floor below, and take the walls down to the lathe. Here’s the part where a respirator is the only reason you aren’t getting treatment for mesothelioma before the next decade goes by. They used plaster and asbestos, and both will make you consider burning down the house for the insurance money instead of fixing a room that’s actually smaller than a mid-sized SUV.

What is the Cheapest Way to Remodel a Bathroom?

So, why did we decide to continue with the bathroom remodel ourselves rather than hiring contractors? Well, there is the fact that you could buy a mid-sized SUV for the price a professional will ask. Our best offer started at $11,000 before anyone even stepped through the front door for an inspection. You can buy the fixtures and the basics for around $1,200, though I wish that were the total cost of the job.

After you spend $200 paying a landfill to let you dump your historic toxic waste, you’ll still need plywood, flooring, drywall, and plumbing essentials to replace the ancient steel pipes your modern fixtures don’t recognize. All said and done; we spent a little under $5,000, which included some power tools that you’ll need if you aren’t keen on watching summer and fall disappear from a cramped DIY prison cell.

I won’t waste time going through the details of what you can learn in a few hours watching youtube. Some really nice tongue and groove waterproof vinyl flooring came on the market in the last decade. You’d be crazy to put laminate down in a bathroom, but that’s exactly how this material looks. And it’s a helluva lot easier to handle than tile and grout. The other thing to know, if the plumbing seems daunting, is that all measurements use the inside diameter of pipes. When a hardware store employee enlightens you to this fact on your fifth “dammit” trip to exchange things that won’t fit, I promise you it doesn’t carry the same level of epiphany.

What Tools Do You Need for Remodeling a Bathroom?

Among the necessities are a battery-powered reciprocating sawand the right hardware for the specific job. A reciprocating saw makes quick work of any minor cut, with the added bonus of reaching stubborn nooks and crannies, especially if you have a rage-inducing radiator that constantly seems to threaten the room beneath with lethal baptism. Any jigsaw will take care of the cleaner cuts if you get the right bits.

Lastly, the one truly essential ingredient for success is a patient partner who knows to laugh it off whenever a fit of profanity-laced rage sends pets into hiding and sawdust into your spaghetti pot below. DIYer-be-warned, your sanity depends on this one key element. I can’t guarantee your safety when the internet fails to help you fool the arson investigator, and you find among the charred bits of your home that the only thing to resist being consumed in the bathroom that was always going to win this fight.

Is it Worth it to Remodel a Bathroom?

After all this, I’m sure you’re wondering if we think this was all worthwhile. Was remodeling the bathroom on our own worth it? Well, it did save us at least five thousand dollars. That’s a huge plus.

But do yourself a favor, install some wheels on your new bathtub, so that if you end up having to hire a professional anyway, you can take some comfort from the fact that, though you had to sell your car to pay for the luxury of taking a hot bath, you can still go through the Dairy Queen drive-thru when you have to.

1 thought on “DIY: Remodeling the Bathroom – The Good, Bad, & Ugly”