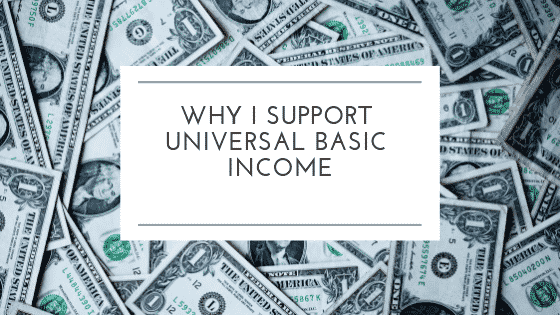 A few weeks ago, I wrote a post explaining the basics behind universal basic income. I never said whether I supported the idea or not, but this post answers that! (Hint – check the title!)

I know, it’s a crazy idea! How would any government be able to afford to pay all of its citizens a monthly stipend? The logistics of that are insane! I’m not here to talk about how it could be implemented or how we would pay for it. I know that would be a long process with a lot of compromise; and I know I don’t have all the answers.  I’m just going to talk about why I love the idea of Universal Basic Income.

It seems weird for a finance blogger to advocate for a program that makes it easier for people to not save money. But hear me out! Universal Basic Income would help tons of people achieve financial independence in the most basic sense.  If people had enough money to pay for their basic needs each month, they wouldn’t be forced to waste their lives working menial jobs that they can’t stand but that also don’t pay enough for them to be able to get ahead. People wouldn’t have to work two minimum wage jobs just to make ends meet.

I know that opponents of this program will use this as an opportunity to say that we would lose tons of workers and society wouldn’t be able to function; but that brings me to the next major reason why I support universal basic income – automation.

Automation is going to be the number one destroyer of minimum wage jobs in the future. The consulting firm Mckinsey reported last year that almost 30% US workers are at risk of being displaced by automation by 2030. That is a whole lot of people that are going to be out of work – and the majority of them work in the menial low wage jobs that I described above.

Sure, automation will create new jobs just like the industrial revolution did, and just like all major technological advances have in the past. But what people forget is that during the transition, people suffer. Unskilled workers who can’t find jobs in new industries suffer. Families that lose their only sources of income suffer. Yes, society will eventually even itself out and adapt, but we can do better than we did in the past. We can do better to ensure that this transition is smoother and better for the working class than previous shifts have been. I think universal basic income is a great method of easing this transition.

I also support universal basic income because I think work is overrated. I get that things need to be done, and we have to pay the bills and all that. However, I think that the American concept of valuing work just for work’s sake is insane. Why should we be forced to spend forty hours per week in an office when we can get all of our work done in 20 hours? Why do we only value each other based on our salaries rather than what we contribute to society?

I think that if we implemented an idea as crazy as universal basic income, people would stop working just for work’s sake. They would start living their lives, and I think a big part of that would be making a positive impact on society. People would take care of their elderly parents rather then sticking them in a home. Families could have more time with their children rather than relying on day care, schools, and television to raise them. People would volunteer with organizations that they believe in, and would have time to pursue their passions, create art, invent things, be innovative. As it stands right now, most people don’t have time to take care of themselves much less volunteer for anything else.

A few months ago, I wrote a post on what I think family values truly are and why we should support them. I support universal basic income because I think it would be a great way to support all of those family values that I wrote about. It would help people afford healthcare, education, and homes. It would also give families more options in deciding how to care for their children.

Yes, I know my liberal is showing. Sorry about that! But we need to admit that income inequality is becoming a huge problem in the United States. The top 1% of households hold more wealth than the entire bottom 90% combined. That’s insane! I’m not advocating that the working class seize the means of production (socialism) but I am in favor of a safety net that ensures every person the ability to meet their basic needs in a civilized society. Wages aren’t exactly cutting it at the moment, and neither is the gig economy. I’m sure there are alternatives to universal basic income that would fix these problems, but this post isn’t about those!

What about they guy who just plays video games in his mom’s basement??

There are plenty of great arguments against universal basic income, but this post isn’t about that (does anyone want to do a guest post of why they are against it though? It would be a great debate topic!). The only argument against it that I’m going to address in this post is the one that makes no sense to me. I hear a lot of people say that they are against universal basic income because they think that Joe Schmoe will sit in his mom’s basement wasting his payment on video games and Cheetos. My answer to this is: So what?

So what if a small percentage of people use this as an excuse to not work? They are still putting their payment back into the economy. They aren’t hurting anyone.  All the Joe Schmoe’s could even band together to rent their own house and play video games together all day! They would be providing someone with rental income and keeping Pepsico stock up – both good things for the overall economy.

Do you Support Universal Basic Income?

So now that I’ve showed my cards and my support for universal basic income, I’d like to know what you think! Do you like the idea or not? Tell me why in the comments!

6 thoughts on “Why I Support Universal Basic Income”