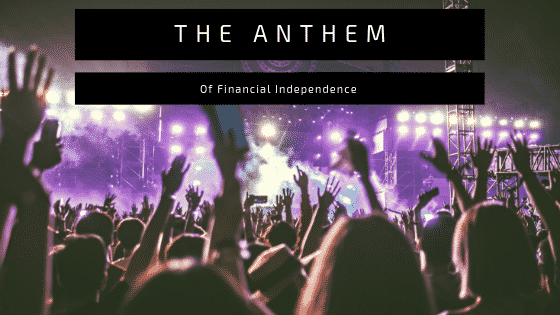 Every great movement needs an Anthem – an amazing song that sparks comradery, joy, and excitement. I’m going to take it upon myself to declare the Anthem of the financial independence movement – firstly because I know of a great song that’s a perfect fit and secondly because no one else did it yet (that I know of!).

The Anthem of Financial Independence

I know you are all dying to know what song I’ve unilaterally decided should be the Anthem of Financial Independence. That song is…

The Anthem by Good Charlotte!

Every lyric of Good Charlotte’s the Anthem is about living the way you want to live. The first verse implies that the life society dictates for us isn’t all that it’s cracked up to be. They stress the monotony of modern society with their first few lyrics:

“It’s a new day, but it all feels old, it’s a good life, that’s what I’m told, but every day it all just feels the same”

He goes on to express that he hated high school and felt stuck while he was there. I don’t necessarily agree with his take here, because I think schooling is important, but I do agree that they system we have in place doesn’t work for everyone. We should have more opportunities for kids who don’t do well in traditional educational environments, and people should have more options than just school – work – die.

The second verse is just as fun and even more in line with the tenants of the financial independence movement. It’s all about opting out of the life that society dictates, and living life the way you want.

“Go to college, or university, get a real job, that’s what they say to me. But I could never live the way they want”

Ditching our real jobs and not living the way they want is the entire point of the financial independence movement! At least it is to me. I don’t want to be stuck in a “real job” until I’m 65, and then live the rest of my life too old to do anything. That’s not a life to me. And I think a lot of us are interested in financial independence for that very reason!

“I’m gonna get by, and just do my time, out of step while they all get in line. I’m just a minor glitch so pay no mind”

Although I think the movement is gaining traction, I don’t think we are in line with the majority. We are all minor glitches in the giant cog of work-retire-die. A lot of people think the whole idea of financial independence is ridiculous and unachievable. So they get in line with capitalistic culture and materialism. Pay no mind to those of us looking for something different – outside of reading our blogs of course!

The chorus of the song definitely embodies how I feel about the system.

I don’t want any part in it! Who wants to be like the average person living a miserable life because they are doing what society told us we need to do? Not me!

It was so tough to pick an Anthem of financial independence! There are quite a few songs out there that embody the spirit of the movement. The two closest runners up for me were “Festival Song” by Good Charlotte (I swear they aren’t even my favorite band!) and “The Nights” by Avicii.

I was super close to naming this blog “I don’t want your 9 to 5” after Festival Song. Lyrically, this song does just as good of a job at embracing living life on your own terms as “The Anthem”.

I mean, that really does embody a huge part of financial independence, doesn’t it? Although the lyrics are great, I chose “The Anthem” instead because it’s much more upbeat, and I think the anthem of financial independence should make you want to get up and dance. It should pump you up! Festival song is great, but it’s too whiney to make a good anthem.

How many of us are pursing financial independence so that we can live extraordinary lives? I think that’s a huge goal for most of us! “The Nights” by Avicii, to me, is all about living an amazing life.

“Someday, we’ll leave this world behind, so live a life we will remember”

Although I do love the theme of living an extraordinary life that this song embodies, there is nothing in the song that speaks to me about opting out of what society expects. You can live the type of life Avicii extols quite easily by spending all of your money. None of us are into that. Therefore, I don’t think it qualifies as the anthem of financial independence.

What do you Think Should be the Anthem of Financial Independence?

I think I made a great case for the Anthem, but I’d love to hear your thoughts! What song gets you pumped up about your decision to seek financial independence? What song can we all band around and call the true anthem of our movement?

5 thoughts on “The Anthem of Financial Independence”