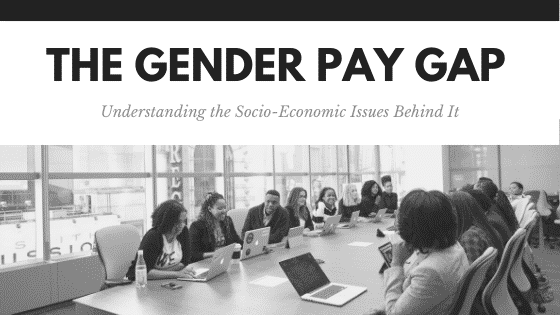 Let’s get one thing straight right away. The gender pay gap is real. Women, on average, make 82% of what men make. This is data taken directly from census data.

I don’t think that most people deny the existence of this data. But what they do deny is the fact that this is a huge socio-economic issue. Pay gap deniers will say that it’s because women choose lower-paying professions, women choose to exit the workforce to take care of children, and women choose work-life balance over salary. It’s a woman’s choice, not society, that is perpetuating the pay gap.

It’s true that when you control for things like qualifications and current position, the pay gap decreases to 98 cents per dollar. This means that women with the same jobs, titles, and qualifications as men make nearly what men make (nearly, but still 2 cents less per hour). This is much better than the 79 cents per dollar overall, but people who only like to look at this number are missing a huge piece of the puzzle.

The gender pay gap goes way beyond these two statistics. It’s not a woman’s choice perpetuating it, it’s society.

Why is there a Gender Pay Gap?

There’s a gender pay gap because women are forced into lower-paying professions, women have no option but to exit the workforce or take flexible jobs in order to afford childcare, and so-called “woman’s professions” are deemed less important than men’s professions.

If there’s one thing that you need to take away from this post, it’s this: The gender pay gap is real, and there are socio-economic forces behind it. Women don’t want to be paid less. They aren’t making these choices because they want to. They are making these choices because they have to. Because society is still telling us that some work is better suited for women, and that work isn’t valuable.

The most obvious example of so-called women’s work is childcare. Women are still expected by the majority of people to stay home with their children. That is work and it’s unpaid. There was one politician who proposed a policy to help stay-at-home moms and to show that their work had value, but society isn’t really ready for that yet.

I understand that people are resistant to paying others for raising their own kids. But why are childcare workers also paid so little? Daycare costs an exorbitant amount, but the people (usually women) who work there are barely paid minimum wage. The average salary for child care workers in the US is only $22000 per year.

I already know your next argument. It takes a ton of skill to be a construction worker! Of course, they are paid more! You don’t want houses to fall down, etc. etc. etc.  I’d argue that it also takes a lot of skill to take care of a child (and a ton of skill to take care of multiple kids at the same time!). You need to be a mom, a nurse, a psychologist, a nutritionist, and a teacher all at once. You also have to deal with parents who think their kids are god’s gift to the planet.

I don’t envy the women in these positions – it sounds like hard work. It definitely sounds harder than convincing someone to buy a car! It’s just not valued in the same way.

But something even more disturbing is happening. Studies have shown that once women enter certain fields, those fields start paying less. Fields that were predominately male get paid less and less as more women enter them. It appears as though the job is deemed “less important” once it’s discovered that women are not only capable of doing it, but want to do it.

It’s all fine and well to say she’s choosing that. But really, she’s not given much of a choice. The majority of Americans still think that childcare is the woman’s responsibility. Many jobs still give women more flexibility and leeway than they give men. Women are expected to take this time off, men are ridiculed and punished when they try to do the same. Yes, the gender pay gap affects men as well!

How Do We Solve the Gender Pay Gap

I’m not a politician, and I don’t have all the answers. I don’t know if there is a way to quickly and easily solve this, but I do think there are incremental things we can do to help. The first thing is to offer paid parental leave. Not only do we have very limited maternity leave in this country, but we also have no paternity leave. How can men and women be on equal footing in the workplace if they aren’t on equal footing when it comes to raising kids? If only women are offered time off for the arrival of a new child, then companies will continue to discriminate against women.

Next, we need to push for paid time off and reasonable working hours– for everyone. Our work culture continues to push for people to dedicate their lives to their jobs, and unfortunately, that doesn’t leave a lot of time for families. Women are choosing lower-paying jobs that allow them more flexibility so they can be home with their kids because someone has to be. I think we as a society have forgotten how valuable child-rearing and family time is. Maybe we should start valuing something other than profits (yes, I know, what a pipe dream).

What Are Your Thoughts on the Gender Pay Gap?

What can we as a society do to help erase this gap? Obviously, there is one glaring thing I left out of this post, and that’s the misogyny and sexism surrounding this entire issue – but unfortunately, I have no solutions for that. If you have any ideas, I’d love to hear them in the comments!

6 thoughts on “The Gender Pay Gap”