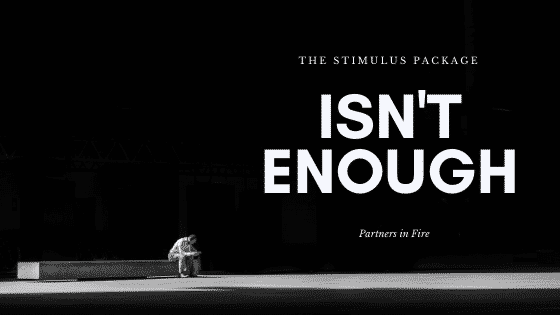 I don’t fully understand what’s in the bill for businesses, so I’m not even going to try to say that the stimulus package isn’t enough for businesses. From what I understand, the majority of that two trillion is going to businesses, and normal people are getting the shaft (yet again). But hey, I might be wrong. It may be enough for big businesses and not small, or it may just suck for everyone.

You’re absolutely correct. I’m arguing that a one-time payment of $1200 isn’t enough. Does that even cover the rent in most places? Actually, the answer is no. When I was doing my research for my post on how much life costs, I found that the average rent in the US is over $1400 a month. The stimulus check isn’t even enough to cover one month’s rent for most people.

The only saving grace of the stimulus package is that it includes money for dependents. Parents get an extra $500 per child, which will at least help them feed their children (if the money doesn’t all have to go to rent).

The Added Unemployment Protections are a Joke

When I first read about the stimulus package, I saw the added unemployment benefits, and I thought that maybe, for once, the government was doing something positive for the people affected the most. For the first time in history, unemployment would be expanded to cover people who worked the gig economy. Benefits were going to increase by $600 per week. $2400 a month might be enough to help most normal people. This, on to top of the $1200 one -time payment, might be enough to stave off financial ruin for millions of families.

But then I started reading the horror stories. Some states’ websites are crashing. Other states aren’t even letting people apply yet. People call into their state’s office and either get stuck on hold for infinity or disconnected. Others are applying and getting denied for unknown reasons. The benefits added to the unemployment program have been nothing but a joke so far.

Many people lost their jobs over two weeks ago, and still haven’t been able to even apply for these new benefits. In the meantime, rents are due, utilities are due, and kids have to eat. Which leads me to my next point.

The stimulus package is failing the American people because it isn’t timely enough. Most people needed that $1200 check around mid-March, when their businesses were shuttered. They needed it by April 1st, when their rents were due.

Due to our poverty trap, the poorest Americans are those least likely to have bank accounts. They will receive paper checks, which won’t even get mailed out until April 24. At least the IRS is prioritizing the checks by income. The poorest Americans will receive their checks first, but they probably won’t come until around May first, and by then, most people will be at least a month behind.

And It Uses the Wrong Metrics to Assess Need

I think it was a giant mistake to tie the stimulus checks to 2018 or 2019 income. I get that some people didn’t want high earners to get a check, and I can respect that. However, tying the stimulus to previous income completely screwed higher earners who lost their jobs due to the pandemic. There are tons of other people who are also being left out of the stimulus.

It’s true that the bill includes a contingency for high earners. The people in that scenario will get the money back when they file their 2020 taxes. Well, that doesn’t exactly help the people who need the money now, does it? Who thought getting these people some extra money a year from now was the ideal solution?

This is probably an unpopular opinion, but I don’t think the stimulus should have been means tested in any way. Means testing and arguing about who deserves a check is part of what slowed the whole process down in the first place. The government should have implemented it like a UBI – everyone gets one. That way no work needs to be done to figure out who “needs” one, and the process could’ve moved along a little faster. The people who don’t need it will still use it – they will pump it into their local economies or the stock market. That would be a win for everyone.

The stimulus package isn’t enough for the millions of people who lost their employee sponsored healthcare when they lost their jobs. If we learn one lesson from this pandemic, I hope it’s that we need a better system of healthcare. Having people lose their jobs and their health insurance in the middle of a pandemic is a national embarrassment.

The stimulus package did include language that testing for the virus would be free, but it does nothing to address the exorbitant cost of treatment for the most severe cases. For the uninsured, treatment costs can skyrocket to over thirty thousand dollars.

Even those with insurance will see hefty bills if they are hospitalized. According to research, patients with insurance can expect to see bills of at least $1300 – and in many cases it will be higher.

This is a fundamental failure of policy. People have been arguing for years that our health care system is subpar and needs to change, but nothing has been done. And my biggest fear is that nothing will be done after this is all over either. It will go back to status quo, and millions of people will die because being sick is a privilege that they just don’t have.

What Would Be Enough?

I’m not going to pretend to have all the answers. I don’t know what would be enough to address this situation. However, I do think a single payer health care system and a UBI would be great starts. If we already had these two programs in place, we wouldn’t be seeing the huge amounts of financial insecurity and ruin that we’re seeing today. People would feel taken care of. They’d know they could seek medical treatment if they needed it without breaking the bank. They’d have a little something to fall back on if they lost their jobs, and more options for quitting their jobs to keep themselves safe.

Would that be enough to get people through this pandemic? I don’t know. But it would be better than what we have.