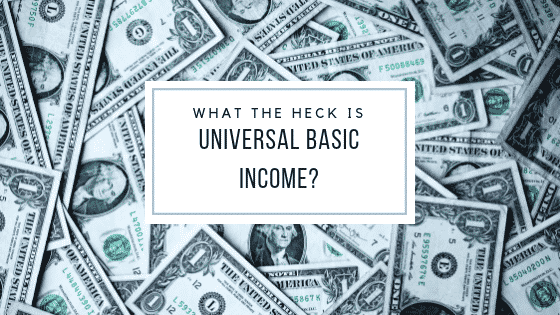 Have you heard of Universal Basic Income? It’s a fringe idea that’s been generating a lot of discussion lately. But what does it actually mean? And who supports such a radical idea?

What is Universal Basic Income

The essential concept of Universal Basic Income is pretty simple. The government pays all of its citizens a monthly stipend. This money can be spent on whatever the individual wants with no oversight. Program advocates debate whether minors should receive a stipend. Some argue that parents should receive a smaller amount for each minor child while others argue that minors shouldn’t receive anything. Ultimately this detail would be up to the government implementing the program.

Whether Universal Basic Income would replace or be in addition to the social programs that we already have is another huge topic of debate. Many argue that it should completely replace all of the social welfare programs that thousands of people rely upon. Why would people need food assistance, housing waivers, Medicaid, etc. if they are getting a guaranteed monthly stipend? Others argue that the stipend won’t always be enough to cover these essentials. They argue that we need to maintain some of these programs to ensure that no one is lives in poverty.

How would we pay for Universal Basic Income?

And here’s where the idea gets incredibly unpopular! The number one source of income for most government’s is taxes, so increased tax revenue is the most popular choice for funding the program. People on the high ends of the income scale would probably pay more than their stipend in taxes to support the program. No one wants to pay more in taxes.

Other ideas for funding the program have been discussed as well. These include raising corporate taxes while closing some of the loopholes in the corporate tax code or raising tariffs. The main arguments against these ideas is that corporations would pass the costs along to the consumer, and higher operating costs would stifle innovation and potentially cost jobs.

What are the arguments for and against Universal Basic Income?

There are tons of arguments both in favor of and against the program, and there is a lot of nuance in between. Therefore, I’m just going to lay out the basics.

Proponents of Universal Basic Income argue that wages are too low and jobs are too scarce for people to lift themselves out of poverty. The argument is that if people were able to cover their basic needs (food and shelter) they would be more productive and have the time to develop in demand skills. People would also be more innovative and creative if they weren’t trapped in soul-sucking jobs. This would mean that we would have more art and more people pursuing their passions. A final argument in favor of universal basic income is that people would have more power to decline unfair wages and working conditions. This would force businesses to pay fair wages in order to be competitive.

Opponents of the program argue that giving people free money will lead to a dependent society where nobody will actually want to work. Another aspect of this is that people would refuse to work menial jobs for minimum wage, so companies wouldn’t be able to find workers and would potentially be forced out of business, leading to less competition. Opponents also argue that it’s unfair for the people who do work to support those that do not. A major argument of this position is that it is way too expensive to pay every citizen something.  Those that work would be taxed an outrageous amount to support everyone else.

Related: What Are Family Values?

Some countries are actually toying with the idea of Universal Basic Income. Finland was the first country to do a trial run on the program. They selected 2000 unemployed Fins who then received a monthly stipend for two years. Although the final results of the study have not been published yet, initial reports from 2018 imply that the program wasn’t ambitious enough to work.

Hamilton, Ontario, is testing a program to determine if basic income is more effective at reducing poverty than existing social programs. Barcelona began testing their B-Mincome program in 2017. This program  provides a monthly stipend to residents in the poorest area of the city. Most of these pilots are still in progress, so it’s unclear what the final verdict will be.

There are actually a few big-name proponents of the program. Most notably are billionaire entrepreneurs such as Elon Musk, Mark Zuckerberg, and Richard Branson. In all fairness, it would be impossible to list all the people who don’t support it, because there are so many.

What are your thoughts on Universal Basic Income?

I’ve tried my best to not interject my opinion in this post (that’s for a different day!) but I’d love to know what your thoughts on the program are! Are you for or against it? And why?

4 thoughts on “What the Heck is Universal Basic Income?”