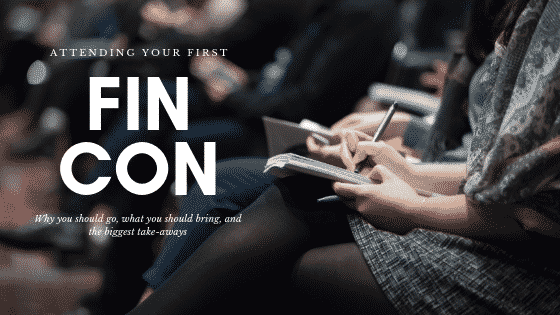 I just got home from my first ever Fincon! So of course, I had to write a post about all of my experiences there, so you can decide if attending a Fincon is right for you! Writing this post is like a rite of passage!

The First Day at Your First Fincon

If I could only use one word to describe how I felt when I walked into the main room on my first day at my first Fincon, it would be overwhelming. My first thought was to turn around and crawl right back into my hole. There were so many freaking people! I didn’t know anyone (not in real life anyway), so I had no idea where to even begin.

But, instead of doing that, I moseyed on over to the bloggers table, pretending that I knew what I was doing (fake it until you make it, right?), and luckily for me I ran into some people I knew from Twitter right away! Although we had never met in real life, we already had that connection and it made reaching out and talking to them so much easier.

Over the course of the conference, I’ve met tons of my Twitter friends in real life (I may have even fangirled over some of them…sorry!) and it’s been amazing. Getting to engage with the real person behind the Twitter account has been a wonderful experience, but I think the real advantage was not feeling so alone.

If you are considering going to Fincon (or any conference for that matter) get on Twitter and start engaging with the community. You’ll make some amazing online friends who will eventually become real life friends, and you won’t feel as alone and overwhelmed as a first timer. If you are just starting out on Twitter or struggling to make friends on the platform, check out my post on how I gained 500 followers in my first month on Twitter.

As a somewhat shy person, I don’t like to bother people or groups. I’m not generally the guy who will butt in and be like “hey can I join you guys?”.  I’m much more comfortable approaching someone who is alone and asking them if I can join, and I’ve found a lot of success in meeting new people that way.

One thing to remember with when attending a conference like this is that others are here to network as well, so maybe people that are alone are having the same struggles as you are. I’ve been incredibly successful in approaching people who were by themselves and striking up a good conversation. Apparently, there are tons of shy people who attend conferences, who would have thought?

After I got comfortable approaching individuals, I tried to step out of my comfort zone and approach larger groups. The great thing about a conference like this is that most people don’t actually know each other, so when you interrupt a group, you aren’t really interrupting an intimate “in group”. In general, I’ve found that if I’m polite and ask if I can join the group or the table, everyone is super nice and makes room for me. All it takes is asking.

Start small with networking – People you already have some type of connection with and people who are by themselves are the easiest ones to start with.

The Sessions at Fincon

The worst part about Fincon is that there are so many amazing sessions that it’s hard to pick which one to go to. And of course, some of the ones you are super interested in will be at the same time.  Sure, you can get the virtual pass and watch them all later, but let’s be real – I’m not going to do that. I prefer the live show any day.

The sessions are organized in tracks. They have a blogging track, a podcasters track, a journalist track, etc. But you don’t have to only go to the bloggers track if you are a blogger, it’s just organized that way to help people decide where they want to go. If you are a blogger but considering starting a Youtube channel, you are more than welcome to check out some of the session dedicated to Youtube.

The sessions I chose were based on my interests and my weaknesses. I went to a session on Linked-In because I’ve never used the platform in my life, and I was curious as to whether I should be using it (hint: yes, yes I should be). I also went to a few sessions on how to grow your blog, and a session on how to become a public speaker. There are also tons of sessions on financial topics such as student loans, investing, retirement planning, etc. You can find a session for whatever you are interested in.

Look at the schedule in advance and decide what sessions you want to go to. Get there a bit early, because they fill up fast!

I think my favorite portion of Fincon has been the community meetups. These are informal meetings organized by attendees, but outside of the Pro Networking pass, I think they provided the best opportunity for networking.

I went to two separate women in finance meetups, a singles meetup (I’m not single, but they welcomed everyone), a few FI specific meetups, and a backlinking meetup. These were great opportunities to network with people with similar interests, and find ways we can work together and build each other up.

I met tons of people that want to swap guest posts, do link shares, connect on social media, and really just help each other out. Not only that, but I’ve made new friends in the process. It’s not just about work and what someone can do for someone else, it’s about building a solid, lasting friendship and a community. And that’s important to me.

If you aren’t sure if you feel like you might not fit at a certain meetup-just go anyway! Everyone is super welcoming, you’ll meet some new friends, and it might even give you ideas you never considered before!

Everyone tries to upsell you, and Fincon is no different. When I bought my pass, it was super early so things were very cheap (for Fincon), and they asked if I wanted to upgrade to a pro networking pass for an extra hundred bucks or so (I honestly don’t remember how much it was). Having no idea what it was, I was like “sure, why not?” and I did.

Overall, I think it was a good investment. I got the opportunity to meet one on one with some brands that I’ve been using and get some cool hints and tips on how to write a blog post with affiliate links that will actually convert to sales. They also provided a delicious lunch, and the opportunity to sit with one of the brands and chat about everything during that time.

At the end of the day, there was a mixer, which allowed all Prop Networking Pass holders the opportunity to network with the brands we may have missed during the day. They served some delicious appetizers there and gave everyone a free drink ticket. All in all, it was worth it for just the food!

If you are going to get the Pro-Networking pass, start scheduling meetings as soon as possible. Slots fill up quickly!

Have you ever watched a movie where the main characters go to some swanky PR or networking party? I mean, that’s most movies because all main characters are publicists or journalists, right? But anyway, the kick off party reminded me of that, and it was fabulous. I had always wanted to go to a party like that in real life, and this was my chance!

There was an open bar, hors d’oeuvre stations, and all the networking you could possibly think of! I met people looking for freelancers and representatives form ad networks at this party, and since it was more of a relaxed atmosphere, it was much easier to talk and get to know each other as a person. Those real-life connections really do make a difference.

Unfortunately, I was exhausted after four days of meetups, parties, and networking, so I skipped the closing party. I’m sure it was just as fantastic though, and I definitely plan on attending next year!

Ok, so I’ve talked a ton about how amazing the different aspects of Fincon are, and that’s super important (and the reason you are going to go to your first Fincon, right?) but some logistics are also important.

I failed at planning this trip, so don’t be like me. I waited until a week before the conference to book a hotel room, and guess what? The rooms at the conference center were all sold out. Lame! I ended up booking a pretty reasonably priced room a half of a mile away, so that wasn’t too bad, but I would have been able to stay right at the conference had I booked earlier.

Another thing that I failed at is bringing stuff I’d need. Apparently, cough drops are like gold, because your throat gets super sore after all the talking and networking. Luckily, an awesome Fincon attendee gave me a bunch on the way to the opening party, so I was ready! You should also bring a notebook (I forgot a pen, but literally every company at the expo was giving them away for free), a sweater for when the rooms get cold, and business cards or something to give to brands.

I waited until the last minute to even consider business cards. Luckily I was able to design some on Canva and get them shipped the week before the conference. Lots of people say you don’t need business cards, but I felt like it was good to have them. I handed out a ton of my cards, and collected a ton of cards from others as well.

I saw other people with tons of cool swag. They had branded t-shirts, media kits, stickers, and tons of other cool stuff that I didn’t even consider. If you want to be like the cool kids, have some of this stuff ready for Fincon.

Should You go to Fincon?

After experiencing my first fincon, my answer is an unapologetic resounding absolutely!! I’ve come away with renewed motivation, fresh ideas for building my blog and my brand, and a ton of new friends. I have an idea of where I want to go with Partners in Fire moving forward, ideas for monetization, and new strategies for increasing readership. And, I had a great time doing it! I think I’m going to be a Fincon regular from now on!

17 thoughts on “Attending Your First Fincon”