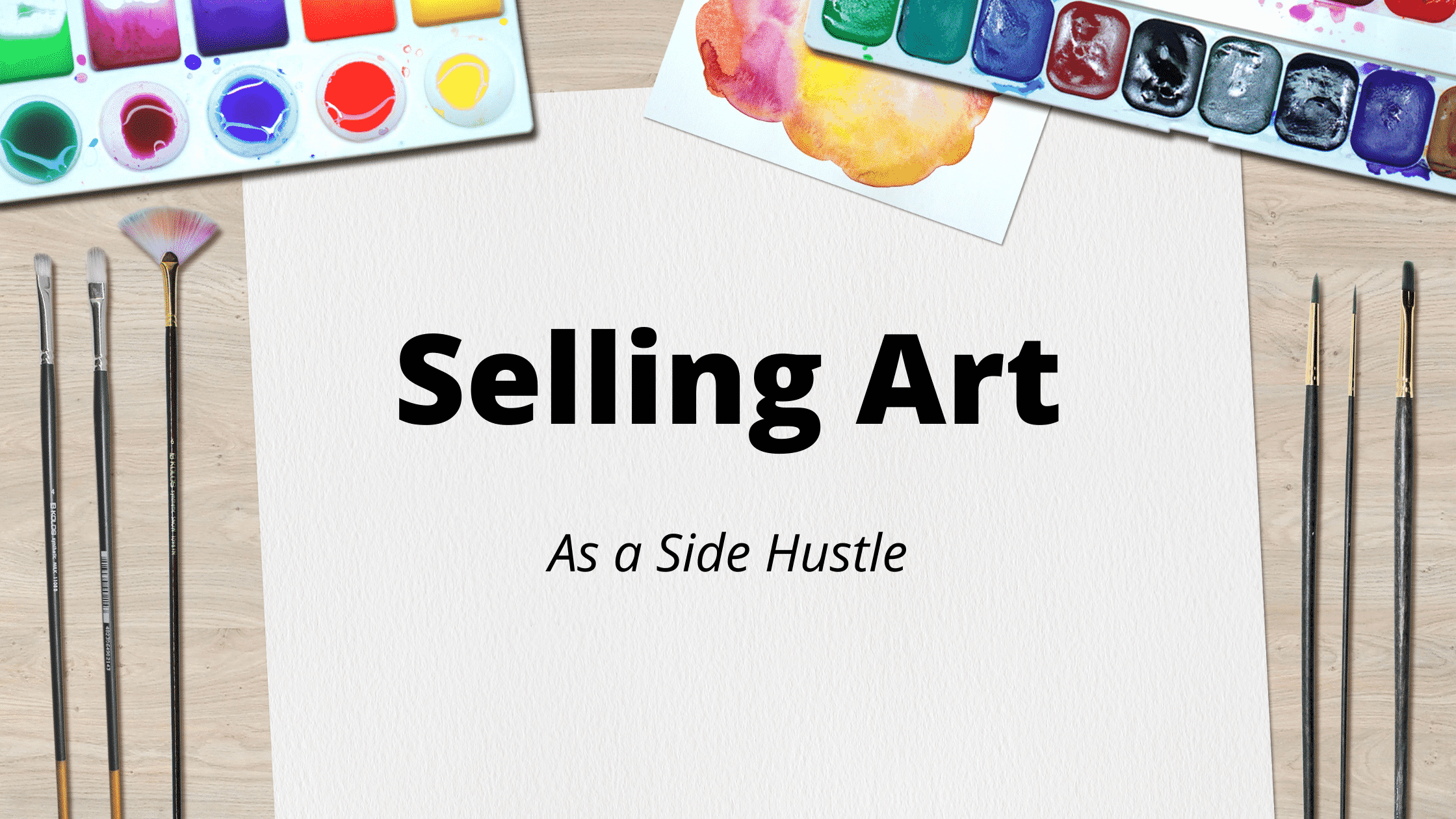 Let me paint you a little picture … no seriously, give me some money, and I will paint a picture of whatever you want. It’s hard to sell art as a side hustle, sometimes you have to beg for sales.

Selling Art as a Side Hustle

If you’re selling art to pay to learn how to create art in the first place, then that’s basically your business plan and sales pitch rolled into one bloody concussion of a learning curve. I’m going to be painting anyway, because I’m in love with it. But painting has never been a “Side Hustle” to me. Thinking of art as a side hustle is like creating ginormous fidget spinners to hang on the wall. From that perspective, a painter is just a terrible interior decorator that can only do one rectangular space at a time.

I mean, you’re not wrong about the pace. I can’t count the number of times I’ve said, “Just pay me for the cost of the materials, because really, all I want is to do another one.” If you want to know how to sell a lot of paintings, there’s your answer. I’ve sold hundreds of paintings since I started. But I’ve also painted 10 or 20 for every one that I sold. Every dollar of that and more has gone into the tools and time spent trying to get better, understand more deeply, see more clearly.

Juggling a Passion for Art with the Need for Money

I delved seriously into art over a decade ago, and now, if I’m being honest, there’s not a lot in this world I wouldn’t throw down a bottomless hole if it meant spending more time in front of the easel. Mostly, it tends to be money that goes in that hole, of course, but it’s actually a great way of finding out the many things you can do without. “Starving Artist” might be a cliche that gets thrown about, but poverty teaches some amazing lessons to artists. But not budgeting. It doesn’t teach that.

On the other hand, poverty brings other surprises.  I once agreed to do a series for a woman before discovering I was to be decorating her husband’s man-cave with paintings of scantily-clad ladies. Keep in mind this is at a time when people would hand me an old faded photo of their great-great whatever and ask me to paint her like Van Gogh’s Starry Night (now who belongs in an asylum?). Or give me 8 selfies, so that I could use this face, but the dress from this photo, with the background from this other photo, each with their own unique Instagram filter applied. Oh and also add the family pet. And I would try.

But What Kind of Art Really Sells?

Here’s the thing. The art that sells, especially at the amateur level, is a multi-headed ever-morphing trend-beast. Owls, Peacocks, Ginkgo Biloba leaves. This month it may be goldfish, who knows? Goldfish bedsheets, goldfish pendants, two-dimensional, multi-canvas, alcohol ink-poured, fish-shaped sponges filled with metallic paint, slinking across the Alaskan tundra. A month later, once everyone sees a few truly stellar goldfish swim out of a real artist’s studio space, everyone will look at their gaudy sponge paintings, realize not one of them matches the beauty of the real deal, and they’ll start trolling for a new spirit animal.

Here’s my opinion. Go buy a goldfish, a clear glass bowl, and set it on the windowsill beside your easel. If you need a side hustle, by all means, cut your old dish sponges into stereotypical fish shapes. But wouldn’t it be delightful if you learned to paint an actual goldfish? Just saying.

Now I’m thinking my title has become a bit misleading. What if I changed it to:

Become a Successful Artist in 45 Seconds!

Would people be more or less likely to click? The study would no doubt uncover something curious about the human psyche.

Okay, in all honesty, the whole reason for this post is that I don’t know the answer to the inherent question of How-to. How to turn your art into a side hustle.

I’ve always had this fairytale hope that if my work is good enough, it will sell itself. It’s kind of true. But will it sell itself for five grand a pop? This is the truth: I wouldn’t sell a painting for that, not at my level.

I’ve had this experience many times with paintings, but the first time happened in front of Relics of the Brave, a painting by Arthur Hacker. You can see the painting for yourself at the Telfair Academy in Savannah, GA. I managed to study it several times, and I swear, you can see those four figures breathing, as if four real people sat in a room just on the other side of the picture frame. The longer you stand there, the more convinced you become that what you see is not a painting, but an actual window to a moment frozen in time.

Okay, I got it. Let’s change the post title again.

How to Make Your Painted Figures Seem to Breathe

I think I can answer the question though. Let’s think. How did Arthur Hacker do it? I mean really, if you could time travel and be in the room as Hacker painted the piece, what would you see? Firstly, a dude with a lot of practice. Hacker painted this scene from life, over a period of time, observing the figures as they shifted, fidgeted, breathed. Hacker caught that rhythmic movement of their breathing forms simply by observing/painting them over time. And so, what you see is not a snapshot moment in time, but several hours tucked into a single image.

Painting from life gives you something that a camera’s image never can. Well, that’s not to say that photography isn’t its own artform, as well as a versatile tool. No one need be purist about creativity. Yet still, use captured images knowing them for their inherent flaw.

The camera is an attractive solution, especially when you believe you’re unable to measure the dimensions of what you see with your naked eye. So, you might not know this but, Once Upon A Time, there was no such thing as cameras. I know right? Un. Real. So, were those artist dudes that didn’t have cameras just like, super badasses or whatever?

The camera obscura effect has been known since Aristotle, sure, but skip past that and you realize there are not one but two camera obscuras wired directly into your brain. It takes a bit of believing in yourself, but eventually, with practice, you’ll realize you’re perfectly capable of measuring the shapes, colors, values, forms, and their visual relationships with a light source and each other, all of these things at once. And there’s more! Just kidding, that’s it. That is the secret you discover, after some experience drawing and painting from life, eventually you learn that you can trust what you see. And therefore know when you’ve successfully captured what it is you truly see before you. Ask yourself, is it that you can’t draw, or that you’re not really looking at what you’re trying to draw.

Well, now I’ve got to change the post title again.

Believe in Yourself for Better Art

Or something equally cheesy. I’m open to suggestions. What do we want to talk about next? Do I have to pick? Is this still the blog post, or just meaningless text fading too far below the surface of this Google Doc to be seen by anyone?