If you’ve spent any time on the internet, you probably know what a chat room is. These digital spaces allow people to anonymously send messages to others using a screen name. These chat rooms have been an integral part of the web since its inception.

However, as the internet becomes a bigger and more complex place, these chats have also created a demand for moderators to filter out inappropriate comments or behavior. Although this work is increasingly important as more individuals monetize their online presence, most of these moderators are still volunteers.

That’s why cousins Montana Wong and Kevin Boodtama recently took a leap of faith and turned their passion for streaming into a startup called Sprise.

Like many millennials, the cousins grew up playing popular role playing games (RPGs) such as World of Warcraft, Halo and more. With backgrounds in gaming and a knack for development and design, they both decided to leave their jobs and pursue careers in what Wong calls the “passion economy.” Now, established and upcoming streamers alike are signing up in droves to test their first product, Pally.gg, which is a reference to the common gamer phrase “good game.”

“We’re a product studio for creators,” Wong, 29, said. “We think this is a growing economy that really lacks the infrastructure to sustain it.”

One of the most popular sites for creators isTwitch, which allows users to livestream games, musical performances, charity events, chatting sessions with users, and more. Users can “sub” to streamers and chat with fellow watchers during the livestream.

Some of the most popular streamers, such as Ninja, who has over 16 million followers and 500 million accumulated views, need help answering questions, making sure closed captions are working, moderating chat for inappropriate comments, and a slew of other backend issues.

On Twitch, volunteers who help streamers with these tasks are called moderators, or “mods.” In fact, it’s not uncommon to see the hashtag “#PetTheMods” pop up on social media or in-stream chats as viewers and streamers express their appreciation for these volunteers.

“Mods do several things when it comes specifically to the streaming community,” Wong said. “They do things like moderate chat, they ban folks, time out folks, and mute folks for a certain period of time. They also help streamers do administrative work and more. They’re the first line of defense for streamers.”

Many streamers make money on Twitch through tips and donations that viewers give them. Streamers with larger audiences often not only make more money, but they need more mods to keep their streams running. However, Twitch doesn’t have a system in place that permits streamers to split donations or tips with mods.

Boodtama and Wong want to solve that problem. Six months ago, Boodtama said he was talking to Wong on the phone about wanting to make a career change. In 2016, Boodtama worked at a food delivery service startup called Zoomer. He worked remotely for the Philadelphia startup, as he lived in San Francisco. Zoomer was acquired by Grubhub in 2017, and he stayed on as a senior product designer at Grubhub.

At the time, I wanted to leave Grubhub,”  Boodtama, 29, said. “It was a wonderful learning experience, and I worked with a fast-paced, passionate team. I got to learn how to deal with bureaucracy and how to scale products.”

During a series of phone calls, Boodtama found out Wong was also looking for a change. Wong had previously founded a company called Sengage.io. He worked with over 30,000 creators and brands, including Cash App and 100Thieves, to help them grow their engagement and livestreams. Wong also worked as one of the founding software engineers for Amazon Managed Blockchain.

Despite their successes, the cousins were looking to work for themselves while helping content creators grow their businesses. It was perfect timing, Boodtama said. Boodtama and Wong’s complementary skills quickly morphed into a shared vision for a startup of their own, Sprise.

As the duo brainstormed what products they might build, they first came up with text.me. This early product would allow fans to pay for texts from their favorite content creators.

Sprise opened the product up for early access but soon found that the streamers they worked with all wanted different things out of the service. Without a unified vision for what text.me should become, the cousins decided to put it on the backburner.

“We both think it’s an interesting product,” Wong said. “The problem we ran into is there are so many ways to take it, and we couldn’t double-down on the correct streamers to carry it through. We got a nugget, a hint of a trail, but the mod issue felt more focused.”

Related: Do you have what it takes to be a Twitch moderator?

The “mod issue,” or how Sprise could provide a way for streamers to pay their mods, quickly morphed into Pally. Boodtama and Wong started on the idea for Pally around the same time as text.me – about six months ago.

Pally is a stand-alone product that Twitch streamers can link to in their live streaming chats so viewers can donate tips. Streamers can then split the tips between themselves and their mods, such as giving each mod 10% of the tips.

Pally’s name comes from a combination of the words “pal” and “paladin,” Boodtama said. In many RPGs, paladins are a class of players known as the protectors and champions of a team. To Boodtama, that accurately described the roles of mods to streamers, but he wanted a “softer” word to describe them.

“Maybe it’s part of my own bias, but there’s this air of seriousness with paladins,” Boodtama said. “Pally is softer. I ran it by some people, and they liked it. Mods are the champions of their team, and a pal is a friend. So we were pretty jazzed about the name.”

Soon after developing Pally, Wong found other streamers who were also passionate about paying their mods. While on a forum called reddit/r/twitch, he found a streamer named JanuaryAndO who started streaming three years ago post about his pay structure for mods.

JanuaryAndOn, who asked to be referred to by his streamer name, pays his mod Caladvor, or Cal, $50 per stream. Cal also receives $15 per hour to go through memes and other videos to ensure the content is appropriate for JanuaryAndOn to view live. Wong asked JanuaryAndOn if he wanted to be their first early access streamer, and he agreed.

“I have four, five moderators technically,” JanuaryAndOn said. “Only two take it seriously, like a job. The others are friends of mine. With Cal, he joined the channel months after I started. He was hyper-invested in how the channel operated. He was suggesting ideas for the channel and he was routinely there from start to finish.”

About two to three months after he started streaming, JanuaryAndO asked Cal to be a mod. His other full-time mod, Lighthawk, joined the mod team soon after, although they declined any payment JanuaryAndOn offered.

Nonetheless, JanuaryAndOn said he believes anyone who asks someone to be a mod should offer some payment or other form of compensation for their time.

“I hate working for free, and I’m sure anyone else does,” JanuaryAndOn said. “ I know for a lot of people, streaming doesn’t inherently come with income. But if you truly think you need mods and should go without paying your mods, do it for another channel to see if you want to do it for free.”

As Sprise accepts more streamer applications for early access, Wong and Boodtama said they are focused less on how many followers the applicants have and more on why they want to use Pally. Boodtama said he hopes this will help minimize a common tipping issue streamers have called “chargebacks.” A chargeback happens when someone leaves a fake tip either using faulty card information or by later requesting the money they tipped back.

For many streamers, chargebacks are hard to fight and can result in them not only losing the tip, but having to pay that tip and sometimes additional fees to PayPal or another service provider. By focusing heavily on building a positive culture around Pally, Sprise hopes to avoid this issue.

Boodtama and Wong hope the company grows large enough that Sprise can pay for any chargebacks that may happen, which is a model they’re testing for early access streamers. However, they’re also adding language to their terms of service to protect Sprise and the streamers from potentially having to pay for these chargebacks.

“Chargebacks can be a really expensive thing,” Boodtama  said. “We want to protect (streamers) and build that trust with our platform. Our whole brand is about caring for our community. We just put a small update in our terms of services saying tipping is voluntary — you don’t get refunds or chargebacks. That language is in there now, so we can bring that to our payment processors and we can file a dispute.” 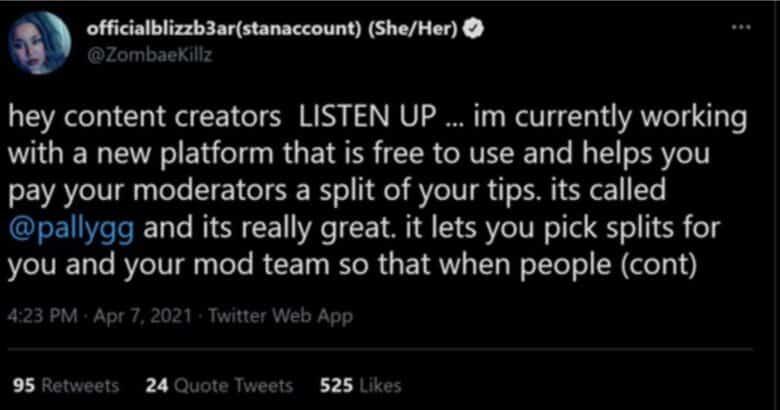 Wong and Boodtama said they aren’t sure when Pally will be available for the public. As of now, they are focusing on picking early access streamers who share Sprise’s mission of creating positive digital communities and paying mods for their work.

In just about two weeks, Pally reached about 100 early access users. Their application pool also increased tremendously after one of its more popular early access streamers,ZombaeKillz!, shared a tweet about Pally. The tweet, posted April 7, received replies from other prominent streamers, such as JasonSullivan and Jude.

“The tweet with ZombaeKillz exploded us,” he said. “We want to build a community around this brand. People have been looking for a service like this on Twitch for a while. So now it’s just a matter of trying to find people who are actively trying to find ways to give back and show appreciation to their mods.”

Like fellow early access user ZambaeKillz!, JanuaryAndOn said he has started telling other streamers about Pally. He said he was immediately drawn to Pally because it permitted him to continue splitting tips 80% to Cal and 20% to himself without disrupting the monthly flat payment Cal gets. However, he said he is concerned that the system may discourage streamers from continuing to pay their mods themselves.

“I don’t want this to become like the restaurant industry, where you give them pennies and your patrons are expected to give them tips,” JanuaryAndOn said. “But shout-out to Pally for creating a service that’s helpful for the behind the scenes of streaming. I think it  was a long time coming.”

The Sprise team hopes to capitalize on the recent attention Pally has received by expanding its early access base. Although COVID-19 restrictions are lifting across the U.S. as vaccinations become more readily available, both Wong and Boodtama believe demand for their product will remain steady or even grow.

“The year before COVID, we were seeing a rise of a couple new categories that were not gaming related,” Wong said. “Those were music and performing and just chatting. Those grew really fast and absolutely piqued during COVID. Even in a post-COVID world, I don’t see that as having a material impact on Twitch.”

Boodtama said he also thinks the pandemic has increased the general public’s appetite for streaming. Boodtama said he’s ready to help Pally grow to meet Twitch’s ever-evolving user base’s needs both during the pandemic and whatever the streaming landscape may look like after it.

“If you look at it, Twitch’s numbers exploded during the pandemic,” he said. “People who thought Twitch was for nerds or gamers are now on the platform. And games are cool again. If your introduction to Twitch or even YouTube was as a live streaming platform, I don’t think that’s going away. … I’m excited to see where the space grows.”

This article originally appeared on and was syndicated by MediaFeed.org.