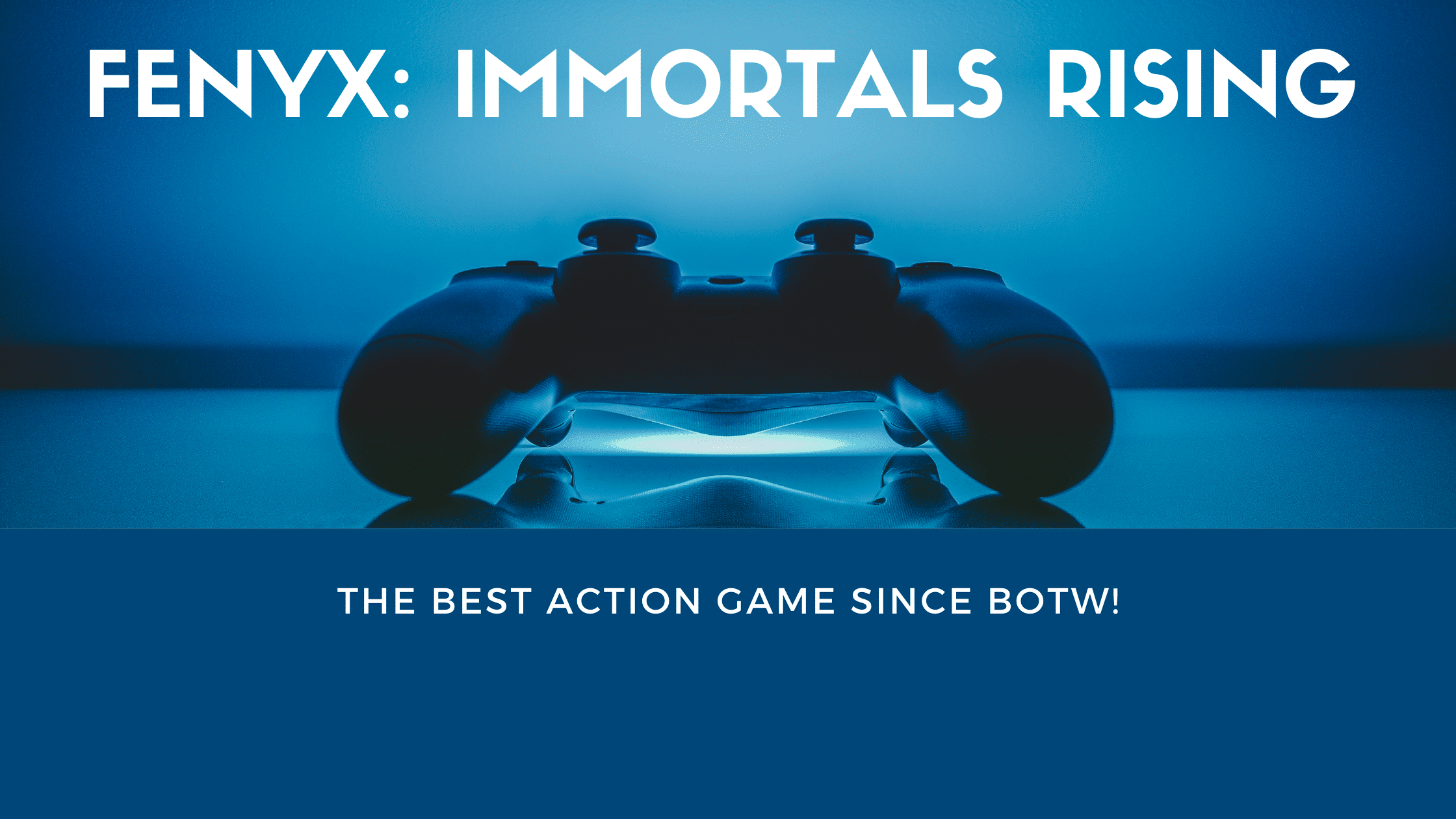 Are you having Breath of the Wild withdrawals? Do you need a new third person action/adventure style game to keep you occupied until the much-anticipated sequel comes out? Then you need Immortals Fenyx Rising.

This game is a blast and it has powerful BoTW vibes. Your character starts in a small portion of the map where she learns the main skills that she will need and earns her wings to “glide”. There are underground vaults to find, explore, and defeat which will help you learn extra abilities. And you can even set pins on the map from high up places so that you can find them later. The feel and style of the game is also incredibly similar to Breath of the Wild, so if you loved that game, this is definitely the game for you!

My favorite part or Immortals is the gameplay. It has fighting, puzzles, and vast expanses of map to explore. You can’t go very far without running into a bear or a boar that you need to slay before it kills you (Some bear attacks are insta-death when you are just starting out -that’s not fun).

I love action-adventure games that have many different elements to them. Button smashing hack & slash games are fun for a little while, but that gets stale. Puzzle games get frustrating when you can’t solve the puzzle. Immortals is a mix of both, and that works to keep players like myself engaged.

Another great thing about this game is that it’s fairly straight forward. There are only a few ingredients to collect – pomegranates for health, mushrooms for stamina, figs to increase your attack power, and nectar to improve your defenses.  This is much easier than collecting everything and having to experiment with various recipes, which admittedly, did get rather frustrating with Breath of the Wild.

There are other things to collect as well. Ambrosia will help you increase your maximum health (think heart pieces), adamantine will help you upgrade your weapons, coins will let you upgrade your skills and abilities, and amber gives you the ability to upgrade the power of your potions. There are a lot of things to collect, but it’s easy to figure out how to use each item.

I would be remiss if I didn’t mention how gorgeous this game is. There are breathtaking views from atop plateaus, crystal blue ponds, shimmering rivers and detailed ruins. The graphics in this game are astounding. The colors pop out and make you feel like you are really there with Fenyx traveling through countryside and exploring old temples.

One big difference between this game and BoTW is how the colors pop. The blues and pinks are over saturated which makes them stand out in the landscape, and gives the game a bit more of a fantastical aura. The colorations were more subdued in BoTW, giving it a more rustic feel.

Although I love playing this game, it’s not nearly as addictive as some other games that I’ve gotten sucked into (I’m looking at you Animal Crossing!). I actually count that as a good thing! It’s easy to find a good stopping point, it auto-saves often, and you can manually save at any time. These features make it easy to pick up and run around the world for awhile, but to stop when you have other things to do.

Immortals is more like an RPG than BoTW. As you gain experience points, you can use them to choose upgrades. You can decide whether you want to swim faster, climb higher, and gain a special attack or block ability. There aren’t as many options as you would find in a traditional RPG, but it’s a perfect balance for a more casual gamer.

You can also choose your character design. You can pick from quite a few male/female options. A cool thing is that you aren’t stuck with your choice if you don’t like it. After you beat the prologue, you have access to a makeover chair where you can change anything about your character’s physical appearance that you’d like.

A final aspect that is really cool about this game is that you can switch the difficulty levels. There are five different levels, ranging from story mode with very easy enemies; up to nightmare mode, which I would never even attempt. This option makes the game available for all levels of gamers, from the most casual among us (me!) to the highly experienced who want an epic challenge.

The best thing about this feature is that you can change it mid-game. If you start out on story mode but it’s too easy, you can switch. You just have to go to the “options” screen and change the difficulty setting. However, you do need to close the game out and restart it before the changes take effect, so make sure you save before switching!

Not everything about Immortals Fenyx rising is perfection. The character movement seems a little wonkier than some other similar games. Sometimes she gets stuck and won’t finish climbing, and sometimes she won’t jump correctly. I’ve had to push the “collect” button a few times sometimes to get her to collect the items, and she pauses briefly sometimes before completing an action.

I must admit, some of these might be “me” problems. I’ve always found game controls challenging, and it does take me a long time to learn new games and new controllers. This is part of the reason why I tend to stick to easier games. But I picked up BoTW fairly quickly, and didn’t have nearly as many problems with Link getting stuck as I do with Fenyx getting stuck.

The other thing about this game that drives me crazy is the difficulty of enemies. I know, I know – games are supposed to be challenging. But when you are just starting out, it’s hard to gage which enemies you can defeat and which will kill you quickly. It gets frustrating to start a battle and get killed immediately over and over again. There are quite a few places where I’ve given up the fight and decided to go back after I get some juicy upgrades. You have to grind a lot to find the right armor and get enough adamantine to upgrade it though.

My final complaint about the game is the stamina. Fenyx runs out of stamina incredibly fast, and when you are just starting out one mushroom only refills a paltry amount. It’s a gamble as to whether you will make it to the top of that cliff you’re trying to climb!

Most cliffs, especially early on, have lots of resting points and mushrooms for you to collect along the way, but that doesn’t make it any less irritating.

Even with the wonky controls and difficulty early on in the game, Immortals is worth your time. It’s a fun game with a lot to explore. And if the beginning is too hard, you can always switch the difficulty level. My comments come from playing the game on normal mode, and I’m sure I’d be able to defeat my foes easily if I switched it to story mode. This game would also make a great gift for any gamer!

Will Immortals Fenyx Rising be Free?

No. There was a limited time demo (which some folks might still be able to find) but in order to play the full game, you will need to purchase it.

Will Immortals Fenyx Rising be Multi-Player?

No. This is a single-player game.

Will Immortals Fenyx Rising be on PC?

This game is available on every platform: PC, Nintendo Switch, PS5, and Xbox.

Will Immortals Fenyx Rising be on Gamepass?

Not for free. People with a Gamepass subscription can purchase and download the game through Xbox, but it’s not part of the Gamepass offerings.

If you still aren’t sure whether you want to jump in and get this game, check out the video of my first time playing on Youtube. This shows the prologue and the start of the story, but there are no spoilers for any important in-game plotlines. Check it out and then decide!

1 thought on “Immortals Fenyx Rising: The Best Game Since BoTW”