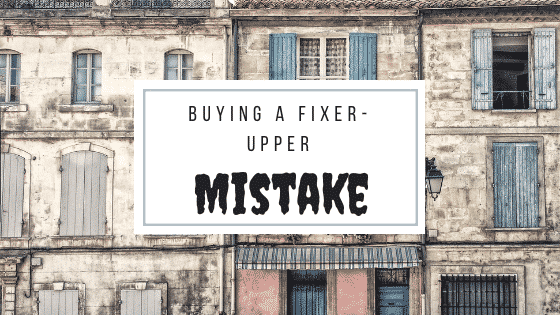 What is a Fixer Upper Home?

As most of us know from the HGTV series starring Chip and Johanna Gaines, a fixer upper is a house that’s cheap because it needs work. The sellers list it below market value for the area, because it’s going to cost the buyers to fix it.

However, fixer upper is an incredibly generic term. The homes that might be considered fixer uppers can vary from needing complete remodels, to just having some cosmetic damage. That’s a huge range, so if you’re considering buying a fixer upper, you definitely need to do your research.

Is it Worth it to Buy a Fixer Upper?

I thought it was. I went it all wide eyed and bushy tailed, thinking that renovating a house would be an amazingly fun challenge. It is a challenge alright. Fun though…

But financially? I do think it’s worth it – if you buy the right house. Even though I suck at renovating, I think I did a great job buying. My current house is incredibly dated, but it’s livable. I can cook, shower, sleep, be warm, be cool, and do everything else that anyone needs to do in a home. I’ve been slowly working on updating and remodeling, and by the time I’m done I’m sure I’ll get more out of it than I paid for it.

However, fixer uppers can be even bigger mistakes. You don’t ever really know what’s wrong with a house. I had my share of issues with this place – the sewage line backing up, the heat breaking, the awful issues of the bathroom. I knew it was a fixer when I bought it – but I didn’t realize how extensive the fixing was going to be.

Can I Get a Home Loan for A Fixer Upper?

One thing to consider when deciding on a fixer upper is your loan options. Most traditional loans won’t allow you to include the renovation costs in the mortgage – but there are some specialty products that are specifically designed for it. Like anything, there may be additional fees involved.

Some lenders won’t even finance a mortgage for a traditional loan if the home doesn’t meet appraisal requirements. VA loans are very strict about what can and can’t be wrong with a home prior to funding. Be sure to do your research if you plan on financing a fixer upper, so you know what your options are.

My biggest mistake in buying a fixer upper was thinking that I could DIY most of the issues. New flooring? I can install that on my own. Bathroom issues? I can totally install new plumbing. As it turns out, I can neither install flooring nor fix the plumbing.

My eyes were bigger than my stomach when it comes to fixing a house. I can throw paint on a wall. Apparently, that’s all I can do. Like I said, I can’t fix plumbing, or install flooring, or fix a sewer clog, or do any of the hundreds of little things that this house needs done.

I first realized that I was in too deep when I was replacing the living room floor. When I bought the home, the main floor was covered in stained carpet that smelled like dog pee. Gross, I know. But, I figured I could pull out the carpet and replace it with fashionable fake hard wood. How hard could installing flooring be?

Pretty freaking hard, actually. As I sat on the floor trying to figure out what direction the next plank needed to go in, and realizing how many pieces I had to cut to fit all the nooks and crannies, I had a realization: I can’t do this.

So, I paid a contractor to finish the floor and proceeded to ignore everything else that needed fixing up for about a year. Then I decided to start on the bathroom.

You all know how that turned out.

The Next Few Projects

The next few projects should be easier. I’m going to repaint and re-carpet the entire upstairs. I already know that I can paint, so that shouldn’t be a problem, and carpeting is cheap to install if I can’t figure it out.

After that’s done, I’ll start working on the kitchen remodel. I already know that I won’t be able to do that myself, so this year I’m starting a kitchen remodel savings fund. By this time next year, I should have enough cash saved to pay for the majority of the remodel. We will find ways to save money on it, such as doing the demo ourselves, keeping our appliances, and choosing cheaper options for counters and flooring (this is a poor area anyway – the fancy fixtures won’t increase the sale price by enough to make them worthwhile).

How to Avoid a Fixer Upper Mistake

I’m not saying to not buy a fixer upper. There are still great deals to be had on homes out there! Fixer uppers are awesome choices for a ton of people. Here’s how you avoid making your own fixer uppers mistake.

My biggest mistake was thinking I could just figure out how to do stuff. I’ve never been very mechanically inclined. I sucked at cutting those stupid construction paper snowflakes way back in kindergarten. All the other kids had fancy paper ornaments resembling snowflakes, while I had a crumpled piece of paper with random cuts in it. If I can’t even use scissors right, what made me think I could use a cut saw? Over confidence was definitely my biggest weakness.

My second big mistake was not budgeting enough money to fix all the things. Sure, I had enough to buy all the supplies I needed for the surface projects – but that’s never enough. I didn’t expect the unexpected, and ended up digging myself into a pretty deep credit hole.  And I had the audacity to be surprised when something broke. Hello! It’s a fixer upper! Of course stuff is going to break!

Prepare yourself for that eventuality. Make sure you have money in the budget for unexpected repairs and for things costing more than you expected. Trust me – it’s going to happen.

Another way to avoid a fixer upper mistake is to do your research before buying. Hire a few home inspectors, and make sure you fully understand everything they say is wrong with it. Get second and third opinions if need be.

My home inspector missed a few serious issues with the bathroom. I knew it was dated, but didn’t know that the bathtub was cracked. That’s something a good inspector should be able to figure out. Unfortunately, it’s hard to know who is a good inspector and who isn’t, especially when you are new to an area. Relators will often recommend their friends and business partners.  It’s fine to use someone your agent recommends, but you can also check Angie’s list and Yelp for highly rated inspectors.

Buying a fixer upper doesn’t have to be a mistake. Although I’m in over my head, I’m glad I did it. I have a completely functional house mortgage free.  I’m slowly but surely fixing the biggest problems – all but guaranteeing that I’ll make money when I sell in a year or so.

And also – I’m living my dream. How many of us fantasized about buying an old house and renovating it? It’s glamorized so much in movies and media, I bet a ton of people wish they could experience it. I did – it was one of my life goals! Now that I’ve actually done it, I can mark that bad boy off my bucket list and never have to try it again. Part of life is learning what you don’t actually like to, isn’t it?

So if one of your life goals is to buy and renovate a fixer upper – go for. Just know going in that it isn’t as glamorous as it seems.