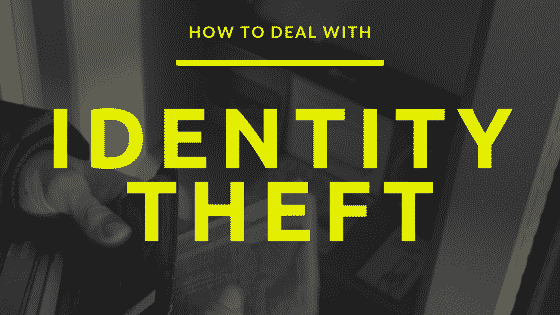 Identity theft is a real threat. We receive phone calls and emails everyday from people just phishing for our information. And, even if we can easily identify those spam calls, we can’t always trust companies to safeguard our information. It seems like a new company gets hacked every week! With all the advances in technology and so much of our information available online, it’s getting harder and harder to protect ourselves from those trying to hack into our accounts. Here’s how to deal with identity theft if it happens to you.

How to Deal with Identity Theft

What is Identity Theft?

Identity theft isn’t really about having your identity stolen. I think there was a movie at some point where a woman tries to kill her friend and take over her entire life. Nowadays, identity theft isn’t that sinister, but it’s still a big problem. Identify theft is when someone steals your personal information, such as your social security number, bank account information, or any other personal information in order to open lines of credit or access your accounts. It applies to a broad swath of crimes in that arena, from opening a single new credit card in your name to wiping out entire bank accounts.

There’s a common misconception that strangers are the sole perpetrators of identity theft crimes. But it can hit close to home as well. I’ve seen far too many Reddit threads and finance advice columns about parents opening credit cards in their children’s names to have any faith that it’s a rare occurrence. The victims of this type of identity theft often don’t consider it to be as serious of a crime as it is. Regardless of who’s doing it, identity theft is a problem.

I’ve had my identity stolen three times. Luckily, I didn’t have to deal with the added trauma of the perpetrator being someone I know. But either way, it sucks to find out that someone has been destroying your credit (other than you!).

Two of the three times were pretty simple. Someone had gotten some of my information and opened a credit card in my name. One was a Paypal credit card, and they were having a field day driving through the Western US, taking cash advances at every ATM along the way. I don’t remember what type of card the other was, but they tried to do some shopping at Walmart and got rejected. All I had to do in these situations was call the card companies and dispute the charges. The cards were both canceled pretty much immediately, and I wasn’t held responsible for any of those charges.

My First (and Worst!) Experience with Identity Theft

My first experience with identity theft wasn’t as simple. I had just stepped off the plane into London, ready for my first ever international excursion. I was going to stay with a friend there for a few days, then head off on my own to Paris and Rome. But first, I wanted to get a nice coffee drink at the airport café. I had saved up for this trip, and I had tons of money in my bank account to pay for whatever my heart desired. So imagine my surprise when my bank card was declined at the café for lack of funds.

That couldn’t be right! I got the international number for my bank and called right away. Apparently, my account had been overdrawn. Someone wiped out all the money I had stashed away in my checking account and then some. I had to deal with identity theft on the first day of my first real vacation!

Luckily, Bank of America was incredibly understanding about the identity theft and my situation. They locked my account right away and even offered a loan for my two-week vacation (I didn’t need it, because I had another checking account at a different bank that was untouched). They put alerts on all my accounts, took away the overdraft fee, and said we could sort the rest out when I returned from my vacation.

I enjoyed my trip and called Bank of America as soon as I got home. It only took them a few days to refund all the stolen money, and they helped me add additional security to my account.

What Should You Do if You’re a Victim of Identity Theft?

The one redeeming factor of identity theft is that most banks and credit card companies are insured against it, so as long as you follow the right steps in a timely fashion, you should get your money back.

The first thing that you should do to deal with identity theft is call and cancel your cards. Make sure you tell the company that there are unauthorized charges on your account. It’s imperative that you do this as soon as you learn of your identity theft. If you wait too long to report it, you can be held liable for the charges.

Next, you should set up a fraud alert on your credit report. You may think they only got one of your accounts, but you can never be too careful. More of your information may have been stolen, and having a fraud alert set up forces creditors to contact you before opening new lines of credit. This will prevent anyone who may have nefariously gotten your information from opening credit cards in your name.

It’s also a good idea to freeze your credit while setting up a fraud alert. Unfortunately, you have to do this with all three agencies rather than just with one, but if you don’t need to apply for new credit any time soon, it’s definitely helpful. No one will be able to open anything in your name with a freeze on your credit report. Determining the Extent of the Damage

After you’ve prevented any further damage from occurring, you need to determine the extent of what was done. A great way to do this is by getting a copy of your credit report. Scour that thing for any new or suspicious accounts. Make sure that everything on there is legitimate. Now is the time to report any errors to the credit agencies, and start the process of getting them removed.

A final thing you should do to deal with identity theft is report it to the authorities. Having a police report will help if any of your banks question your account. It’s also a first step towards catching the person who did it (though crimes of identity theft are notoriously difficult to track down and prosecute).

You may also want to report the theft to the FTC. All you have to do is fill out an online form. This acts as proof of your identity theft, and it’s good to have for when you file a police report.

How Long Does it Take to Recover from Identity Theft?

The length of recovery from dealing with identity theft depends on how much of your identity got stolen. If they only got to one credit card, it shouldn’t take more than a day to get that card frozen, a week to get the charges reversed, and two weeks to get a new card.

If they got more information, it can take longer. It took me about two weeks to get all of my money back from Bank of America, and they were incredibly supportive. It was helpful that I caught it and reported it immediately. Although it sucked, it was probably better that they wiped my entire account out, rather than just made small incremental purchases. It might have taken me a long time to discover the fraud if they had done that.

Protect Yourself From Identity Theft

Although your information can still get stolen with the best protections in place, it’s always smart to do what you can to protect yourself from identity theft.

Follow the best practices to prevent identity theft, and use a service like Lifelock to keep tabs on your credit report and warn you immediately if anything fishy comes up.