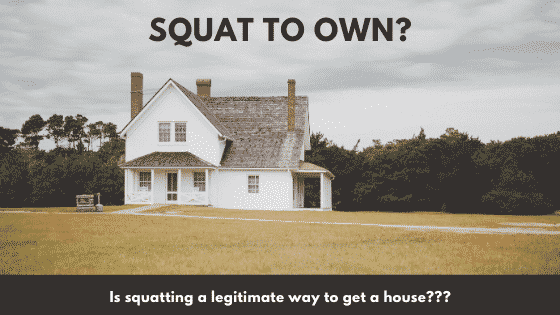 Think home ownership is out of reach? Well, think again! I’ve discovered an amazing method of obtaining the perfect home, and all it takes is a little squatting! Read on to find out more about squatting your way to home ownership!

Is Squatting Your Way to Home Ownership for Real?

I’m a homeowner – in fact I own two houses. And no, I didn’t squat to get either. I didn’t even know it was a thing until a few months ago, when it came up in conversation with some of my colleagues. My first thought was “you can get a free house??”

But of course, logic kicked in, and then I started thinking about the legality and morality of it, and how difficult it would actually be to achieve if it were indeed legal. So, let’s see what I found out!

What is the Law on Squatting?

The first thing I had to know about squatting my way to home ownership is whether it was in any way legal. I mean, there’s no way you can just go live in an empty house and claim it as your own, is there? This isn’t the wild west!

My research into the legality of squatting your way to home ownership brought me to the laws on Adverse Possession. That’s basically the legal term for squatting. The laws vary by state, some actually do allow you to take ownership after a few years of squatting (legally speaking – and there are other requirements as well) while others are far stricter.

What are the Legal Requirements for Adverse Possession?

Like I said above, the laws vary quite drastically by state. If you really really want to try to get a home through squatting (though I don’t advise it!) check out your state’s laws. For the purpose of this post, and since I’m not trying to convince anyone to actually squat their way to home ownership, I’m just going to outline the general requirements.

In most states, in order to win a claim of adverse possession, your possession of the property in question has to be actual, open and notorious, exclusive and continuous, and hostile. That’s great, but what does that all mean?

In order to stake a claim of adverse possession, you have to occupy the property exclusively. You can’t share the occupation with anyone, including the current owners. In addition, you have to posses it continuously for however the law in your state says it takes to gain property rights through adverse possession. You can’t leave for three years and then come back to it.

These laws of adverse possession actual come from a place of logic. Most states apply these laws to disputes over property deeds. Sometimes a fence or a portion of a driveway is built on neighboring property, and over the years it can be argued that since the original owner didn’t seem to care, the portion in question should remain with the builder. This can also happen when property lines are drawn incorrectly and with other recording errors.

Has Anyone Actually Gained Property through Squatting?

I’ve heard stories of squatters gaining property rights in abandoned cities like Detroit, but it’s been difficult to find reputable sources that verify any of these claims. I did find a great article by Bankrate that described one squatter who actually won (along with 4 others who failed) which I thought was interesting.

The ones that failed tried to take over property that was actually wanted by the real owners (the story of the squatters trying to take the Veteran’s house while he was deployed just made me angry!).

The one person who won his adverse possession claim took ownership of a dilapidated apartment that was owned and ignored by the city, and spent 12 years fixing it up. Once the apartment was livable (and sellable), the city decided they wanted it back.  It seems like cases like this are the reason that the adverse possession laws exist in the first place – if someone makes a property noticeable better over the course of many years without argument from the real owner, they can legally gain ownership of it.

Can Squatters Take Over Your House?

Though I didn’t find lots of stories where squatters won their cases for adverse possession, I did find tons of examples of where they tried.  Usually, someone will move into a vacant home, do some repairs, and then claim squatter’s rights or adverse possession. 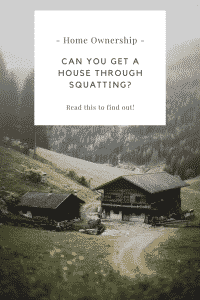 Unfortunately for them, they don’t always understand the law. You can’t just stay in a home for a few months and claim it as yours. Most states require at least 7 years in order to make an adverse possession claim.

What the squatters can get, however, is tenant’s rights. This is the thing that often makes it difficult to evict them. The laws on tenant’s rights also vary by state, but in general, if you can prove that you lived in a place for over thirty days, you can claim tenancy and the landlord will have to go through a lengthy eviction process to get you out.

This is what happened with the majority of the stories from the Bankrate article. The people moved in, stayed for more than thirty days, then forced the real owner to evict them. It generally costs the true owner thousands of dollars in legal fees, which, even if they win the case (which they usually do), they aren’t going to get back.

Although the legality of squatting in a vacant property that the owner wants back is a grey area at best, the morality, at least in my opinion, is pretty cut and dry. It’s not right to move into someone’s property and force them to force you out.

How Long Can You Squat in a House Until it’s Yours?

The length of time you need to be squatting in a house until the law gets vague and might let you have it varies by state. In some states, you can get it in as little as 3 years – but in others it’s closer to 30 years. That’s a huge variation, and even three years is a long time to illegally trespass on a property without getting evicted by the lawful owners.

Final Thoughts on Squatting Your Way to Home Ownership

Although squatting your way to home ownership is technically legal, its clearly not a method of achieving home ownership that I would recommend. If your heart is set on doing it, my only thought is to find a property that’s vacant and dilapidated that no one actually wants. And if the real owners do come for it before you meet the legal requirements for adverse possession, move out without a fuss. Don’t make someone take you to court to get their land back. Don’t be that guy.