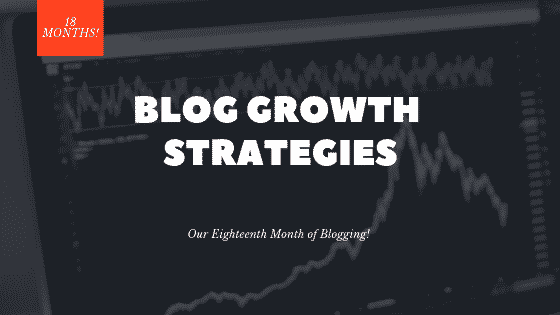 Our readership is growing slowly but surely. We only saw a growth of 100 users, but it’s something. There were a few rough days this month – we had our first day with under 30 users in quite some time. I guess people actually want to go out and do things on Saturdays when the weather is nice, rather than stay in and read blogs. Weird. Despite that, we are still averaging about fifty users a day. That’s the same as last month, but at least it’s consistent.

Social Media was still the top driver of traffic to Partners in Fire during our eighteenth month. Pinterest was the clear winner yet again (seriously, you need to get Tailwind!), but Twitter and Facebook are still bringing in consistent traffic.  In total, we had 954 visitors from social media this month.

Pinterest continues its reign as the number one social media network for traffic. The biggest traffic drivers are the same as they have been for the past few months – Adult Conversations and Becoming a Twitch Affiliate. My newer pin on the Spirit of the Financial Independence Movement also generated some traffic, and tons of pins got at least a click or two. Tailwind has been such a great help in getting my content shared on a regular basis. I love it, and if you aren’t using it yet you can use my code to get one month free!

Overall, we had 613 users coming to the site from Pinterest, which is exactly the same as last month. That’s a bit odd, but I’m glad there wasn’t a decrease. All social media traffic ebbs and flows, it’s to be expected. I’m still working on increasing my reach on Pinterest, but I’m happy with where we are right now.

Twitter was my second biggest social media platform this month. We had 294 users visit Partners in Fire from Twitter this month, which is a huge increase from last month. Most of those users were from the last few days, after my terrible break-up. I really appreciate all my Twitter friends banding around me and showing support.

Most of the Twitter clicks were to my post on what to do when your partner isn’t on board with a no spend challenge. I think most of my Twitter friends thought that was the break-up post, because I had shared I earlier in the day. Sadly, it was not. It was an upbeat article about us getting back on the same page.  I do think this whole experience shows how much people are drawn to a heartbreaking, human story. I think it’s important to share aspects of your real life, and be relatable to your audience. People thrive on personal stories. It’s the personal side of personal finance.

Facebook was my third biggest driver of traffic from social media this month, and it wasn’t a huge source. We had 47 users from Facebook this month, which is less than the two previous months. I failed to post anything other than my blog posts to Facebook for most of the month, which is probably part of why I lost engagement. I didn’t share many of my posts on my personal page either, which was also a big reason for the lack of users from the platform.

I think one of the main reasons we saw a decrease is the time of year. Saturdays tend to be my worst days for organic search, while Mondays are the best. It seems like people are going out and enjoying their weekends, but searching for financial independence topics when they get back to work. That actually makes a ton of sense!

Another reason why my organic search may have decreased this month is that I stopped updating posts. During my seventeenth month, I updated an old post every week. During my eighteenth month, I completely slacked on that. I only updated one post.  Clearly google likes it when old content is updated. I will definitely make updating my old posts a priority.

A final reason why my traffic via organic search decreased is that I didn’t do anything to increase my page speed. I didn’t delete any plug ins, and I didn’t even really check on the speed. These are important things that need to be done in order to ensure that the website works for SEO.

We had 352 users come to our website via direct hit during our eighteenth month, a small decrease from last month.  Getting those subscribers is really paying off! If you aren’t subscribed yet, what are you waiting for? Sign up today!

We published some amazing content this month. The most personal post I wrote this month was He Doesn’t Love Me Anymore, which was about my break-up. It’s been a rough week since then, but I’m trying to adjust and move forward. It would be nice if I could stop having rough weeks though. I was just getting over my cat’s accident last month when I got slammed with this. I guess it can’t get much worse.

On the day we broke up, I wrote a post on how we were trying to  compromise on my no spend year challenge. It’s difficult to know that I wrote it thinking we were getting back on the same page only to be broken up with later that night. That definitely wasn’t a good day.

I know it’s odd for a personal finance blogger to be writing about heartache and break-ups. Some people would say that I should stick to my niche if I ever want to monetize and be taken seriously as an influencer in the finance sphere. But, as I indicated in my favorite post of the month, Partners in Fire is about the Spirit of Financial Independence, and life is a big part of that. I don’t know what’s more real to life than breakups and heartache. Its part of the human experience, and that’s what Partners in Fire is about. The human experience as it relates to seeking financial independence. So, I’ll continue to write about my losses as well as my wins, my best financial advice and my biggest set-backs. Real life is messy.

I’m still struggling to monetize Partners in Fire, but it’s a work in progress. We did get some sales this month though, which is super exciting. Viglink and Amazon both drove sales this period – I made $17 with Amazon and a whopping ten cents with Viglink (gotta start somewhere, right?).

Support Partners in Fire by Shopping on Amazon

I also got more clicks with my Bluehost affiliates than I have in the past. Those clicks haven’t resulted in sales yet, but I’m hoping that they will eventually pay off. If my super honest blogging chronicles have motivated you to start blogging, start with Bluehost for as little as $3.99 per month!

We still have tons of room to grow, and we are going to get there. My main goals are to get over 2000 users per month, and to get more than 20 user per day via organic search. That means I’ll have to step up my SEO strategy! I’ll continue the strategy that I started last month, and Partners in Fire will continue to grow.