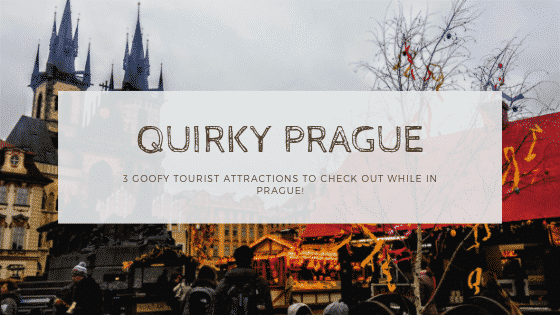 Prague is one the most amazing places I’ve ever been to. There’s so much to do and see in the city, from beautiful churches to old town squares. There are plenty of quirky and touristy things to do in Prague for explorers of all ages, and the city generally tops the list of places to visit in the Czech Republic.

What is Prague Famous For?

Before we get into my favorite Prague tourist attractions – the quirky, weird stuff that you probably won’t see on most lists, let’s talk about the few things you need to see while you’re in the city. There are a few tourist attractions in Prague that it’s known for, and these definitely need to be on your list when you go sightseeing in the city.

It’s nearly impossible to miss Charles Bridge if you are visiting Prague. It’s the famous bridge that crosses the Vltava River and connects the old town square to Prague Castle. To be fair, there are 18 bridges in Prague, but Charles Bridge is the most well-known and probably the most famous landmark in the city. It was built in the 14th century and was the only bridge crossing the river until the 1800s.

Although the bridge’s history is the main selling point, the views from the bridge can’t be understated. You definitely need to cross the bridge and catch a glimpse of the palace from the unobscured vantage point that the bridge offers.

Speaking of Prague Castle, you definitely can’t skip this on your visit to Prague. Built in the 9th century, it’s still the official seat of the president of the Czech Republic. Although it’s called Prague Castle and looks like a castle from afar, don’t expect it to be like the medieval castles you tour in Scotland. The castle is more like a medieval town center than a castle when you’re right there on the grounds. There are numerous structures and buildings, but it didn’t feel like one of those huge, drafty castles you imagine when you think about a castle. I think that is because many of the structures were built independently rather than all together as we would traditionally think.

Still, the complex is one of the largest castle complexes built in that time period, and it’s amazing that it’s still in excellent condition and still being used today.

One of the best ways to see the castle (and the rest of the city) is with a walking tour. Walking tours are extremely informative and one of the best ways to explore many central European cities. The guides are generally locals who love to show their city off to tourists. The best part is that you can explore all the tours Prague offers and book online before you go!

It’s not easy to miss the Prague astronomical clock. It’s located right in the old town square. This beautiful piece of artistry was built in the 1400s, and it’s the oldest astronomical clock that’s still operating.

But you have to make sure that you see the clock when a new hour comes. The figures come out, and “dance” to the rhythm of the clock ticks every hour. It’s a must-see when you visit Prague.

This is the cathedral with the two towers that stand out in almost any photograph you see of old town Prague. And the inside is just as stunning as the outside. It was built in the 1700s on the site of a previous St. Nicholas church, so the site has been considered holy for many centuries.

Underground tours are my favorite tours in any city. This is how you get to see the oldest structures and understand the way new things were built on top of old ones. Human ingenuity in regards to architecture and engineering knows no bounds.

When the city was founded and growing, it was a little lower in elevation than today and prone to flooding from the adjacent river. In the 19th century, when the new town Prague was being built, they dumped a lot of the dirt they excavated onto the old town to raise the level and prevent future flooding. Many of the original homes were turned into basements, and new structures were built right on top of the old.

Over time, many of the original structures were lost.  Some of the ruins are remarkably well-preserved, though, and the only way to see some of them is with the underground tour. You can get tour tickets before you even leave your house on Viator!

Now that we’ve got the main attractions out of the way let’s get to the fun stuff! One of the best things about traveling is seeing the weird and wonderous tourist attractions that other places offer. The US has our large lumberjack statues and giant balls of twine, but other countries have cool stuff too, and Prague is no exception.

Prague also has its share of funky statues and a few quirky tourist attractions that were absolutely fantastic. Some were fun, some were educational, and some were outdated and incredibly strange. I loved every second of it! Here are the three quirky tourist attractions in Prague that I visited, I hope you find them as ridiculous and fun as I did!

The Museum of Torture, located just off Old Town Square, was my favorite of Prague’s three quirky tourist attractions. This museum is located in the underground, a network of caverns underneath the modern-day city. Some of them date back to the 14th century! I do love visiting anything underground-related – remember how fascinating I found the Labyrinth underneath Budapest? But I digress.

The ambiance of the underground enhanced the eeriness of the museum, ensuring a macabre experience. The museum houses real artifacts of medieval torture, with posters describing how these items were actually used. It also had drawings and reconstructions which illustrated (sometimes in graphic detail) the implements being used on victims. This museum is not for the faint of heart. It’s terrifying to think that real people treated each other this way. It’s also good to know this history, though, so we don’t make the same mistakes.

The only downside to the museum was that it had a recording of a woman screaming on repeat. The horrible noise lost its spooky appeal after the second or third time and became more of an annoyance.

Museum of Ghosts and Legends

Prague is a very old city, and as such, has a plethora of myths and legends surrounding ghosts, monsters, and other supernatural creatures. Many locals will say that it is the most haunted city in the world! Given this rich history of things that go bump in the night, I had high hopes for the Museum of Ghosts and Legends, located across the Charles Bridge.

Unfortunately, I was a bit disappointed. This museum is incredibly outdated. The few interactive displays they did have were ancient and didn’t work properly anymore. I do love hokey, so I would have loved the old contraptions had they been operational! They had some figures and displays set up, but due to their age and upkeep, most of these were more sad than spooky. Most of the museum was dedicated to pages and posts of text. I enjoyed reading the legends, but it was time-consuming, and I was hoping for something a little more interactive and a little spookier. This museum was definitely the hokiest of the quirky tourist attractions in Prague that I had time to check out.

There are many other quirky tourist attractions that you can visit in Prague. Unfortunately, I didn’t have time to check out all of them. But if you are interested,  there is a mirror maze, a virtual reality ride, and even a second torture museum. I’d love to hear about your experiences with any of these attractions!

What Can You Not Miss in Prague?

Outside of the famous attractions and the quirky attractions, there’s one more thing in Prague that you shouldn’t miss, and that’s the old town atmosphere. There were merchants and blacksmiths, street food and mulled wine, and everything else you’d expect to find at a Renaissance Fair right there in the old town square. It was an amazing experience. Make sure you check it out when you visit Prague!

The Top Things to Do in Prague

For more things to do in Prague – check out Viator and all the tour options they provide!