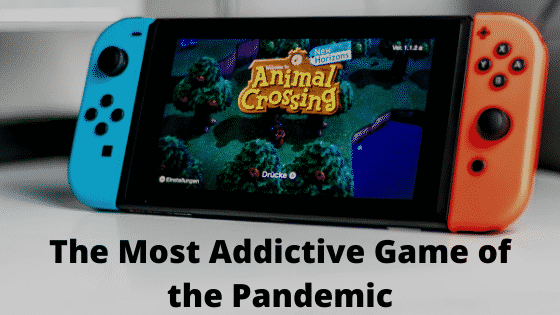 Unless you’ve been living under a rock, you’ve noticed that everyone is talking about the newest game for Nintendo Switch: Animal Crossing New Horizons. This game is freaking amazing – and most of my free time has been spent playing it. The only problem with the game is that you sit down to play it for 30 minutes, and suddenly it’s six hours later. How does that happen? Why is Animal Crossing so addictive?

What is Animal Crossing?

Animal Crossing is a series of games made by Nintendo. The newest addition, New Horizons, came out earlier this year. It’s your typical building game. Your character starts out on a fairly deserted island, and you have to build it up by collecting items, selling them, and convincing Non Player Characters (NPCs  – those characters that are controlled by the computer) to move to your island.

Once you have enough money and a nice enough island, you can start building bridges, ramps, and reforming the island landscape. You can also build extra rooms into your house.

What’s the Goal in Animal Crossing?

This is my first time ever playing Animal Crossing. My cousin has loved the series for the longest time – I remember way back in the long ago (god, it must have been 20 years ago!) I was hanging out with her while she was playing. I watched her wander around, talk to animals, collect random stuff, and I just didn’t get.

“What’s the point of this game” I asked.

“There is no point”, she replied.

And that holds true today. There’s no real goal or point of Animal Crossing. The game is what you make of it. You build stuff, or collect stuff, or design your island – you can do whatever you want. There aren’t any bad guys to defeat, or any quests you have to go on.  Your island is your blank slate, and you can do whatever you please while on it.

What’s so Great About Animal Crossing?

Those who have never played probably don’t understand why Animal Crossing is so addicting (and amazing!). My sister is one of those. She’s is trying to live off the grid, so she bought land in the middle of nowhere and is working to develop it. She’s building her own house, planting a garden, collecting rain water, and doing everything she can to live self-sufficiently. The poor thing has been in a group chat with me and our cousins, where our main topic of conversation has been Animal Crossing. Without a Switch, she hasn’t been able to appreciate the virtues of the game, and she finally got annoyed with our constant jabbering and asked us what’s so great about it.

Everything! Oh, you wanted me to be more specific, huh? I told her its awesome because we get to do all the things that she’s doing in real life, but without the work. All the reward and none of the effort. I’ve built a house, planted orchards, and even terra-formed my own little island! It’s such great fun, and I didn’t even have to leave my house (which is recommended, due to the pandemic).

But it’s also great because of all the tiny little details. There are so many small things, like the owl who tells you tidbits about fish and bugs you caught (which are real species and true tidbits) and the museum that displays everything you’ve donated. There’s the ability to design your own clothes, and offer those designs to the nook store for others to buy. And on top of that, there are near infinite possibilities for island design, home design, and items you can display. It’s a world where you can create almost anything, and that makes it spectacular.

Why is Animal Crossing so Addictive?

Maybe you’re thinking “ok, that does sound like fun, but what makes animal crossing so addicting?”.  In my unprofessional opinion, there are lots of reasons why fans are so enthusiastic about it that they forget to sleep.

First, lets talk about the easy, surface reasons. Sometimes I want to turn it off and go to bed. I’m ready. But, I need to snag one more fish to make my inventory full. And I just need to catch one more bug to get those extra bonus miles for the night. I should also sell everything at the store before I sign off, so I can start fresh tomorrow. But first, I need to head to the museum to make sure I don’t have anything new to donate. And after I sell everything, I should use the profits to pay off some of my loan, and make sure there aren’t any new recipes to buy for tomorrow. Can you see how just turning the game off turns into a half hour ordeal??

Related: Want to stream Animal Crossing? Find out how to get started and how to get affiliated on Twitch!

But honestly, I think it goes deeper than that. Animal Crossing is addictive because it’s an escape. It’s a break from our mundane lives. We get to go to the island and build our ideal homes, our ideal landscapes. We get to spend our time fishing and catching bugs, or doing basically whatever we want. It’s a financial independence lifestyle wrapped up in a video game!

It’s also an escape from the stressful situation we are all dealing with right now. We can’t go visit each other in person, but we can visit each other’s animal crossing islands. We don’t have the money to buy any of this cool stuff in real life, but it’s easy to collect bells and fill our animal crossing homes with junk we don’t need. In our real lives, we can’t escape to stress-free island living. Animal Crossing is addictive because it gives us that escape.

Should I Get It?

Do you want all of your free time to go into a video game? Maybe you do, or maybe you have enough willpower to prevent that from happening (I do! I only play a few hours a day!). But if you want an awesome, addictive escape from whatever is happening in the world right now, animal crossing is definitely the way to go. You can get your copy here! (You’ll also need a Switch if you don’t already have one)

What does this game have to do with Financial Independence?

I know, I know – you’ve all been dying to see how I relate this silly game to finance- and don’t worry – I did! Animal Crossing can teach us a ton about money! And don’t forget to check out the Youtube video!

5 thoughts on “Why is Animal Crossing So Addictive?! And Why You Need it!”