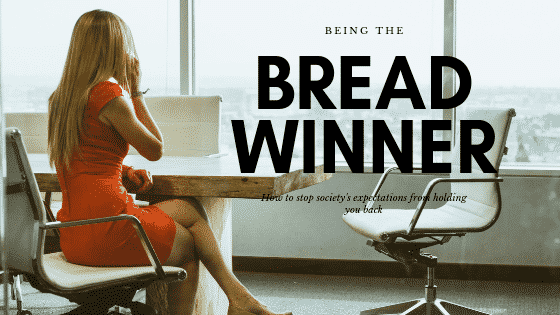 I was planning on writing a post about being the female breadwinner, but then my relationship ended so I’m not exactly a “female breadwinner” anymore. I wasn’t sure if I should still write it, but my Twitter friends convinced me to. Thanks Twitter! Although the relationship didn’t work out, I was still the high earner for the year that we were together. I was also the breadwinner in my previous relationship – but if you recall that was all kinds of terrible. Clearly, I have lots of experience with being a female breadwinner, and if that experience can help others, then it’s a post worth writing.

Being a Female Breadwinner

It’s sad that in our day and age, being the female breadwinner is still so controversial. A study came out just last year showing that both men and women downplay a woman’s contributions when she makes more. Why is that? Why are so many women ashamed of out-earning their husbands? Why are men intimidated by women who make more?

I think one of the biggest hurdles that female breadwinners face is societal expectations. I don’t like to judge people based on what they do for a living. If I’m attracted to a guy and think he is a good person I’ll give him a chance and date him regardless of how he makes his money – or how much he makes.

However, I’d be lying if I said I never felt a pang of guilt or shame when my friends and relatives ask me what he does for a living. I have. When I was dating someone who worked at Wal-mart, I was super ashamed to tell people where he worked. Here I am, making a great salary, and I’m settling for some loser who works at Walmart. I felt like people would judge me and our relationship. They would think “she could do better” or “what is she doing with him”, and as much as I hate to admit it, that affected me.

Identifying Why You Have Those Feelings

It’s incredibly difficult to not feel affected by these societal expectations – to not feel judged or ashamed. It’s ok to have feelings, and it’s ok to express those feelings. The difficult thing in this situation is to identify where those feelings come from. Are you truly ashamed of your partner, or is it something else?

I understood that I was only having those feelings because I was raised to believe that the man should show his commitment through his spending power. My dad’s favorite story to tell my sister and I was about one of my aunt’s first dates. The boy took her to a donut shop, and bought one donut for them to split. My aunt was appalled. She wasn’t going to split a donut with someone, she was worth a whole donut! When my dad would tell us this story, he’d emphasize that we are whole donut girls, and we should never settle for anything less.

When I was younger, I internalized the story and only thought of it in terms of income. He should have shown how much she meant to him by buying her a whole freaking donut! Now that I’m older, I understand that the donut was a metaphor for overall contributions to the relationship, not just the financial ones.  But even though I came to understand that on a logical level, it’s difficult to overcome the thoughts that have been ingrained since childhood.

With reflection and understanding, you can discover where your negative feelings about these types of things come from, and that will make it easier to dismiss those feelings – or act on them if you determine that’s what’s best for you.

Not Letting it Affect the Relationship

If you’ve identified that you want to dismiss those feelings, you have to ensure that they won’t negatively affect the relationship. That’s not always easy. Sometimes we lash out at the people who are closest to us when we are being negatively affected by our feelings. Remember why you decided to date that person in the first place, and consider the non-monetary contributions that they make to the relationship. Think about all the ways that your partner enhances your life.

The Wal-mart guy is a bad example, because that was a terrible relationship.  My last boyfriend is a much better example. He worked in the restaurant industry, which is renowned for low pay and long hours. His work was more difficult than mine by far, but he didn’t come close to making what I do. I wasn’t with him for what he made though. I was with him because he made me feel good about myself. We had fun together and got along well. The fact that he made less than me didn’t matter (although the fact that he sucked with money did – but those are two very different things!).

The best way to mitigate differences in salary (regardless of who the breadwinner is) is to have adult conversations about money. Yes, I know, these are tricky, but they are necessary if a relationship is going to work.

It’s not really necessary in the early stages of the relationship (in fact, it might be better to not discuss finances until you have been dating for a while), but be cognizant of affordability when planning dates. However, it becomes incredibly important if you decide you want to get serious. It is important to ensure that both partners feel like the contributions are fair and equitable, regardless of who is making more. There are tons of methods of doing this- some couples do a 50/50 split regardless of who makes what, while others contribute based on a percentage of each person’s income. The only right way is the way that works best for your relationship.

I briefly mentioned non-monetary contributions above, but people don’t always recognize how important they are to a relationship. Things like emotional support – being someone’s cheerleader, having someone’s back, and just being a sounding board are such valuable contributions that are often dismissed or thought of as unimportant in comparison to the financials. Things like planning, taking care of things around the house, and contributing to the mental load are also super beneficial and important to a relationship. Unfortunately, these important contributions are often thought of as things women should bring to the table, not men. That does a disservice to both men and women.

Men are just as capable of being emotionally supportive to their partners as women are. Women are just as capable of working long hours and bringing home the paycheck. As a society, we are making great strides in recognizing these things as truths, but we clearly aren’t there yet. As more and more female breadwinners stand up and say how proud they are to bring home that bacon, and more and more men say how proud they are to support their wives in other ways, this will change. We are on the brink of it now, and it’s an incredibly exciting prospect!

5 thoughts on “Being a Female Breadwinner”