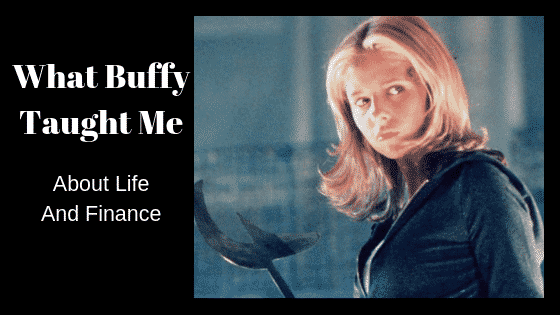 Buffy the Vampire Slayer is obviously my favorite show of all time. I even wrote a post about how amazing it is! But not only is it a great show, it’s also holds tons of valuable life lessons. Buffy taught me so much about life, and surprisingly enough, it also taught me a few things about finance. And if you’ve never see Buffy before, watch it for free with Hulu or buy the seasons with Amazon Prime.

What Buffy Taught me about Life

Buffy the Vampire Slayer is basically one giant metaphor about life. Almost every episode has an overarching theme that involves real life struggles. The show covers growing up, surviving high school, fitting in, finding your place in the world, coping with family drama, and dealing with less than healthy relationships. There are so many life lessons to be learned that it’s hard to focus on just a few, but I’ll try to pick the ones that resonated with me the most.

“The hardest thing about this world is to live in it.”

It seems dire, but it’s true. Life can be hard. It’s not easy to get up every day and deal with the struggles of adult life. There are so many different priorities to juggle, sometimes it’s a win when we make it through the week! Buffy illustrates this struggle in pretty much every episode. In the early seasons, Buffy juggles school, keeping her mom’s approval, being a normal teenager, and of course her slaying duties. In the later seasons, she juggles a career, caring for her sister, taking care of the house, and being there for her friends with her slaying duties. It’s not easy for her, but she’s strong and she keeps fighting.

This lesson isn’t limited to Buffy. Buffy’s first love, Angel, was struggling so much with the guilt from the things that he did that tried to kill himself.

“Am I thing worth saving? Am I a righteous man? The world wants me gone!”

But it’s worth it. Angel lived, and ended up saving the world on numerous occasions. I doubt any of us will do anything that hard core, but we all make our little corners of the world better every day. And that’s worth the struggle.

Be comfortable with yourself

Throughout the series, Buffy struggles with relationships. She’s pretty terrible at them, which is one of the flaws that makes her such a great character. She actually realizes that in season five though, and rather than pursue another losing relationship, she decides that she needs to get to know herself before she will ever be happy in a relationship. She has to be comfortable with Buffy first.

No Man is worth your life – ever!

Buffy pretty much hits you on the head with the fact that no man (or woman!) is worth your life. Although there are plenty of examples in Buffy of the main character’s choosing their own health and well-being over a significant other, the best example is in season seven’s “Him”, where Dawn literally lays down in front of a train to prove her love for some dude (Love spells are dangerous folks!).

Obviously most real-life examples aren’t this drastic, but it’s way too easy to lose yourself in a romantic partner. I was losing myself when I was stuck in a relationship with an alcoholic. I was becoming an angry, bitter shell of myself. Buffy taught me it was ok to still be myself, and not get wrapped up in his drama. Buffy gave me the strength to finally end a toxic relationship for good. If Buffy can kill her lover to save the world, I can break up with a toxic boyfriend to save myself.

Its all about Power

“Power. I have it, they don’t. This bothers them”

When it really comes down to it, life is all about power. We all strive to have power over ourselves and our own lives, while others seek to exert power over us. We often fall into the trap of letting others have power over us, whether it be our employers (or the Watcher’s Counsel in Buffy), our families, our friends, or even our partners.

Buffy the Vampire Slayer explores the theme of power over and over again throughout the seasons. In season three, the Watcher’s Counsel takes away her power to put her through a barbaric and unnecessary test, and in season five that same counsel tries to trick Buffy into giving up her power.

Buffy also explores the dark side of power. In Season six, Willow becomes addicted to powerful witchcraft. She uses her magic to change the world to her own liking, rather than to help people. Her abuse of power is so out of control that she erases her girlfriend’s memory, effectively taking away her ability to be an equal partner. Willow’s lust for power eventually leads her down an incredibly dark path, one that puts the entire world in danger.

Power doesn’t have to be dark. At the series end, Buffy decides to share her power with thousands of other girls; empowering women across the globe to take control over their own lives in one of the most compelling scenes of the entire show.

“I say we change the rule. My power should be our power. Every girl who could have the power will have the power. Are you ready to be strong?”

Buffy taught me that I have power, and I shouldn’t be afraid to use it. She showed me that I can be strong, even in the face of adversity. But she also taught me not to abuse that power; because that only leads to pain.

What Buffy Taught me about Finance

Weird that a teenage drama would inspire money lessons, isn’t it? But Buffy didn’t shy away from any topic! In fact, it was one of the first shows to talk about investing in stocks online! Sure, it was a one-off remark, but I’m impressed it even happened! Fortunately, since I discovered Buffy in 2015 and not in 2002 when that episode aired, I was already well versed in the world of online trading. Buffy’s financial lessons may be a little more sparse than it’s life lessons, but it definitely had a few gems.

Sometimes you Have to take a Crappy Job

You gotta do what you gotta do to pay the bills, even if that means flipping burgers at the Double Meat Palace. In season six, Buffy takes a terrible low wage job because she has to. Slaying doesn’t pay the bills, and unfortunately, she doesn’t have the job experience or time for anything else.

Xander is the poster child of crappy jobs on the show. He delivers pizzas, drives an ice cream truck, and trolls employment boards while he struggles to find his place in the world. His hard work does eventually pay off though! He finds a temporary position working construction, which he is able to parlay into a career.

Things get rough for Buffy in season six. With her mom gone, it falls on her to fix everything that gets broken in the house. For some reason, monsters keep barging in and breaking all her things – lamps, doors, tables, even pipes! A major plumbing disaster (that came with a giant bill!) is what drove Buffy to get her crappy job in the first place.

Things get broken in my house all time, but luckily, it’s mostly wear & tear stuff rather than monster damage. But Buffy’s struggles did resonate with me. She owned a single-family home and was responsible for all the maintenance – monster related or not. If you don’t have protections on your home, that can get incredibly expensive. Luckily, I bought a home warranty with my home, so most repairs are covered after the first $100 initial inspection fee.

Get rich schemes are never the answer

In season six’s “As You Were”, Buffy is still working her crappy low wage job that we talked about above. Enter Spike, the notorious vampire. He didn’t understand why Buffy was “lowering” herself to take such a degrading position. After she sadly tells him that she needs the money, he hatches a horrible scheme to get money. Spike decides to trade in expensive but incredibly dangerous demon eggs. Of course, his plan is foiled, and his home is destroyed in the process.

Although I would never try to trade in something as dangerous as demon eggs; Spike’s failure offers a valuable lesson. Don’t take the easy way out to make money. Easy money is a myth, and usually a scam. If something seems to good to be true, it probably is.

“But I have their money. Who cares what kind of day they have?”

Anya is an awesome character. She starts out as a vengeance demon, but loses her powers and takes a job in retail at the magic shop. Anya talks about how great making money is every chance she gets. She loves the idea of being a cog in the giant wheel of capitalism, and extols it’s values every chance she gets.

Although many of Anya’s one liners about money are used for comic relief, she’s not always wrong (though she’s often a bit too blunt about it). Money is incredibly important. It can’t buy happiness, but it can give you options and control over your life.

The biggest lesson on finance that you can learn from watching Buffy the Vampire Slayer is that life is expensive, and you need to find a way to pay for it. The different characters in the show face this challenge in different ways. They deal with unemployment, low wage jobs, moving away from their parents, and trying to apply for loans – all real-life stuff that everyone deals with. And it’s freaking expensive! Being an adult is expensive.

It’s ok though. Life may be expensive, but there are tons of options available to help us pay for it. We can do all the things that the characters in Buffy do – and more since using the internet to make extra money wasn’t even a thing back then! Buffy taught us that life is expensive, but it’s also manageable.

What did your favorite show teach you?

I can write and talk all day about how great Buffy is and the life lessons that it imparts, but I think two thousand words is enough. I want to hear from you! What is your favorite show, and what did it teach you about life and money?

1 thought on “What Buffy Taught Me About Life and Finance”