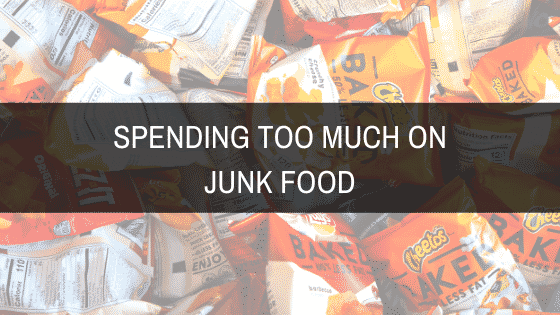 I spend way too much money on junk food. And by junk food, I mean snacks and eating out. In fact, I spent about thirty dollars on junk food a few days ago, just because I was in the mood for some pretzels!  Did I just get pretzels? No, of course not! I also got some flaming hot munchies, chocolate chip cookies, sour punch bites, and tortilla chips. And just for good measure (and because I was starving and hadn’t yet eaten dinner), I got a rotisserie chicken. I may have junk food problem. Sound familiar? Read on to learn how to stop spending too much money on junk food. If it doesn’t sound familiar, you should read on to see how horrible my junk food problem really is. It’s a disaster. Or, you can check out this post on how to break bad habits beyond a junk food addiction. Either way, enjoy my misery!

Trying Not to Spend too Much Money on Junk Food

One of my top goals is to not overspend on food. I make my lunches for work everyday so I don’t have a reason to go out. I also plan out my weekly meals, make an awesome grocery list, and buy only what I need when I go grocery shopping. Unfortunately, I don’t always take my cravings into account when I make this list.

Last week, when I was making my grocery list, I knew that I had to be cheap. Therefore, I only bought the necessities. No junk, no extra chips, no cookies, no snacks. I only bought what I needed to make sure we were fed for the week. Can you guess how long I lasted before heading back to the grocery store for my delicious snacks?  About four hours. Impressive right?

Related: 10 Awesome Ways to Save Money on Groceries

I don’t completely lack willpower. I don’t eat the entire bag or box in one sitting (unless it’s hot fries, I can tear up a bag of hot fries!). My biggest problem is that I’m not realistic. I think I will cook five nights in a row.  Do you know how many times I’ve actually managed to do that? Yeah, not many.

My other problem is that for some unknown reason, I think that I won’t want any snacks. Maybe this is because I make it a point to do my grocery shopping on a full stomach, and I forget how Hangry Melanie can be (trust me, it’s not pretty!). Snacks are a freaking life saver!

My other big budget buster is eating out. Like I said above, I do pack lunches to bring every day. And usually I’m good about eating it. It’s a constant battle though. My coworkers go out to lunch every freaking day. The invite me along with them everyday too. Don’t get me wrong, it’s nice to be included; I’d rather that they invite me than not. That doesn’t change the fact that I probably shouldn’t go.

Then there are the parties. It really is bad form not to go to participate, and for some reason they are so freaking often! Someone is either coming or going, or having a birthday, baby or wedding. Sometimes we do it a little cheaper and have a potluck, but since I don’t know how to cook for more than just myself, I usually end up buying something to bring.

Going out for dinner also gets me. We all have those times where we are running errands and then its just too late to cook, right? We all also have those days where we are just tired, and even putting a frozen pizza in the oven (and doing those dishes!) sounds freaking exhausting. I’m the same. I do eat at home more often than not, but I also have a few days a month where I just want to go grab something.

My biggest problem, the number one reason why I spend too much money on junk food, is that I have crazy cravings. When I want something, nothing else will do. Sometimes I just have to have Lasagna Fritta from the Olive Garden (and that always turns into an expensive day!). Other times I just have to have pretzels.  In those moments, nothing else will do, and I will be a super grumpy face until I get the thing that I want. I may have a food problem.

Usually it isn’t as serious as a full meal at Olive Garden (but those Indian and Japanese food cravings can hit me just as hard! Sometimes I have a craving for a certain type of chips (usually hot fries) or even a delicious freshly made baguette. But if I’m hungry and having a craving, going to the store is definitely not the answer! More often than not, I end up with far more than just whatever will satiate my craving.

Tips for Not Spending Too Much Money on Junk Food

My junk food problem is pretty serious (as you can tell). But I have some tips to stop myself from spending too much money on junk food, and if you’re anything like me they might help you too!

The first thing you can do to prevent yourself from spending too much money on junk food is be realistic. If you are a snacker, include snacks in your grocery budget. That will prevent you from going to the store and spending thirty dollars in snacks at one time. If I had just spent five to ten bucks on snacks when I was shopping, I could have avoided that entire debacle.

Give Yourself a Break

Another way to prevent yourself from spending too much money on junk food is to give yourself a break. You may be feeling super proactive on the weekend, but you don’t know how the week is going to go. We may have all of the best intentions, but one or two bad days can destroy your desire to cool.

If you think that you might have one of those nights, buy some easy meals. Frozen pizza and frozen lasagna are some of my go-tos, but you could also opt for a pre-packaged salad or something fresh from the deli section. These things have hardly any prep time and are super cheap. Granted, you may need more than one if you have a big family to feed, but it’s still cheaper than going out to dinner.

Learn to Say No

You’d be amazed at how much money I’ve saved by saying no to co-workers who want to go out.  Its not easy, I really want to go with them. I love the comradery, and the food is usually better than whatever I packed.

Related: How to Not Spend all Your Money

But it’s just not worth it. My packed lunches cost me about two bucks a day. That’s way cheaper than any meal I’m going to get if I go with them. I find other ways to engage in office comradery, like having pot lucks in the office and going to happy hours (but only drinking water!).

Give Yourself a Treat

Finally, give yourself a treat every now and then. But include it in your budget!  That way, you can reward yourself for being good most of the time and you don’t have to feel guilty about spending outside of your budget.

My weekly treat has been bruschetta lately. We include French bread, basil, and tomatoes in our grocery budget and make it as soon as we get home from the store. Nothing beats a fresh bruschetta. But I also include going out in my budget. Heck, I even included two nights out a month when I was trying to do a no spend year! I was being realistic in that I wouldn’t be able to not go out to eat ever in a year, and I was giving myself a treat every now and again so I wouldn’t splurge. Two birds!

How Do You Control Your Spending on Junk Food?

Do you have any tips to stop spending too much money on junk food?  We’d love to hear about it in the comments!

6 thoughts on “Spending Too Much Money on Junk Food”