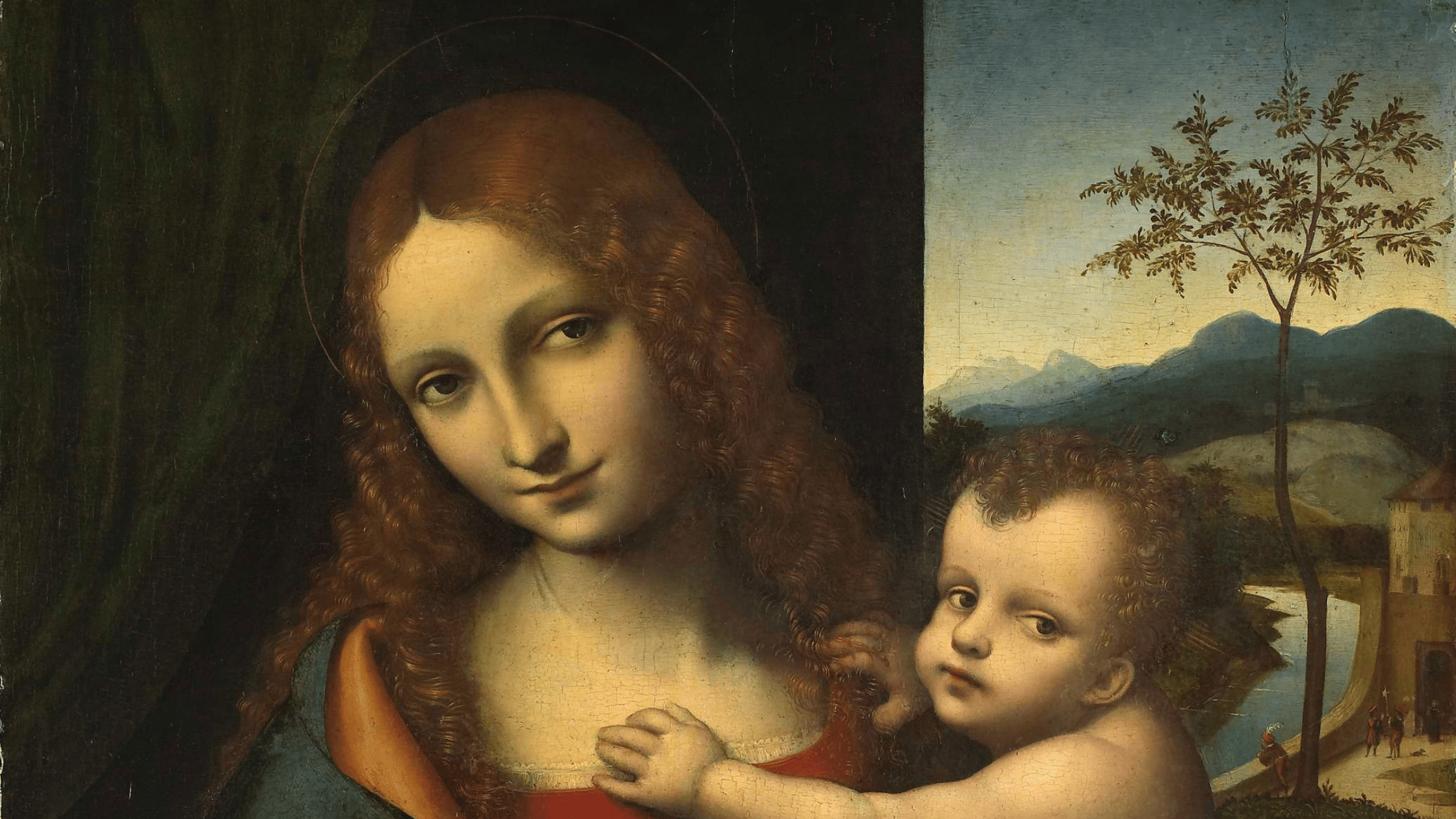 Artists throughout the ages have celebrated Christmas in the best ways they know how: with spectacular paintings celebrating the season’s joy, spirit, and true meaning.

Here are twenty of the most iconic Christmas paintings ever created. Lift your Christmas spirits by enjoying these fabulous works of art.

Good for Old and Young depicts grandpa and grandchildren slipping on an icy path in front of the house while mom looks on from the doorway. Rockwell’s Deadman’s Hill and Young Love: Sledding are also iconic images celebrating the winter season.

Thomas Kinkade is well known for magical landscapes instilled with a fairy-tale-like quality. Kinkade Studios features over 50 works celebrating the spirit of Christmas, any of which would make perfect additions to your holiday décor.

The 2007 work Spirit of Christmas features a cozy winter village with a frozen river running through it. The painting reminds us of a simpler time, and although snow covers the town, the artwork portrays the warmth associated with the holiday.

Kinkade has many other notable Christmas works, including A Victorian Christmas Carol, Christmas Lodge, and Santa’s Workshop.

Philip Straub is a visual artist best known for his science fiction and fantasy masterpieces. In Christmas Town, he uses his trademark bold color to create a romantic Christmas village at night.

The centerpiece is a small Christmas tree in the town center. Straub uses deeper hues of blues and violets to represent the cold of winter present outside the village, but the warm glow of the tree and internal fireplaces keep the villagers cozy throughout the season.

Nicky Boehme embraces the magic of Christmas with artworks showcasing the bold colors and happy scenery associated with the holiday. Though she has numerous fantastic pieces celebrating the holiday, the excellent Christmas Eve embodies the Christmas spirit like no other.

This work depicts a typical main street on Christmas Eve. The road is blanketed with ice and snow, but storefronts glow with warmth, and the prominent Christmas tree stands guard over the shoppers as they get their last-minute parcels.

Other fantastic Christmas works by Boehme include Tis the Night Before Xmas, Good Old Days, and A Fine Winter’s Eve, to name a few.

Somebody Knew I was Coming – Haddon Sundblom

Haddon Sundblom created the image of Santa Claus as we know it. Somebody Knew I was Coming depicts St. Nick, hatless, in a red suit enjoying an ice-cold Coca-Cola.

Sundblom created a variety of works for the Coca-Cola companying featuring Santa. They were primarily used as advertisements for the drink company, but the picture of a jolly man in a red suit warmed our hearts and became the icon we know and love as Santa Claus.

French impressionist Claude Money arouses joyful feelings of winter wonderlands with his impression of a village blanketed with snow. The work uses blends of white and blue greys to suggest a winter storm, but the people gathered near the rear of the scene indicate the storm has passed and the village has turned into a spectacular winter playground.

Monet is known for repainting the same scene in varying lights from different angles. He painted Argenteuil in the snow at least 18 times in varying degrees of snowmelt.

The company Currier & Ives commissioned paintings to instill a sense of nostalgia into their customers. American Farm Scenes No 4 depicts a father and son driving a sleigh on a cold winter’s day.

The subdued color scheme gives the painting an aged look, but the fresh white snow and hints of red that shine through in the sleigh make it an iconic Christmas scene.

Robert Braithwaite Martineau was a 19th-century English painter without much renown. However, he created the wonderful Christmas Hamper, an oil painting depicting a happy Christmas morning.

The family gathers around a wicker hamper as the father pulls out a gorgeous bird, which will most likely feature in the evening’s Christmas feast. Subdued reds and greens feature prominently throughout the piece, working as both favorite Christmas colors and due to their opposite locations on the color wheel.

The Spirit of Christmas – Greg Olsen

Greg Olsen is a Christian painter who focuses on biblical and Christian imagery. Though most of his works feature an adult Jesus, his small series of Christmas paintings represents everything we know and love about Christmas.

In The Spirit of Christmas, Olsen depicts Santa in a home, marveling at the nativity scene displayed on a small table. Santa holds the baby Jesus figurine, looking at the image lovingly. The work reminds us that although Santa and Christmas trees are fun, Christians find the true meaning of the holiday in their lord and savior.

This brightly colored work showcases a happy home covered in snow around Christmastime. Children in the foreground mail letters to Santa and pull gifts on the sled, while others in the background delight in building a frosty snowman. The beckoning glow of the home represents the joyful warmth of home, while the cool surrounding blue showcases the cold winter night.

Prior to the Impressionist era, many famous paintings featured religious motifs. Popular Christmas imagery, such as the nativity scene or images of Mary and Joseph, featured heavily in Renaissance-era Christmas paintings.

Famed Renaissance artist Sandro Botticelli, the creator of one of the most famed paintings of all time, the mythical Birth of Venus, celebrated the Christmas spirit with a nativity scene.

The work displays Joseph, Mary, and the baby Jesus in a manger, surrounded by the magi and angels. The bold, flat colors are typical for early Renaissance work, but the weird Greek inscription and small devils betray the joy of the piece, suggesting that Botticelli had mixed emotions about completing the work. The original is on display at the National Gallery in London.

Adoration of the Shepherds – Caravaggio

Though numerous Renaissance artists portrayed similar scenes of shepherds worshiping the newborn lord, none is as striking and visceral as Caravaggio’s 1609 work.

The Baroque painting uses dark hues contrasted with bright, bold reds to illicit strong emotions of despair. The longing, wistful gazes of the shepherds balances the darkness, evoking a tiny sense of hope emerging from the darkness.

Adoration of the Shepherds may not be joyful, but it’s a technical masterpiece that showcases the breadth of human emotion, making it a fantastic piece to display all year long.

Adoration of the Shepherds – Giorgione

Giorgione’s depiction takes place on a bright day and celebrates mother Mary in bold light blue. In Christian traditions, blue symbolizes peace and calm.  Making Mary a focal point of the piece with the boldest color highlights the message of peace that this work invokes.

Giotto di Bondone lived in Florence before the Renaissance, but his work took a bold turn from previous Byzantine works and may have influenced the art movement.

His 1305 work Nativity is one of the earliest surviving depictions of the famous nativity scene. Mary, robed in blue, lays with her newborn child while angels pray above the manger. Farm animals and shepherds complete the scene.

The Census at Bethlehem – Pieter Bruegel the Elder

Pieter Bruegel the Elder was renowned for mixing biblical illustrations into modern-day scenes. His Census at Bethlehem takes place in a 16th-century Flemish village but depicts imagery from the biblical Census of Quirinius.

The work showcases the village blanketed with snow, invoking a Christmassy feel. Discerning viewers will note the painting’s central figures, a man leading a donkey carrying a pregnant woman blanketed in blue. The figures represent Joseph and a pregnant Mary, reminding us that Christmas is right around the corner.

Christians celebrate Christmas as the birth of their savior, Jesus Christ. Hundreds of artists memorialized this birth in paintings of Madonna and Child, showcasing the virgin mother with the newborn infant. Though not traditionally considered Christmas paintings, these works celebrate the holiday’s religious meaning.

Here are some of the most iconic Madonna and Child paintings from influential artists throughout the ages.

The Madonna and Child motif was one of Renaissance great Raphael’s favorite subjects. He depicted the famed duo numerous times, but one of the most magnificent is one of his last, the Sistine Madonna.

The Sistine Madonna centers on Mary, cloaked in blue, holding her infant child. The dark green curtains work to put a spotlight on Mary, drawing your eyes to the center of the piece.

Although the entire painting is marvelous, the most iconic feature turned out to be the two little cherubs at the bottom. These delightful creatures are more famous than the painting as a whole and are known on their own as “The Two Cherubs.”

Our Lady of the Don – Theophanes the Greek

Little is known about his 14th-century icon featuring Mary nestling Jesus close to her cheek. It’s held in the Tretyakov Gallery in Moscow and is thought to be a gift presented to the Grand Prince of Vladimir in 1380.

The MET in New York City holds an early surviving depiction of Madonna and child. This work may date as early as 1290, but the exact date has yet to be determined.

Before the Renaissance, most art depicted religious iconography. Paintings of Mary and her child were common in this era, but many are by unknown artists or have been lost over time.

The most famous artist in the world’s take on the Madonna and child motif features the new mother nursing her infant child.

Like many Renaissance painters, Da Vinci depicted Mary wearing blue to represent the calming peace of the divine. The baby Jesus is naked, his pale skin representing innocence.

Baroque artist Giovanni Battista Salvi da Sassoferrato created numerous depictions of the mother and child, but the versions with the sleeping Christ are the most iconic.

The paintings feature Mary cloaked in blue and red, holding her infant son. The Baroque style injects humanity into their visages. Both figures have calm, innocent expressions, which is a shift from the emotionless figures in earlier works.

Where to Get Christmas Paintings?

Though most of the paintings on this list are museum pieces, you can get prints at numerous locations online. These top online art marketplaces offer prints of all your favorite pieces.

For an original Christmas painting, check out Etsy. Thousands of rising artists sell their wares on the creator’s marketplace, and a Christmas sale would make their day. You can also search Artpal and Instagram for aspiring artists for unique pieces that speak to your sense of Christmas spirit.

These twenty works showcase the variety of works associated with Christmas throughout the ages. Christmas paintings run the gambit from religious iconography celebrating the birth of Jesus to modern masterpieces evoking the joy of winter wonder.

Whatever your desire for a painting to celebrate the season, an artist has created it.