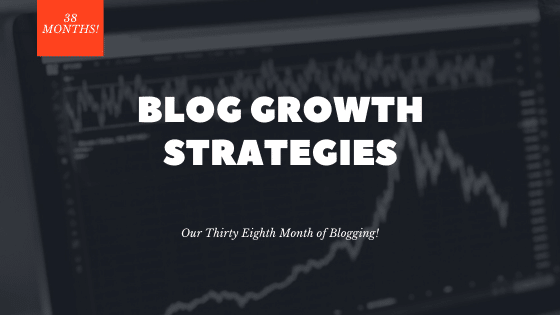 After a lackluster 37th month, we got back on track during our 38th month and reached over 10K pageviews yet again. I’m pleased to say that most of the issues we came across last month are fixed. 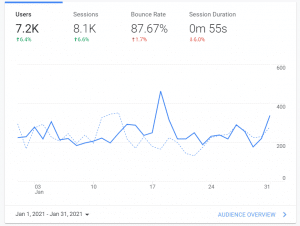 Our top driver of traffic continues to be organic search. We had nearly five thousand users finding us via search engines this month, which is amazing. Hopefully, that number will continue to creep up, and in the next month or so we will actually hit that target and beyond!

The top page is still “How to be a Twitch Affiliate”, with over a third of all our organic traffic. I learned last month how dangerous it is to have all your eggs in one page’s basket, and I’m trying really hard to write more posts with SEO in mind, to spread that wealth a bit more.

It does seem to be working, as the remaining two-thirds of organic traffic is pretty well spread out. Six pages had over two hundred visitors, and all of the top ten had over a hundred. Nearly two hundred total posts had at least one visitor via organic traffic – and that just shows that I didn’t know anything about writing for high volume search terms for the majority of my blogging career. But at least that one person per month who is looking for that particular term is finding my content!

Although we did have a post featured on MSN this month, that didn’t result in much traffic. However, one of our good blogger friends got their post on cable alternatives featured on MSN, and they had linked to our older post on cutting cable. The lesson here is to make friends with other bloggers and work together because you can help each other.

Our second-biggest source of referral traffic is Github. To be honest, I can’t quite figure out what Github is. It seems like a repository for online information, and I guess someone added some of my posts to it. Whatever, I’ll take it!

We also got a special feature on Personal Finance Blogs. They featured our post “How Much Money Do You Really Need” on one of their daily “best of” lists, which resulted in a nice referral boost.

Still, we had over 700 users visiting us directly during our 38th month, which is pretty spectacular. Many of those are our awesome subscribers, who get fresh content delivered directly to their emails! Don’t miss out – start getting updates right to your inbox!

Partners in Fire is not doing well with social media. We had less than 500 users finding us on all of the social media platforms combined! However, since our focus is more on SEO than on social media, it makes sense that our traffic from this source would be lackluster.

Pinterest was our highest performing social platform this month, and we had about the same number of visits from the platform as last month.

I still haven’t implemented all of the Pinterest SEO strategies that I learned from Pinterest Ninja, but I’m still very happy to be getting far more traffic than I was getting prior to taking the course. I’ve also started experimenting with making my own pin designs rather than using templates, which has not only been fun, but it’s been extremely educational as well. Maybe one day I’ll even have a packet of templates for sale!

We had close to 100 users visiting us from Twitter this month, which is a little more than last month. I’m still focused on trying to build the account and network with folks in other niches, which I think is a more important use of the platform at this stage in my blog growth. Twitter is the absolute best platform for driving traffic and getting noticed when you are a brand-new blog, but the focus should definitely be  Pinterest and SEO for long term traffic.

We also managed to get close to 100 users via Facebook this month. The only thing I’ve used the platform for is to share my newest posts and revive some older content with the revive old posts plugin. Facebook is not a primary focus, but I’m pleased to see a little bit of traffic from the platform.

Partners in Fire is continuing to knock out killer content. We started the new month and new year with an uplifting post about believing in yourself, and then dove into a combination of great financial and passion fire topics. First, we published a review of Mistplay, an app that pays you to play mobile games.  What better way to combine finance with our love of gaming?

Next, we got deep into finance with a look into what the investment advice “Buy Low Sell High” really means. It was interesting to write that post right before the giant fiasco with Gamestop, and I hope some people took it to heart. We continued with more Passion Fire content, publishing a review of the game, Immortals: Fenyx Rising, and the art post of the month, where we shared some Painting Ideas.

We started a special content series with our post on Discord Servers, which explains how discord works and why every content creator should be on the platform. Be on the lookout for monthly content explaining how different aspects of the app work! If you don’t want to miss it – be sure to join our email list!

We rounded out the month with a post on how a brain dump can help you be productive and two traditional money posts; one on cutting food costs with cheaper food choices, and the other on the best websites for selling stuff online.

All in all, I love the mix of content that we deliver each month, and I hope you do as well!

I know I’ve talked about this every month, but I still think improving our writing for SEO is going to be the number one way to improve readership. We can see it now that “FU Money”, the first post we wrote with SEO in mind, is starting to rank. Hopefully, the other posts we wrote with an SEO focus will start to rank soon as well.

We are also hoping to improve our readership by continuing to produce a variety of content under the Passion Fire umbrella. I try to mix up the monthly content plan by having a few posts on gaming, a few on traditional financial topics, and an art post or two each period. Hopefully, the variety will appeal to a broader swath of the population, and we will be able to grow from there.

I’m also working behind the scenes on projects designed for networking. The goal is to network with more bloggers in the art and gaming niches, and hopefully, I will find ways to do that.

Another big move we made in January with hopes for increasing our readership is creating more content on YouTube. We had a few videos in the past, but mostly the channel was just uploads of full Twitch streams, which no one really wants to watch.

Instead, we started making more content like the Coast Fire video, that I can embed directly into blog posts. The goal is that people will watch the videos directly on the website, and spend more time interacting with the page.

However, a secondary goal is to increase brand awareness, as the videos are also searchable via YouTube itself, and many videos won’t be embedded into blog posts.  Be sure to check out the YouTube channel and hit that subscribe button so you don’t miss any cool new uploads!

We decided to try something new with monetization this month. Instead of trying to make money, we decided to spend all the money. I know that this goes against everything I’ve been working towards for a few months, but hear me out.

Partners in Fire is a business. And in order to grow and expand, businesses need investment. I’ve ignored that advice in the past but took that to heart this month. I officially filed to make Partners in Fire a business by filing an LLC. We also invested in some additional tools and branding that will help us grow the business. As you can tell, we got a new logo and we also decided to pay for Canva Pro, Grammarly Pro, and Convert Kit’s premium service. We are also payed for BlogFixer to come in and fix a bunch of our messed-up links, and are still part of the SEO Hustle group that gives us access to tools like Moz and other premium optimization tools (ask me about it if you’re curious!). All in all, I spent a whopping $950 on the blog this month. That’s a massive investment!

You’d think that if I’m spending money like this, I’d be making it back. Unfortunately, that’s not the case. January was one of our lowest-earning periods in months. I made a little over fifty dollars this period, most of which was due to ads.

Most of those expenses were yearly, so moving forward running Partners in Fire will cost $200 a month. Hopefully, I’ll be able to start earning that and more in the very near future!

Obviously, I’m investing so much money into the blog because I have faith that I can grow it into a successful business. These next six months will answer truly answer that question. We’ve spent a lot of time in the past few months building up new processes, focusing on SEO, and working to build Partners in Fire into a legitimate brand and company. I’m confident that if we stay the course, we will meet those goals in 2021.