There are so many freaking types of financial independence – it can get super confusing to keep them straight! Having so many options keeps the fire community inclusive and gives tons of people the opportunity to achieve financial independence who may not be able to pursue the traditional path. One of those options is Coast Fire (or Coast FI, as it’s commonly called).

What is Coast Fire?

I’m at Coast Fire right now because if I don’t put any more money into my retirement account, it will still grow enough over the next 30 years to give me $40,000 a year in retirement (assuming a 7% per year growth). That, along with my other retirement income (pension, social security, etc.), will be more than enough to give me a happy (though not rich) retirement.

I guess it kind of makes sense that people would take away the “retired early” part of the acronym. People who are pursuing Coast FI aren’t necessarily planning on retiring early, but they do want to ensure that they are financially independent when they retire. I think that’s a goal that most of us can get on board with.

Coast FI as a Milestone

For many people on the path to financial independence, coast fire isn’t the end goal. Instead, it’s a mile marker. Reaching Coast Fire is a huge achievement, but many people don’t stop there. Just knowing that your retirement is secure is an amazing relief, and it helps give people the motivation to keep going on this Fire path. It’s way easier to stick with a plan and a goal when you have milestones that you can celebrate along the way, and I think Coast FI is a major one.

What is Barista Fire?

Barista FI is another type of financial independence. It means that you have enough money in savings, investments, etc., to pay the majority of your bills, but not enough to pay for everything you might want – like that random game or dinners out – you know, the spice of life type stuff. You need a job to pay for these little things.

But these things are cheap. You don’t need 100K per year to buy Animal Crossing. You only need a little extra, so you decide to take a low-stress part-time job to pay for these things. The name Barista Fire comes from quitting your job to work at the trendy little coffee shop down the road for a few days a week. I don’t think that would be stress-free, but I’m sure it is for some!

If you want to learn more about Barista Fire, read this post. Some people will say it’s the same as Coast Fire, but I disagree.

As I said, some people use the terms coast fire and  barista fire interchangeably. I don’t consider them to be the same thing. In my opinion, Barista Fire is a step closer to true financial independence. With Coast Fire, you have to continue to work your high-paying or stressful job in order to pay your living expenses.  With barista fire, you can work an easy, stress-free job, or reduce your hours, or something like that.  I may be the only person ever to make that distinction, but that’s how I see it.

How Does Coast Fire Work?

Coast Fire works due to the magic of compound interest. That means the money that you have invested now will make you even more money as it grows. This is illustrated very nicely with a graph from Wikipedia. 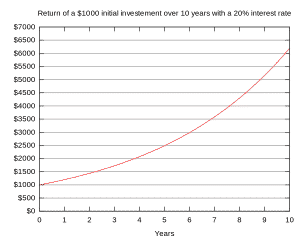 Now I don’t know anywhere that you’re going to get a 20% interest rate, but the same concept applies even with smaller rates and larger investments. Thousands of people become millionaires by having a healthy savings rate and relying on interest. This is how we get to Coast FI. We make sure that we have enough saved in our retirement accounts that given enough time (Usually that means from whatever your current age is to the traditional retirement age, 65) it will grow to where we need it to be to cover traditional retirement costs.

How Is Coast Fire Calculated?

In order to calculate Coast Fire, you need to figure out how much money you will need in retirement. Consider how much life costs, inflation, and any fun that you might want to have in your golden years.

Once you know how much money you need, you’ll have to figure out what it will take to get there. Be sure to consider all of your different income sources in retirement. Most people will have a 401K and social security, but you may have some other sources. Some people still have pensions; some might have side hustle income, business income, an inheritance, whatever the case may be.

Next, you need to calculate whether your current investments will be enough, and if not, how much will be. Check out this excellent case study on calculating coast fire to see my real numbers and how I determined whether I was at Coast Fire or not – it will go over how to calculate Coast Fire step by step and offers some advice on which calculators to use!

If you want even more information on how to calculate your coast fire number, check out this video I made on Youtube. It shows you two excellent calculators that you can use and how to use the different features. Make sure you hit that subscribe button if you enjoyed the video!

One of the biggest limitations of Coast Fire (for younger folks) is all of the unknowns. I’m in my mid (ok, late) thirties – I won’t reach the traditional retirement age for another thirty years! Can you imagine what the world is going to look like in thirty years? Exactly, and neither can I. Here are some of the biggest unknowns in regards to Coast FI:

Most people who are talking about Coast FI are invested in the stock market, and we all know that doesn’t behave consistently. For example, I’m only Coast Fire if the market cooperates and grows that 7% per year on average. And unfortunately, you never know what will happen with the stock market. 7% is in line with historical returns, but that’s never a guarantee of future returns. Some years are better, but some years are much, much worse. And if you are unfortunate enough to retire right at a downturn year, your nest egg could really suffer. That might put your plans for financial independence at risk.

If your Coast Fire estimate includes rental properties or real estate wealth, you will have to be wary of the housing market as well. Everyone thought it would go up and up until it suddenly crashed in 2007. We’ve since learned that nothing goes up forever, and all markets are cyclical, but can you guess when and where the next housing crash will occur? Neither can I, so it’s definitely something to be aware of when determining your number.

Another dangerous unknown is inflation. If you are more than a few years from retirement, you probably need to be invested in the stock market. Cash is king, but if it’s not making you any money, inflation is going to eat away at that buying power.

You also need to take this into consideration when developing your Coast Fire number. Forty thousand dollars per year might be more than enough for me to live frugally on today – but will it be enough in thirty years? Will it be enough at the end of my retirement fifty or sixty years from now? It’s impossible to know, but I’m guessing that it won’t be.

A final unknown – which could be either good or bad depending on how things go – is policy decisions that affect us and our financial security. What will the policy of the 2050s look like? Will social security still exist – and if so, in its current form? How will tax law change? These are things that are constantly discussed at the policy level, and it’s almost impossible to know which way the tide will flow.

There are also so many new policy ideas being discussed this year – including universal basic income, universal health insurance, and free college tuition. How would these policies, if enacted, affect your journey to financial independence? How would policies that we haven’t even thought up yet affect it? Some policies might make it exponentially easier, while some may make it that much harder. It’s impossible to know.

So How do you Achieve Coast FI then?

I didn’t mean to scare you with the unknowns or make you think it was silly to pursue Coast Fire. It’s definitely not, and it’s still entirely achievable! If you are mortgage-free and a few years from retirement, most of this won’t have a huge impact on you (and congratulations!). But, these things will have an impact on some of us, so how do you plan for and mitigate such big-picture unknowns?

My answer is to add a little more money to your Coast FI pie. I’m technically Coast FI now – if I could access my nest egg at the same market conditions we are in now. I know that’s not possible, so to mitigate it, I’m upping my Coast Fire number. I’m continuing to save and invest in my retirement accounts even though the math is there for me to quit now. But the math doesn’t account for these unknowns, and a little bit of padding never hurt anyone, did it?

Coast FI and You

Have you thought about Coast FI? I’d love to hear about your coast fire number and how you’ve accounted for the unknowns in your calculations!

7 thoughts on “What is Coast FIRE? Everything You Need to Know”