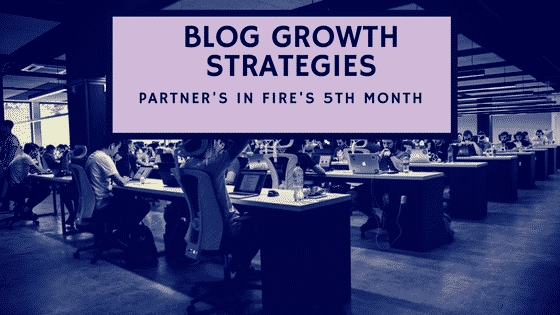 Wow our readership exploded in month five!  But only for a day really haha. We ended the month with a whopping three thousand users!  It’s a new record!

How did we get so many users?

Partners in in Fire was lucky enough to get featured on Rockstar Finance this month!  Our article The Worst Financial Mistake of My Life was featured in Rockstar Finance’s April 10th Features! I’m not really sure how it was chosen, heck I didn’t even realize it at first!  I thought something strange was going on when I kept getting legitimate comments on the article.  So, I did some online digging, and found my post on the Rock Star Finance main page! Super Exciting Stuff!

After an amazing day of lots of page views, we were also featured in The Financial Diet’s weekly round up!  What an amazing week for Partner’s in Fire! I did an excellent job of sticking to my posting schedule this month. Unfortunately, I got sick during the last week and skipped posting on the last Thursday. I even had everything drafted up and ready to go, I just didn’t have the energy to do all the social media posting or to proof read, so I decided to wait and post it next week. Sometimes life happens, and that’s ok.

Obviously, the majority of our users this month came fromRockstar Finance and The Financial Diet (Thanks again guys!). But we did pretty well with our social media platforms as well.

Our Pinterest referrals are really picking up steam. We had 174 referrals from Pinterest this month, almost 100 more than last month!  It outpaced Twitter for the first time ever! I think that Tailwindaccount really is starting to pay off. It hasn’t led to monetary conversion yet, but page views need to come first.

With 96 users, Twitter was our second biggest social media referrer this month. We didn’t do as well on Facebook this month as we did last month, but I think that is because I skipped sharing a few of my posts on Facebook. I didn’t want anyone to take offense at things that weren’t meant to be offensive, so I decided not to share.

Though being featured on some major Personal Finance sites led to lots of page views, it did not lead to lots of affiliate clicks or sales. We did have a handful more clicks to Amazon than in previous months, but it did not generate any sales.

Our other affiliates, such as Flex Offers and Clicky Homes, still haven’t generated much interest. I think the reason for that is because I refuse to sell products I don’t believe in, so I’ve greatly limited the types of campaigns I will run from Flex Offers. Clicky Homes is a great program, but it is only useful to a small subset of the population (realtors). I’m ok with both of those things though, I know that if people visit my site and actually click through to an affiliate, it will be useful to them. That’s more important to me than making money.

You’d think that with over 3000 pageviews, my ad revenue via Adsense would have increased. That was not the case. I think I only have Adsense ads on a few of my pages, and those were not the pages that got the views. According to Adsense, I only had about 300 pageviews during the last month. This was not enough to make a dent in our earnings.

I don’t want to destroy any user experience I have, so I’m not going to change the way my ads are laid out. However, if you are interested in monetizing via google ads and notice a discrepancy between your Google Analytics pageviews and your Adsense pageviews, this may be something worth looking into.

I totally destroyed my goal of getting 500 users for this period!  But I know I got super lucky with that amazing feature, so I don’t think 3000 views every month is sustainable. Partner’s in Fire did get a few extra subscribers from that though, and I’m getting better and better at Pinterest, so I think getting to 500 without any special features is totally doable this next month.

I am keeping my expectations low though, because I have a lot going on in my personal life this month, and I know I won’t be able to stick to my posting schedule. I have SCUBA lessons next week which are going to take a ton of time (but will so be worth it!) and I have a girl’s trip to Vancouver coming up, so I won’t be posting at all that week. Can I get to 500 while skipping three posts?? That’s the goal, so we shall see!

What strategies have you used to help grow your blog?  I’d love to hear about it in the comments!