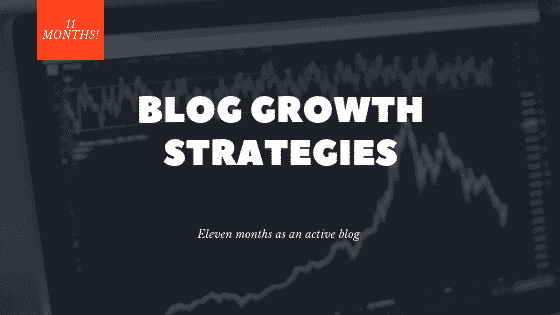 Wow, eleven months! Only one more to go until I’m a “real” blogger! We were so close to our goal of 1000 views this month – only 50 users shy of it! We also had about 250 more users than  last month , so that’s a huge win! Maybe I’ll get that big 1K for my 1st birthday!  That would be awesome! Read onto find out what we did during our eleventh month.

We did an amazing job of keeping up with the posting schedule during our eleventh month. We published 10 posts this period, one every Sunday and Thursday and a bonus guest post by Ryan from Arrest Your Debt. And wouldn’t you know, we tended to have the most visitors on the days we posted! We also started a brand-new feature this month, the podcast “My Boyfriend Sucks with Money”. We’ve published three episodes so far, and are confident that it will be a breakaway hit!

Our readership was fairly consistent this month. We averaged about thirty users per day, and only had two days with less than twenty users. Our worst day saw 15 users, and our best day saw a whopping 165! I’m pretty sure that was due to ESI Money sharing one of our posts that day, so thank you! That was a major outlier though, because we only had between 25 and 45 users on most days. That is a small increase from last month though, and a small increase is still an increase, so I’ll take it! Direct hits were our number one source of traffic this month. Almost half of our users came via direct hits. Many of these were from our awesome mailing list (subscribe now if you haven’t yet to get updates directly to your mailbox!). For some reason, whatever ESI did to drive users to my site was recorded as a direct hit. I’m not tech savvy enough to understand it, but I do know that the article they shared got tons of direct hits on the day that they shared it. I would think it would count as a referral, but who knows how this newfangled tech stuff works.

Social media was our second biggest driver of traffic this month. We had 259 users from social media, almost 100 more than last month! It just goes to show that being active on social media does produce results.

Twitter was the biggest driver of traffic from social media this month. We had 114 users from Twitter, which is almost three times as many as last month! That’s amazing! I think a big portion of this was my one day of commenting on a bunch of people’s blog posts. Who would’ve have thought that being supportive would lead to people supporting you? Crazy how that works out.

My Pinterest traffic is growing slowly but surely. We had 87 users from Pinterest, which is a modest increase from last month. I’m still trying to design better pins that people will want to share (and click on!). I’ve been using Unsplash to find awesome images and Canva to create beautiful designs, but I need to work on my call to actions. I need to make the words so compelling that people can’t help but click! It’s a work in progress.

My Facebook performance is still lacking. I do have 119 likes on the platform, but that only translated into 42 users this month. Obviously, my Facebook presence needs some work. I’m trying to share other people’s blogs and fun financial memes to keep my page engaging and relevant, but it’s not always easy to find the time. I’m still chugging away at it though!

Instagram is the only social media platform that saw a decrease in users this month. I only had 14 users from Instagram this period, three less than last month! My Instagram following keeps growing, but it’s not translating into page views anymore. Maybe one day I’ll get to the 10K mark and I’ll be able to add links to my story! That will be a great day!

Curiously enough, we had pretty much the same number of users from organic searches this month as we had last month. I did a search on Alexa for my keywords, and as it turns out people are finding my site after searching for “Barista fire” and “Coast FI”. Yay for relevant searches! SEO hasn’t been the easiest thing for me to figure out, but it’s something that I’m working on and I think I’m getting better little by little.

We only had 54 users coming from referral traffic this month, a drastic decrease from last month. On the plus side, a bunch of those were from other blogs, so that’s much better than the spammy referral traffic I was getting in the past! I think most of these were due to my diligence in commenting on other blogs (since you have to leave your URL to comment), proving once again that helping others helps you too!

I think we did a great job of posting interesting, helpful content this month. It was crazy that I started writing about a stock market crash right before stocks started losing! I’d like to say that I predicted it, but that would clearly be a lie. The articles were very timely though, and I do think that helped translate into page views. I also posted a blogging award article this month, which hardly received any views. I guess most people don’t find those types of articles useful, however I am still going to write them because it’s a great way to support other bloggers, and that is one of my main goals.

We are working on monetizing Partner’s in Fire via affiliation. Last month we posted about skincare and this month we posted about online shopping. Although those posts have generated clicks, very few have resulted in sales. The powers that be generally say that you have to have between 50 and 100 daily users before seeing affiliate sales, and I think we will get there soon. I’m hoping that my articles with affiliate links are still helpful and entertaining though, I only want to add value for my readers.

We also got our Patreon up and running this month. The primary purpose of the Patreon account is to support the podcast so we can get it hosted on the big platforms like I-Tunes and Spotify. Unfortunately, we don’t have any Patreons yet, so if you love the podcast you can be our first!

We are going to stick with our goal of trying to get over 1000 users. We were so close! We only need to average 34 users per day to get there, and with our average daily users slowly creeping upwards, I think we can get there.