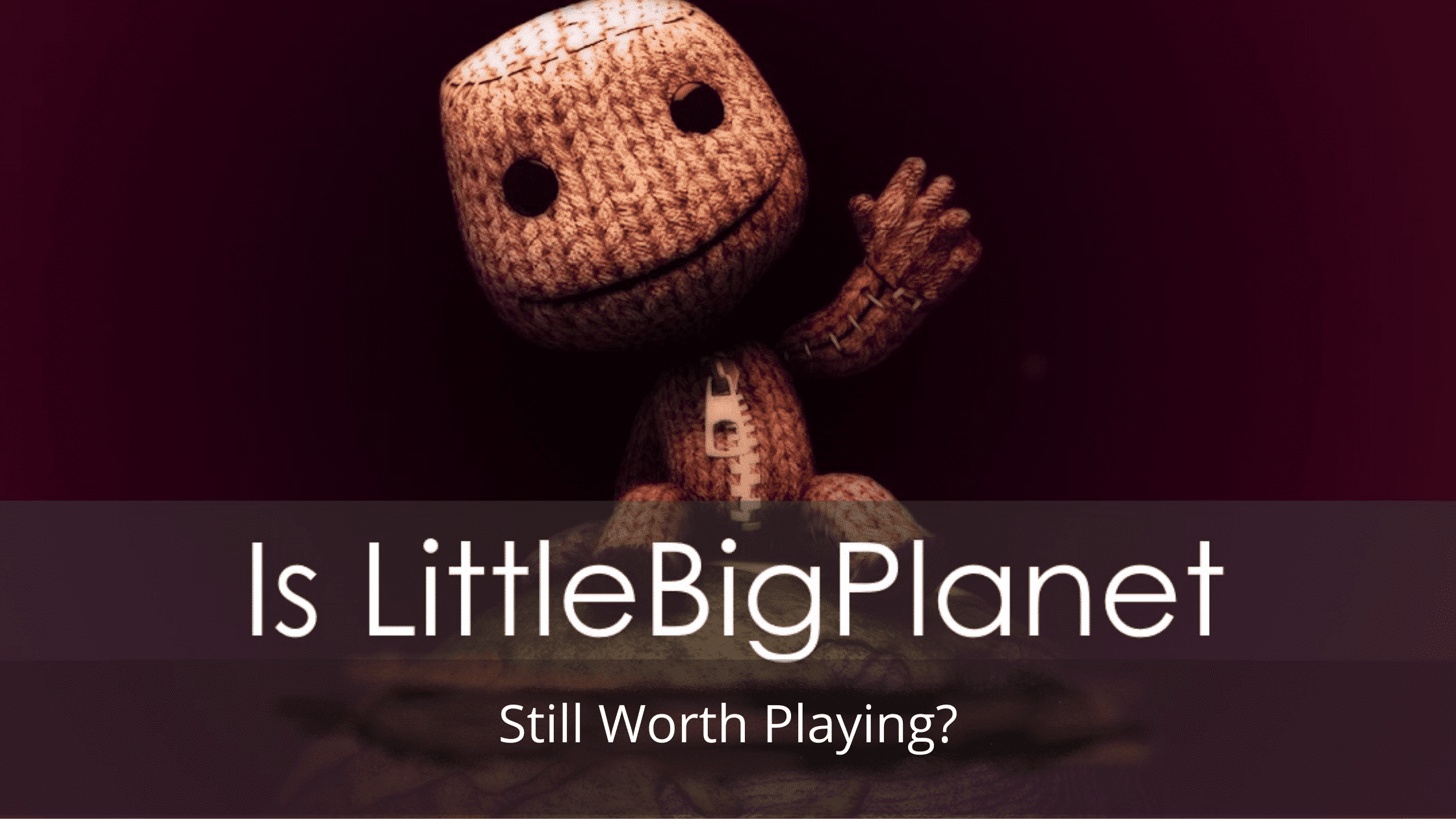 According to a fictional expert I made up, the older a game gets, the more obscure it becomes — or the more its legacy is solidified in our hearts and minds. For a game series born on October 27th, 2008 for the PlayStation 3, LittleBigPlanet at first seems to be an unlikely candidate for a relevant video game in 2022. With the newest title in the franchise, Sackboy: a Big Adventure seeming to suggest the end of its creative roots, what room is there for LittleBigPlanet in 2022?

With anything possible in this game, it has endless streaming potential. Let’s look at this game for what it is now, what it was before, and what it can become in the future. This is our 2021 LittleBigPlanet review.

When I first saw the front cover of LittleBigPlanet in 2009, I was genuinely confused about what this game was supposed to be. If you have never seen the game before, I’m sure you wouldn’t know either! For those not in the know, LittleBigPlanet is a platformer series mainly focused on user-generated content (UGC).

The UGC element of this game was part of a trend of the time it was released. Some of you might be familiar with Spore, a Maxis game for PC which released around the same time with a similar emphasis on UGC. The game even has the same ‘Play, Create, Share’ tagline. In LittleBigPlanet, users can create their own levels, costumes, stickers, and more. Users have created entire games and even incredibly advanced things like cryptographic dual-factor authentication between the game and Discord.

A Brief History of LittleBigPlanet

Media Molecule’s Craftworld idea was not their first. The story begins with the development of the first third-party game on Steam in 2005, Rag Doll Kung Fu. The physics of this game would later inspire the tactile, physics-based platforming of their Craftworld prototype starring Mr. Yellowhead.

Sony’s support and incorporation of the game development studio was rooted deeply in rapid startup culture. Sony issued strict deadlines upon Media Molecule, requiring them to demonstrate appealing versions of the game at events like the Game Developers Conference in 2007.

When LittleBigPlanet was released in 2008, the rush to completion led to an overwhelmingly successful game, but several vulnerabilities to the game’s server security preluded the eventual fate of the game’s online features over a decade later.

There’s a great documentary by Pumpkin Dynasty interviewing the Media Molecule developers about how this game was created.

Let’s talk about some of the key aspects of the game itself: gameplay, story, and music. The create and share aspects deserve their own section for how much they contribute to this game’s legacy.

LittleBigPlanet is a surprisingly physics-centric platformer. It’s a 2.5D title with several ‘layers.’ The player can move in and out of these layers to navigate the world. In the first two games, there are three layers. In the third game, there are 16. In LittleBigPlanet PSP, there are two.

Players, puppeteering the character Sackboy can interact with the world by grabbing objects. They can swing from ropes, drag blocks around, and more with this alone.

There are a number of interesting powerups like jetpacks, grappling hooks, paintball guns, and more. In the third game, players are able to create their own powerups for others to use. One of the most recently added to LBP3 was a hoverboard!

The first game is dominated by gravity-based physics in its story mode. Objects can topple over, get pushed around, and be knocked into things. It’s a great demonstration of what the game’s engine is capable of and is a ton of fun to mess around with. In the second and third games, things get a bit more refined with more advanced tools to move objects around.

Because of the physics-based nature of these games, speedrunning is fairly popular in the community and can result in some hilarious live-streaming shenanigans.

LittleBigPlanet’s stories made by the main developers have a bit of variety. At the very beginning, naturally, things were a bit barebones due to the startup deadline-focused push for the game to be released. It had a very global and diverse focus, emphasizing visiting various locations inspired by real-world locations and cultures. However, its characters were shallow and difficult to empathize with.

Despite this, that didn’t stop Media Molecule from utilizing key themes that reflected the objective of the game itself in the UGC market. The first game’s main villain intends to steal everyone’s creations to become popular. In one of its first major DLC packs, the Metal Gear Solid kit’s story mode ends with villain Liquid’s level copying machine being destroyed. He cries out that he only did it so that the community would love him.

This social commentary was abandoned after the first game, moving forward toward worldbuilding about the world in which Sackboy lives. Characters have interesting and memorable personalities, but there is little compelling material to be had from it. Villains cease to have interesting motives as well.

However, although this may be disappointing for me personally, it’s not necessarily a bad thing for the brand. Its main appeal is to be a family-friendly game for all ages, not to criticize society for how we respect creative attribution.

Streamers probably won’t find the story of the games to be very interesting, but there is definitely a lot to talk about how its story relates to the nature of the games’ online communities.

There is a lot of fun to be had when playing LittleBigPlanet with friends. The story mode offers some unique challenges that only multiple players can complete. There are also a ton of fun ‘versus’ levels where players can compete against one another. Streamers can have a ton of fun collaborating with one another to play levels together and have fun while doing it!

A Platform for Games

As a UGC game, potential content for these games is only limited by the imaginations of the people who play them. This eventually led to Media Molecule’s Dreams for PS4 and PS5, a fully-fledged game development engine. However, the most important part of this process for LittleBigPlanet is the ability to share these creations with the rest of the world.

When you publish a level of your creation in LittleBigPlanet, anyone can play it. Their scores can be sent to the server as well so that people can compete with one another. You can even play the levels with friends. There are millions of levels created by the community that are playable today.

Not Limited to Platformers

LittleBigPlanet 1 made it fairly difficult to make anything other than a simple platformer game. However, it was possible to use the game’s geometric logic system (powered by physical switches, pistons, and other mechanisms) to create things like calculators and other interesting gadgets and creations.

However, LittleBigPlanet 2 introduced new tools to allow all sorts of other kinds of games to be made. Shmups, cinematic cutscenes, party games, and all sorts of other things. There is an insane amount of content out there published to the servers that anyone can access. Streamers can spend hours looking through community content.

An Error Has Occurred

Unfortunately, many of these levels are no longer playable on the games they were originally published on. After several malicious attacks on the servers beginning in March 2021, the LittleBigPlanet servers for PlayStation 3 and Vita were permanently shut down on September 13th. This meant that LittleBigPlanet 1, 2, and 3 for PS3 as well as LBP Vita would never be able to connect to official servers again.

Fortunately, LittleBigPlanet 3 for PS4 is backwards compatible and can play levels that were published on older games before the server shutdown. Eventually, though, even the server for PS4 will shut down as well. That means that a lot of community content will be lost forever.

Although it’s not certain when that will happen, it may be a good idea to document as much as possible before that happens. Live streaming serves to be a great gateway to helping document the millions of levels that have been published. Archives online also exist of community-level files that users can download and play offline.

LittleBigPlanet is certainly not the first video game to have its online services shuttered. Games like Toontown and Club Penguin have also been discontinued. However, they live on in the form of fanmade servers that anyone can play on. These always have a bit of a tenuous relationship with the companies who originally created the games. Toontown Rewritten is extremely careful to respect the intellectual property of Disney, as the media giant could shut down the project at any time if they so chose to.

Custom and private servers are in the works for Little Big Planet PlayStation 3 and Vita right now. Although it requires the console to be jailbroken or the use of an emulator, the means to do so are becoming much easier, accessible, and safer than ever. With the PS3 and Vita consoles becoming so old, there is less of a need for users to remain on retail software.

Once custom online features like LBP Union’s open-source Lighthouse custom server are more accessible to the public, the streaming potential for the games will be maintained into the foreseeable future.

It can sometimes be difficult to get started with streaming with the older LittleBigPlanet titles, but it’s easy to do on PlayStation 4 and PlayStation 5. You can even stream directly to Twitch from these two consoles using the share button.

For the older titles, you are probably going to want to pick up a capture card. However, if you are streaming from a PlayStation 3, a capture card may not be enough due to the HDCP protection that’s embedded in the HDMI signal. You may need to get an HDMI splitter that can strip the HDCP signal.

Although LittleBigPlanet’s popularity has declined in recent years, the audience for it is certainly there. In fact, the server shutdown crisis this year has seen more fans come out into the open looking for content. Streaming this game may actually be a very good move for reaching out to new viewers.

LittleBigPlanet: Into the Future

With a still-thriving community, millions of levels available on PS4, and custom servers powered by passionate fans on the horizon, LittleBigPlanet is still a great game to enjoy in 2021. Although its heyday seems to be behind us, with Sony looking toward moving the franchise in a less creative direction, the game’s legacy lives on with the fans that grew up with it.

The potential for creative content like live streaming online is still there and will certainly stick around for some time. The only limit is our imaginations.

Michael has been playing LittleBigPlanet for over 12 years. He runs the fastest-growing fan website for the game, LBPUnion.com and works to bring creators of diverse talents together to bring great experiences to others in the community.