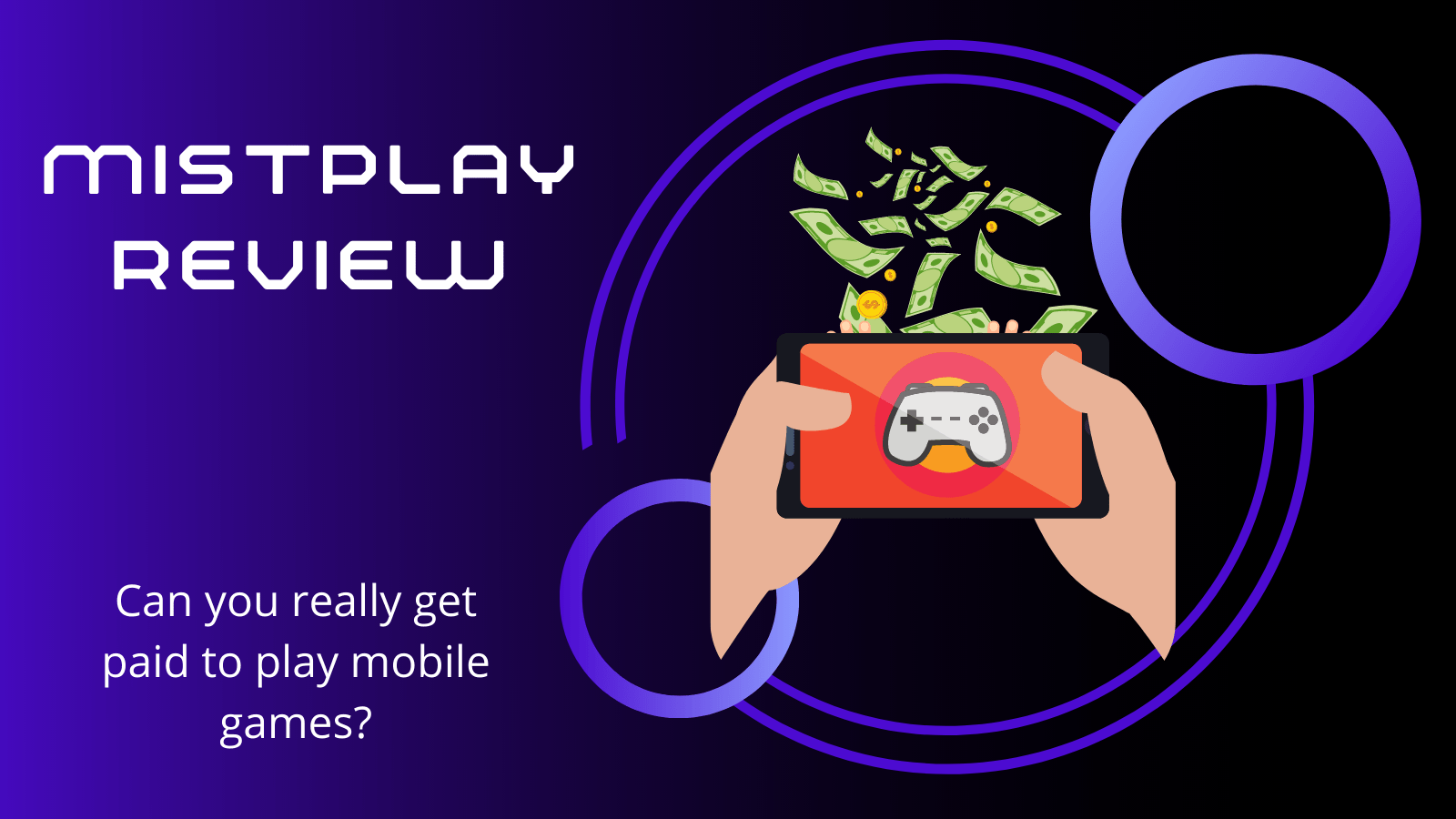 Mobile games are great. They are easy, they are (sometimes) mindless, and they are a fun way to waste a few hours while stuck in lines and waiting rooms. They are also a great way to keep the kids occupied! But did you know you could make money with mobile gaming? Mistplay is an app that allows you to do just that. Here’s my Mistplay review – find out if you should download it and start earning off your mobile gaming habit!

Misplay is a great app for people who love mobile gaming. If you play games like candy crush, brick smasher, word games, or clash of clans type games, you need to be using this app. Get it here.

Here are my ratings for how good this app is:

This app is super easy. All you have to do is download it and follow the instructions. It spells everything out for you.

My biggest complaint with the app is that there aren’t many games on it. There are about 20-30 games, and it’s true that many of them are similar to the most popular mobile apps, so that’s great if you love those types of games.

My favorite mobile game is the one where you have to figure out the saying from the picture, and unfortunately, I couldn’t find that through Mistplay.

A lot of the negative Mistplay reviews you will see are about the ads. People will say that there are too many ads, and it affects the gameplay. Obviously, there are ads, but I didn’t find it to be a problem with every game.

I think most of the ads and interruptions are tied to the specific game rather than to Mistplay. Only one game that I tested out was unplayable due to the ads (unfortunately it was “Stump Me”, the game that was most similar to the picture games I enjoy). Some games had very few ads, others wanted me to post to Facebook every five seconds, and still others had an ad after every level. Again, this varied greatly depending on which game I played, so it seemed like it was tied to the game more than to Mistplay – which is why I rated the app itself so high.

Redeeming your rewards through Mistplay is easy. You earn units through playing games, and you trade those units for gift cards. There are no additional hoops that you need to jump through.

Mistplay is not that profitable. But you can earn some extra money by using it. I think that for what it is, it actually pays quite well. After playing with the app for just a few days, I already have enough money to redeem a five-dollar gift card. This is never going to be a lucrative side business, but it’s a great way to get paid to veg out.

My biggest issue with Mistplay is that the games are not “in-app”.  In order to start playing a game, first, you have to open Mistplay, then choose your game. But you can’t just open the game and start playing. You have to download the game separately, then go back to Mistplay to open the game. This led to me downloading quite a few games onto my phone, taking up valuable photo space. However, if you’re going to download these games anyway, then it isn’t much of an issue.

Using Mistplay and playing these mobile games didn’t take up as much battery as I would have thought. Most of the games have “battery saving mode” so they don’t drain your phone’s power while you are playing. This was a pleasant surprise.

If you’re in after the down and dirty – get Mistplay here!

If you’re interested in the full Mistplay review – keep reading and all of your questions will be answered!

How Much Can You Make from Mistplay?

You are not going to get rich with mobile gaming. In fact, you won’t even make real money with Mistplay. But what you will earn is units, which are redeemable for gift cards.

If you are trying to earn extra money to make regular purchases with Mistplay, you can redeem your units for either Amazon or Visa gift cards. But if you are using Mistplay to support your gaming habit, you can also redeem them for a Google Play, Playstation, Xbox, Nintendo, or even Gamestop gift card. A few other options, such as Starbucks, Itunes, and eBay are also available.

The most expensive gift card you can purchase with Mistplace is $50, and you can only redeem that much at Nintendo for 15K units. Most other stores allow you to redeem up to $25, and those are 7500 units apiece. One thing I appreciate about Mistplay is that it costs the same amount of units for any of their retail partners. 7500 units will get you $25 at all of their partners, there aren’t special “unit prices” for certain stores.

The lowest amount you can get in a gift card is fifty cents, which costs 400 units.

How Long Does it Take to Earn?

How quickly you earn depends on what games you play and how often you play. Mistplay has a “boosted game” feature, and if you play the games that are boosted, you earn extra units.

I played a silly game, Blast Fever, for a few hours while I was vegging out in front of the TV and earned 200 units. I tried out one of the boosted games for about 10 minutes and earned 200 more. It was nice to be able to earn units faster with the boosted feature, but unfortunately, most games are only boosted for a few days.

What is the Fastest Way to Make Money with Mistplay?

The fastest way to earn money with Mistplay is to play the boosted games when they are available. You will earn extra units by playing these games, and that will add up quickly. Unfortunately, this means downloading a new game every time one is boosted, but if you just want to make a quick buck with Mistplay, this is the way to do it.

There’s a difference between winning money and earning money. Mistplay isn’t a gambling site. You don’t win anything. However, you do earn units when you play games.

There are a few casino-slots-type games available on Mistplay, like Pop Slots. But these aren’t real gambling games. You don’t bet real money, and you can’t redeem the coins for real money. You can, however, buy coins to play with as an in-app purchase, but you don’t gamble those. You also don’t earn money through the game itself, you earn through the Mistplay app. There’s a lot of nuances involved, and it depends on the game, so you have to read the fine print with any game that you decide to play.

What Games Give You Real Money?

You can earn real money (in the form of gift cards) with any game that you play through Mistplay. Each game has a different level-up system that determines how much you earn.

You can also earn real money in the form of bonuses just from using Mistplay.

What are the Limitations of Mistplay?

Like anything, Mistplay has limitations. My least-favorite feature is that you can earn gems by making in-app purchases. You can then trade in those gems for additional units, which go towards earning a gift card.

My issue with this is that it makes people spend money to get money. Please don’t complete any in-app purchases just to earn gems. It is not worthwhile. The only way this would ever be reasonable is if you are going to make in-app purchases anyway.

I also don’t like that you have to download each game individually, as I already addressed. That part is truly annoying.

The final limitation is that it’s only available through Android. If you use Apple iOS, you are out of luck.

Overall, Mistplay is definitely worthwhile. It’s way more fun than taking online surveys in your spare time, and a great way to make some extra money in your spare time doing something fun (or mindless). Obviously, you are never going to be able to quit your day job with Mistplay, but it’s a great option to make some quick cash.

If you play mobile games anyway or download mobile games to keep the kids occupied – you should definitely get Mistplay. If you’re going to be using these games anyway, why not earn a little money while playing? Be sure to monitor your children’s use of it though – I’ve heard horror stories of kids charging thousands of dollars in in-app purchases. Be sure they know not to buy anything through any mobile gaming application they might be using.

Other Ways to Make Money Online

If you’re looking to make more money, Mistplay may not be the app for you. There are quite a few ways you can make money online playing video games or through side hustles, and if you need more than a hundred dollars a month or so, Mistplay is not your app.

Instead, you can get a part-time job, freelance, become a virtual assistant, try dog-walking, or start a variety of other side hustles that will help you earn money in your spare time.

If you want to focus on making money gaming, you can sign up for Twitch and work towards being a Twitch affiliate. The great thing about the online world is that there are thousands of ways to get paid doing something you love online. The opportunities are there, you just have to find them.