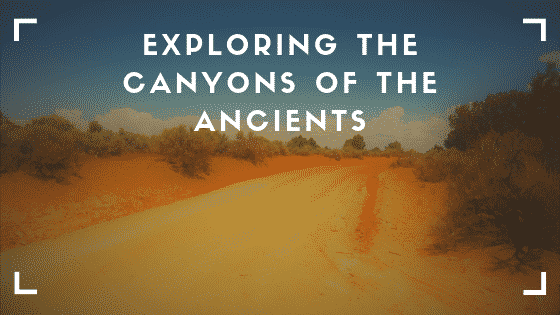 The Canyons of the Ancients National Monument is a vast network of ruins in Southwestern Colorado and Eastern Utah. The ruins were built by ancestral Puebloans the 12th century AD.  If you are anything like me, you are thinking “What?? 12th Century ruins right here in the USA?”.  I know, I was surprised too!

Discovering the Canyons of the Ancients

I had never even heard of the Canyons of the Ancients before planning this trip. I’m so ashamed of my lack of knowledge of ancient American history! My plan was to road trip through Southwestern Colorado to visit Mesa Verde National Park, another ancestral site (Which I had only just recently heard of as well). Did you know that Mesa Verde is home to ancient cliff dwellings? Neither did I, but as soon as I heard that, I had to go see it. Anyway, I digress.

While I was planning my route from California to Colorado, I noticed another area on the map spanning from Southwest Colorado to Southern Utah labeled “Canyons of the Ancients”. That sounds cool, doesn’t it!? The Canyons of the Ancients are super close to Mesa Verde, according to the map.  They are also shaded in green, indicating a National Park. I decided to add it to my itinerary with absolutely no research into what it actually was.

The Canyons of the Ancients isn’t exactly a National Park. It’s not like Mesa Verde or the Grand Canyon, where sites of interest are mapped out and easily accessible. The Canyons of the Ancients are 164 thousand acres of land protected by the National Bureau of Land Management with limited access. Many of the ruins protected in this vast stretch of land are still buried!

Don’t let the idea that some ruins are still buried prevent you from going. There are plenty of amazing sites that are excavated and open to the public. They are mostly tucked away off gravel and dirt roads, and some can only be reached by foot! Don’t let this deter you, it is just part of the adventure! All of the sites I visited were well worth the effort it took to see them. I only mention this so that you don’t get anxious, as I did, when traveling down a seemingly abandoned dirt road. You are probably heading in the right direction!

Getting Started with the Ancients

If you are going to visit the Canyons of the Ancients, you should start with the Anasazi Visitor Center located near Cortez, CO. The entrance fee is three dollars, which includes access to a museum that houses a rich collection of Native American artifacts, including pottery, tools, and tapestries. It also offers fun hands-on display! I played with a real flint stone tool, and I tried my hand at weaving (which is super hard, thank god for modern technology!).  While at the center, you can get a map of the important sites in the Canyons of the Ancients from the museum staff, who also give you excellent directions to the many excavated sites.

During my journey through the Canyons of the Ancients, I explored Lowry Pueblo, Painted Hands, Cutthroat Ruins, and Hovenweep National Monument. These are some of the better-known, excavated, and easily accessible archaeological sites.

Lowry Pueblo is fantastic. It is off a gravel road with few signs, but it is a huge sandstone pueblo and very well preserved. You can even go inside a little bit!  The site includes a Kiva and information on Pueblo life. Kivas are Puebloan ceremonial sites, and as an armchair archaeologist, it was really interesting to see where inhabitants practiced their rituals.

This site is very accessible and easy to get to. The walk around the Pueblo was paved and mostly flat, so wheelchairs and persons with disabilities should be able to navigate it fairly easily. It also has a small recreation area that’s perfect for picnics. A huge bonus to me was that there was also a restroom available – not all of these hikes have restrooms!

Painted Hands is incredible as well. It is a tower built on top of a small enclave. It is called painted hands due to the cave paintings of hands underneath the tower inside the enclave. This petroglyph is hard to spot at first, but if you look closely you will see them. It is truly awe inspiring to see artwork that has survived the elements for centuries.

Painted Hands is located down a fairly rough dirt road, and although you can see the tower from the makeshift parking lot, it is a bit of a hike to actually get to it and to see the paintings underneath.  It’s a rather steep trail, and not accessible to wheelchairs.

After seeing the tower and the painted hands, I continued down the savage dirt road to cutthroat ruins. Hiking to see these ruins was rough! The towers are about a mile hike through high-desert terrain, which is hilly and super hot in the summer.  The hike would have been a lot easier if it wasn’t for the searing heat, so make sure you bring plenty of water. It was worth the effort though, cutthroat ruins consist of multiple towers, some of which are in excellent shape considering their age.  It’s amazing that these towers, which have been abandoned for centuries, are still standing. Preservation efforts didn’t begin until the 19th century, so these towers had to withstand the harsh winds of the desert with no man-made intervention. The Pueblo people really knew their architecture.

My last stop was Hovenweep National Monument, located on the Utah side of the Canyons of the Ancients. Hovenweep is the most well-known of all the sites I visited. It even has a bathroom and a small visitor’s center!

Hovenweep has three tiers of hikes to chose from. The first is a leisurely tower overview hike. This is a short walk on a paved path that leads to an overlook of the towers from across the canyon. This hike is perfect for people with mobility issues. The second tier is a tower walk, which is a short half-circle around the canyon. This hike takes you close to the towers.  It was an easy walk with no elevation changes, but it probably isn’t very accessible for people with mobility issues. The third option is a more strenuous hike all the way around the canyon. I did not even want to attempt that trailhead after my difficulty with Cutthroat Ruins!

I chose the section option, which allowed me to see all the monuments in the area without a strenuous hike.

The Mysteries of the Ancients

There are many other sites protected under the Canyons of the Ancients monument. Getting to some of them requires vigorous hiking, and getting to others requires insider knowledge since their locations aren’t on the map. The sites I visited are all doable together in one day. If you have more time (and are adventurous), you might want to hike deeper into the canyons to uncover more of the mysteries within.

3 thoughts on “Exploring the Canyons of the Ancients”