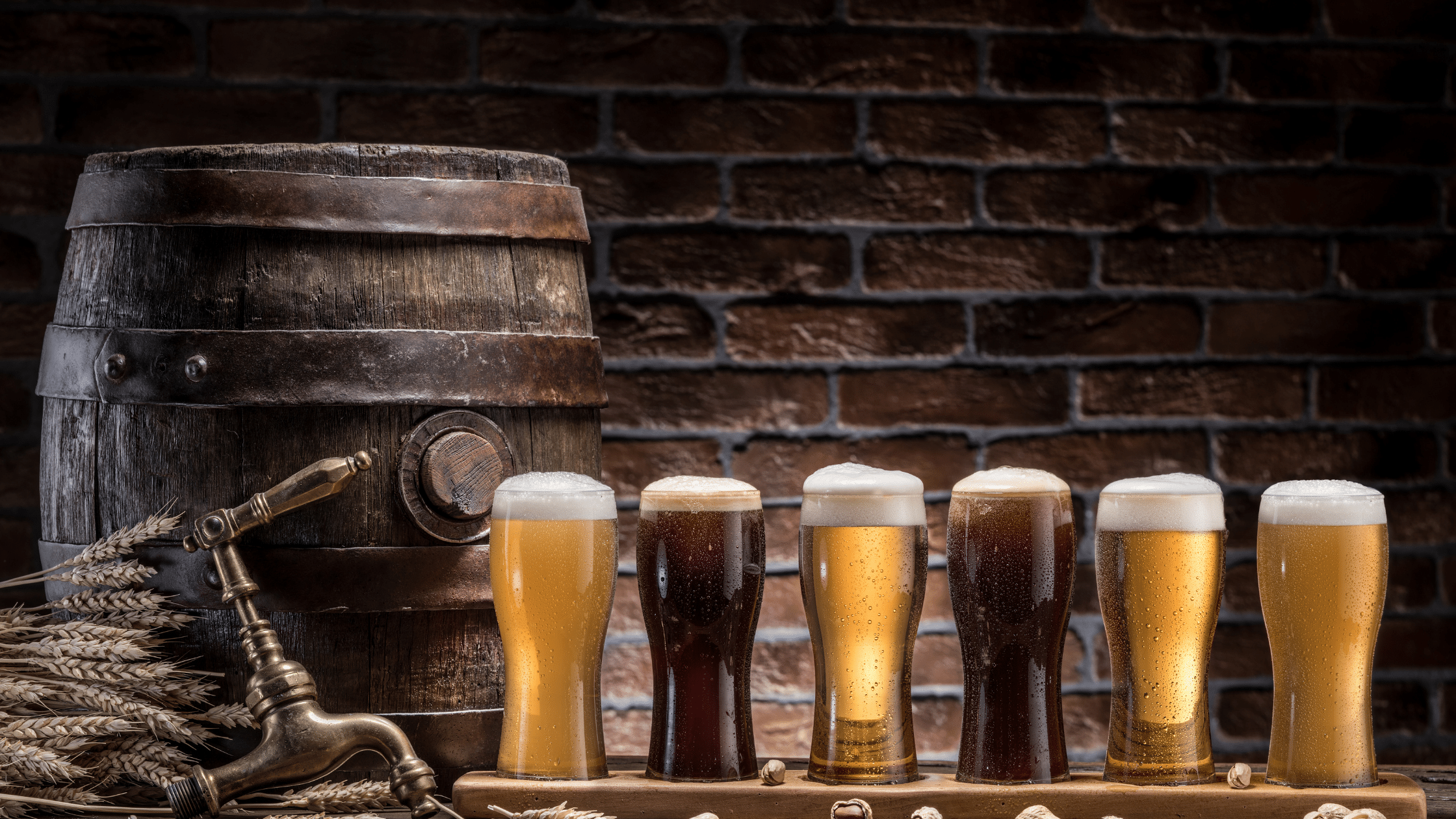 Dark tunnels, old tricking springs, the smell of yeast in the air…and free samples? The Yuengling Brewery tour has it all!

At the height of coal’s popularity, Pottsville, PA, was one of the richest cities in the county. Funded by the coal of the surrounding mountains, it was a lively place rich with culture. It was the perfect spot to open a brewery in the 1800s.

Yuengling Brewing Company, named after the founder, is still in operation and still has some operations running out of the original building, which makes it the oldest Brewery in America.

Watch the video instead! And don’t forget to subscribe!

Yuengling embraces its position as one of the most iconic companies in the United States and offers tours of the old brewhouse. And the best part – they are absolutely free.

You can tour the old dark tunnels and see the factory at no cost. Tours run every day except Sunday from 10 am to 3 Pm, and generally run once per hour.

You will start your tour at the taphouse and gift shop across the street from the old brewery. Just go to the front desk and ask for a tour. They will check your ID (you need a wristband for the free samples at the end!) and sign you up for the next available tour, which is generally at the top of the hour.

While you’re waiting for your tour, you can browse the gift shop and museum. The museum explains some of the brewing processes and houses some artifacts of Yuengling (and historic Pottsville) from throughout the centuries. You can see old bottles, photos, news articles, and numerous other merchandising memorabilia. You can also get your picture taken with a Sam Adams cut-out! 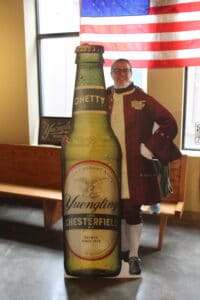 When the guide announces that the tour is about to start, it’s time to head to the front of the building in the waiting area. This is the official start of the tour, where the guide will brief you with some safety information and explain the tour process.

Now you’re ready to head down to the brewery!

The first stop is the old filling room. Before automation was a thing, a person would place a keg under each spout to fill it. By the time he got the fourth keg secured, the first would be filled and ready to move. Can you imagine the strain on your back from moving kegs around all day?

Now, those processes are automated at the newer factory across town, and the filing room is used primarily as a warehouse.

The most iconic part of the tour, and probably why most people go, is the underground tunnels. Two huge tunnels were hand-carved into the mountain in the early days of the brewery.

The brewery was built on an underwater spring, and the tunnels not only led to the first water source for the beer but also helped keep things cool all year long. This was especially important in the early days of the brewery before refrigeration was invented.

The tunnels are dark, wet, and rocky. They are shorter than I expected them to be, but I am awed when I remember that they were built in the 19th century and dug by hand. It is a spectacular feat of human perseverance and ingenuity!

While in the tunnels, the tour guide explains the brewing and fermentation process (which, in the early days of the brewery, happened in these tunnels) while also discussing the history of the brewery in the early 20th century. The most intriguing part is the history during prohibition, where Yuengling shifted to a non-alcoholic brew to keep its doors open.

Continuing on The Tour

After the tunnels, we went up the stairs and wandered through hallways filled with Yuengling imagery. We stopped at the old Rathskeller, a lunchroom/tap house for early workers. Workers in good standing could even get a free beer with lunch! The Department of Labor eventually shut this practice down, and I guess I can’t blame them. Drinking on the job probably isn’t the best idea.

Next, we wandered through the halls of the old brewhouse, past old but still functioning machinery, and tons of wall décor and memorabilia on the way to the factory.

I enjoyed seeing the factory, and I only wish I had taken the tour during the week so I could see it in operation (the factory doesn’t run on weekends). It has conveyor belts, bottling machinery, and all the other fun operations you would imagine from a 20th-century factory.

It’s fun to see the behind-the-scenes mechanisms of factory work, and you can imagine how the assembly line works even if you don’t get to go during the week. The factory is small but still in operation, although there is a larger factory on the other side of town and a new complete brewery in Tampa, Florida.

Nothing compares to the original, though. I love that Yuengling keeps this small factory running; it’s a great homage to the company’s history.

The Best Part of the Tour

I said the tunnels were the best part of the tour, and although they are amazing, I may have lied. The best part of the tour is the free tastings at the end! You get to choose two samples of Yuengling’s craft beer – and the choice is the hardest part. If you’re going in the late autumn, I highly recommend the seasonal Hershey Porter. It combines two of Pennsylvania’s most iconic companies into a delicious craft beer. I’m not even a fan of beers, but this is delicious. I might even be convinced to say it’s the best beer I’ve ever had!

Their other seasonal beer is the Oktoberfest, which is available in late summer and through beer season. I tried this one during my tour, and it was perfect for a beer. Maybe my pallet is opening as I get older, and I’m better able to enjoy the intricate flavors of different beers! Or maybe Yuengling does craft beer right. The world may never know. 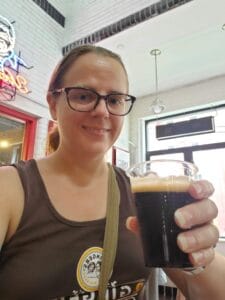 But if you aren’t a porter or chocolate fan, there are other options. Yuengling has an amazing ale and a pretty good lager (so I’m told). Their flight is a great option for those who prefer a light beer, and they recently introduced an IPL, which is similar to an IPA in regards to how hops are used.

The taproom doesn’t have a kitchen, and they don’t offer any food, so make sure you eat something prior to embarking on the tour or bring a snack. If you’re hungry afterward, downtown Pottsville has a few good restaurants to head to, including Elbows Mac & Cheese bar and a really nice restaurant called the Crimson House. It’s nice to check out the locally owned small businesses!

Enjoy a Part of History and Delicious Craft Beers!

Beer lovers and historians alike can find something enjoyable about this brewery tour. As the oldest craft brewery in the country nestled in a region filled with history, even non-drinkers can appreciate the town’s history.

The tour is best for folks who enjoy both, though. This craft brewery is a legend among breweries, and anyone particularly interested in the history of beer needs to give it a visit. However, I’m not even a huge beer fan, and I loved the tour, so if you find yourself anywhere near Pottsville, it’s definitely worth checking out. This tour is one of the best things to do in Pennsylvania!

How Much Does the Tour Cost?

The tour is free

What days is it open?

What Times are the tours?

Brewery tours are available from 10 am-3 PM

Should I book ahead?

No, you can go directly to the brewery and ask to participate in the next tour.

Do they do private tours?

Yes, they do private tours for groups of 25 or more. You do need to call ahead for a private tour.

What Should I wear?

You must wear closed-toed shoes without heels. The tunnels are cool, so if you get cold easily, bring a light jacket (in the summer).

What are the best days to go?

If you want to see the factory running, you should go during the week.

What’s the Best Part of the Tour?

It’s a tie between seeing the tunnels and the free samples at the end!