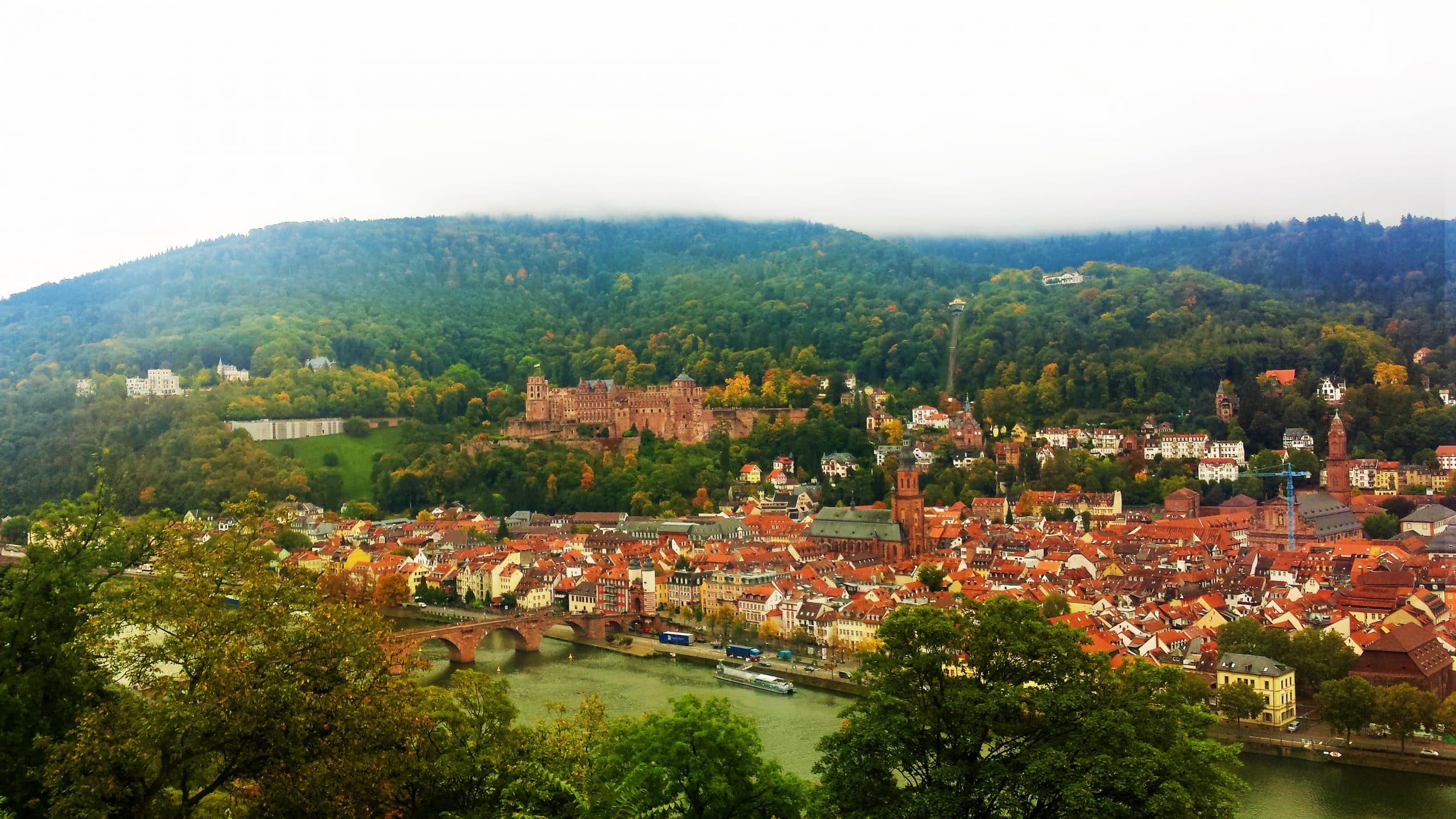 We visited the small town specifically for Heidelberg Castle, which sits upon a hill overlooking the city. As a lover of all things history, I told my friend I absolutely had to see at least once castle during my time there, and she chose Heidelberg because it’s a top tourist attraction, and it was convenient to our route. Next time, I’ll visit Neuschwanstein Castle, the fairy tale castle, inspiration for Disney castle, and one of the most famous castles in Germany.  But alas, on this trip, we would not be traveling through Bavaria, where that castle is located.

A Brief History of the Castle

Heidelberg castle has far more history than Neuschwanstein castle, which is a baby as far as castles are concerned. The medieval castle dates to the 11th century. Unfortunately,  much of the original structure was destroyed and rebuilt over time. The upper castle was destroyed by lightening in the 16thcentury, and most of its original glory was lost to a fire in the 1700s. After the fire, it was never completely rebuilt. However,  in the early 1900s, it was reconstructed and preserved due to its historical significance.

Who Lived in Heidelberg Castle

As the castle is nearly a thousand years old, you can imagine that numerous people lived there throughout the ages. Unfortunately, a lot of the early history about the residents of the castle is unclear. It’s reported that Conrad of Hohenstaufen was one of the earliest residents in the 12th century, but it isn’t known for certain.

Some famous residents throughout the ages include Ludwig III in the 15th century, Louis V in the 16th century, and Charles II in the 17th century. In the 18th century, the court of the Elector of Palatine moved to Manheim, and the castle was no longer lived in.

Although you can walk up the sloping hillside to the castle gardens for free, you need to purchase a 2 Euro ticket to get inside the courtyard.

If you do not wish to walk up the hillside to the castle, you can take the funicular-railway (train). It costs 8 euros to go up to the castle, and 12 to go all the way to the top of the hill. There is a gorgeous viewing area all the way at the top, worth the extra euros on a clear day to see the city below. A train ticket includes the entrance fee to the castle courtyard, but does not include entrance into the castle itself.

Can You Go Inside Heidelberg Castle?

The only way to get inside the castle is via guided tour, which is 4 euro per person.

Spending the 4 Euro for the guided tour is definitely worthwhile! The  guide was extremely knowledgeable about the history of the castle. She explained in great detail the history of the castle, from who originally built it and why, how it was destroyed, and which important figures called it home. She also described all of the improvements that were made on it throughout history. Shockingly enough, the original fortress wasn’t nearly as large and foreboding as the final structure!

Wine played an extremely vital role in the culture of early Heidelberg. In fact, the castle is home to the largest wine barrel in the world! If only the US had that as a roadside attraction rather than twine – everyone would be sleeping in the car!

The tour guide explained how important wine was to the people of Heidelberg castle. It was such a prominent good that the townsfolk paid a portion of their tax with it! All the wine from the people of the town was collected and poured into the giant barrel. This “wine tax” was then issued back out to castle workers and even soldiers as part of their pay.  Free wine is definitely underused as part of a benefits package today!

Wine still plays an important role at Heidelberg castle today. The cellar was converted into a comfortable café, with a small coffee and wine shop where you can sample wines from local vineyards. Winetasting in a real castle brings a feeling of being at one with history in a way that is difficult to match. It makes you feel like more than a spectator, it gives the castle a real quality unlike the museum-like quality that you get from the tours.

Although the castle is the main attraction, the city of Heidelberg is great to visit for it’s own sake. It’s home to the prestigious Heidelberg University,  as well as Philosopher’s Way.  In addition to the unique historical sites, it’s also a wonderfully picturesque town, with stunning hills overlooking the Neckar river. Situated about half way between Frankfurt and Stuttgart, and fairly close to the French border, it’s in the perfect location for a quick detour.

Although the city applied to become a Unesco World Heritage site in 2007, the application was denied. Perhaps the UN will revisit that decision in the future, as the beautiful town is full of history worth preserving.

Heidelberg University is the second most important selling point to the city, besides the castle. It’s the oldest university in contempered Germany, dating to the 14th century. It’s also one of the most important research universities in Europe.

Unfortunately, I didn’t get the opportunity to study with the great minds of the university during my short time in the city. However, I could easily feel the impact of the college town without having to step foot inside a classroom. Their were a lot of young people there, and the atmosphere was what you would expect from a relaxed college town.

Heidelberg is also famous to German citizens for its “Philosophers’ way”. It is a stunning pathway on the hillside opposite the river from the castle. From this location, you can look out on the castle positioned over the city below. The effort put into the strenuous climb is well worth the reward of the view at the top. The name Philosopher’s way originated because professors from the University on the other side of the river found it to be a relaxing retreat. They would make the difficult climb and use the stunning view at the top to ponder life’s mysteries.

Heidelberg has plenty of restaurants and coffee shops, which is typical for a college town. Being from California, we really enjoyed the California Bake Shop coffee house, which had delicious coffee and a supremely cozy little reading room in the back. It was a perfect place for a short respite. However, as a small locally owned business, they did not cater to vegans.  There were no options for soy or almond milk in their coffee drinks. The other coffee shop across the way, Malta, did have vegan options and my vegan friend greatly enjoyed their brews as well.

All in all, I really enjoyed my stay in Heidelberg. I would recommend a short side trip to see the castle to anyone traveling through Germany. Click here to book your stay!

More things to do in Heidelberg