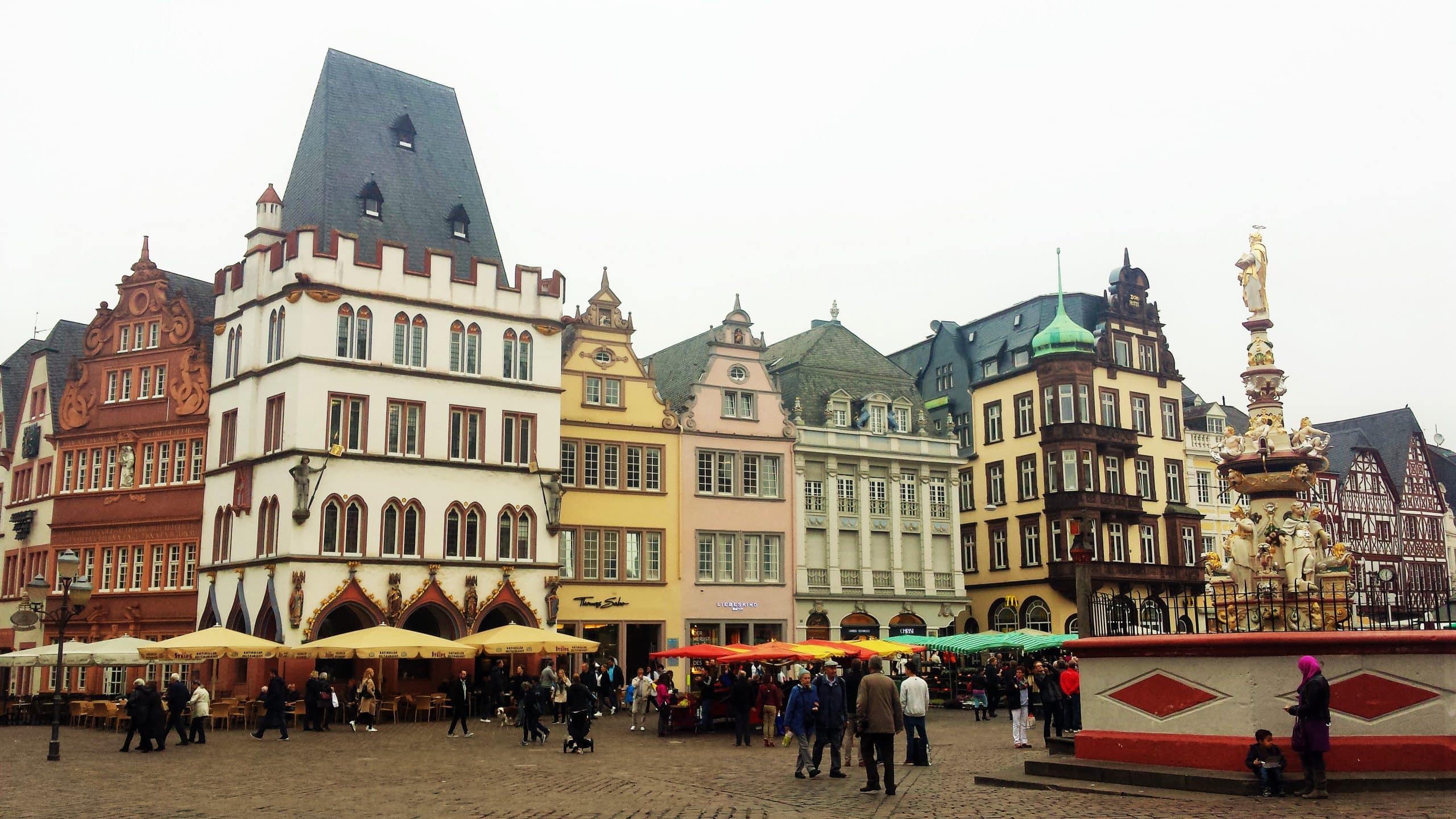 Germany’s oldest city is a quaint little town near the border of Luxemburg, Trier.  It is the site of an ancient Roman encampment. Despite this history, Trier is not a popular tourist destination for foreign travelers, and the city doesn’t cater to international tourism the way many of the larger, more popular cities would.

Despite that, I think that everyone should add Trier to their Germany itinerary. Not only does it have an amazingly rich history, but it’s located in the scenic Mosel Valley on the shores of the Mosel River. The city lies in the lower portion of the valley, and you can walk up into the hills and explore the vineyards for a scenic view of the town below.

All of this stuff is wonderful, and reason enough to take a detour or day trip to visit Germany’s oldest city. But another reason to stop by is the food. Trier is home to one of the best restaurants I’ve ever been to in my life. Read on to find out everything you need to know about the city and the best way to explore it!

Trier is located in the Rhineland state of Germany. It’s very near the Western border, and in fact, the closest major airport is in another country, Luxemburg. It’s located a few hours south of Cologne and a few hours West of Frankfurt.

We drove to Trier on the autobahn (rental cars for the win!) for our first visit, and I flew to Trier via Luxemburg on my second visit. A train runs from Luxemburg to Trier fairly regularly, and that’s the easiest way to get there if you don’t rent a car. However, you can pay for the luxury service – a cab that will take you directly from the airport in Luxemburg to your hotel in Trier.

Trier is Germany’s oldest city because it’s the location of an ancient Roman encampment. The Romans established a city there around 30 BC, and from there it became an important part of the western edge of their Empire. Tier was actually a lot larger then than it is now. It was one of the largest cities of the Roman Empire and had approximately 75000 inhabitants.

Get a Great Overview with a Walking Tour

A great way to explore any new city is with a walking tour. The tour guides are extremely knowledgeable and highlight the most important sites of the city.

Due to the lack off foreign visitors, there is only one English language walking tour per day in Trier.  It costs 7 Euros per person and starts at 1300 daily. The tour is 75 minutes, and well worth it.

The Walking Tour gives an excellent overview of the city, from its origins in the Roman Empire through the medieval period and up until the present. The tour guide points out buildings that used to be part of medieval castles, explains the meanings of the statues in the square, and gives you a great deal of history on the oldest and most important structures.

The tour starts at the Porta Nigra (the Black gate) which was the original gate to the Roman City. It was heavily reinforced, and the structure actually formed two gates which formed a trap against invaders. As you stand in the center you can imagine how terrifying it would have been to be trapped inside, with nowhere to hide from the arrows and hot oil flowing from above.

The next tour stops are St. Peter’s and St. Mary’s Cathedrals. The churches are attached in the center, and built in three different distinct architectural styles, Romanesque, Gothic, and Baroque. It is very interesting to see the distinct styles and understand the approximate time periods each portion of the cathedral was built in. The tour also gives an excellent history of why the improvements were made throughout the ages (hint, it was mostly political). This tour is a must do for anyone with an interest in history, religion, and culture.

Wandering Through the Roman Ruins

After the walking tour, we decided to check out some of the Roman Ruins. There are quite a few Roman baths, and there’s also a pretty impressive amphitheater.

Unfortunately, during the fall the ruins are only open until 1700, so we wouldn’t have time to see all of them. We settled on the Kaiser Bathhouse and were very pleased with our decision.

The bathhouse cost 3 Euro per person to enter. An advantage to it being near closing time was that it was fairly empty, so we had free reign to wander around with little interruption. A large portion of the ruins are underground, resulting in tunnels that you can freely explore. It is quite an eerie experience, and definitely worth the paltry entrance fee.

After visiting the bathhouse, we decided to walk the path up the hill to the vineyards. The walk was a little difficult, as it was rather steep, but it was worthwhile. We could see the amphitheater from the top of the vineyard, so we didn’t have to be disappointed that we missed it. We also saw amazing views of the entire town. It was quite spectacular. There are a few benches up on the hill, so after you climb you can relax and take in the views. It was a wonderfully serene way to spend the evening.

I mentioned the food in Trier in the opening paragraph, and I bet you’re wondering what the best restaurant on the planet is.  It’s called Kartoffel Kiste, which roughly translates to “the Potato Sack”.

This restaurant is so good that I spent an extra $1000 to make a pitstop in Trier during my last trip to Germany. I went to Hamburg for a good friend’s wedding, and couldn’t pass up stopping by when I was in the same country. I promise the food is that good!

The first time I visited Kartoffel Kiste was on my first trip to Germany with my girlfriends. We ordered the homemade potato bread with cheese dip for an appetizer, and it was delicious. I ordered the potato balls, and my friend ordered a dish with chicken, broccoli, and cheese.

The Most Delicious Thing I’ve Ever Eaten

I can not even begin to explain the deliciousness of these potato balls. The potatoes were similar to scalloped potatoes, but they were molded into little hollow balls. The center of the balls were filled with ground beef, and they were smothered with a creamy delectable cheese sauce. These cheese balls were the reason I took a second trip to Trier.  I practically ran to Kartoffel Kiste for dinner the second I stepped off the train from Luxemburg. My mouth watered as I ordered, and my stomach rumbled as I awaited my long-anticipated feast. The first bite was like heaven. The savory sauce lingered on my tongue and it took all my willpower to not gobble it down like I haven’t eaten in three days.

I returned to the Kartoffel Kiste for breakfast, and I desperately wanted to try something different. But the call of the potato balls was too strong. Who knows when I’ll get back to Trier to savor this delicious entrée once again? I ordered it again and ate the entire thing before catching my train back to Luxemburg to head off on to the next leg of my journey.

I spent an extra thousand dollars to get to Trier and to eat these delicious potato balls twice, and let me tell you, it was worth every penny. And the truth is, most German cuisine is actually really good. A lot of amazing foods originated in Germany, and it’s only a matter of time before it becomes celebrated as the foodie country it truly is.

More Things to do in Trier

Trier is a gorgeous city with a lot of history. It truly is a hidden gem and it’s unfortunate that it’s overlooked by Germany’s larger cities and castle towns.  It is definitely worth a visit. Check out all the other great things to do in Trier on Viator!