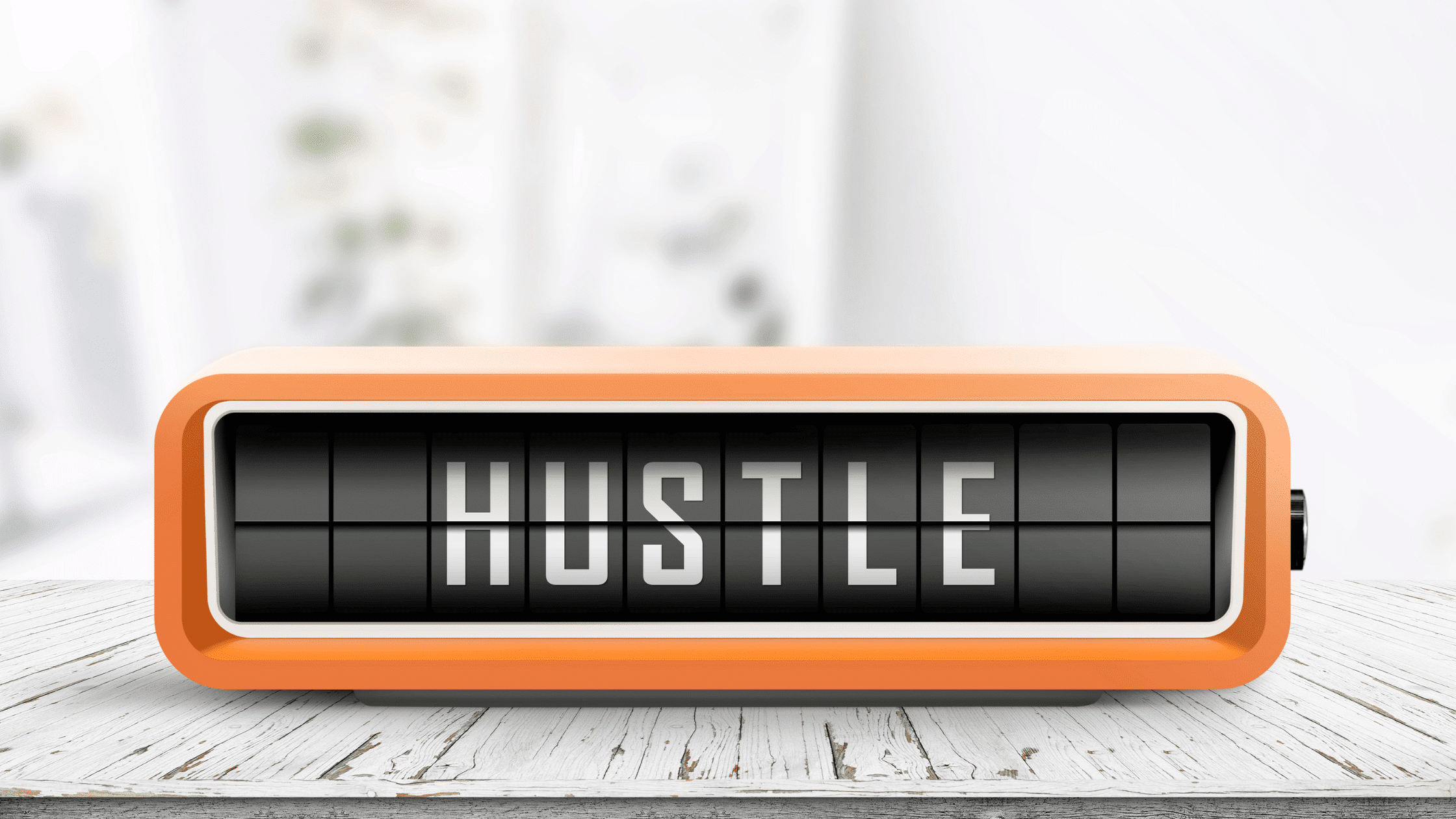 Go to work, come home, and work on side hustles for the next three hours. Work all weekend building your side business. Never stop growing, improving, and hustling. It’s the only way to get ahead, and if you aren’t doing it, you’re wrong. This is hustle culture. And it’s destroying our lives.

What is the Hustle Culture?

Hustle culture is the idea that you need to constantly be working beyond your normal job. You should have a side hustle or six. All the extra money needs to go into investments or new businesses. You need to be active on every social media platform in existence, selling your products and services, networking with folks who can help you, and building your brand.

Why is Hustle Culture Toxic?

Hustle culture is a dangerous blend of ableism, misogyny, and unfettered capitalism. It’s the message that everyone needs to constantly be working to be successful, and it’s incredibly toxic.

Hustle culture doesn’t even acknowledge that some people literally can’t work every minute of the day. Many people are unable to work at all, much less work twelve-hour days and weekends without a break. Hustle culture ignores these people. 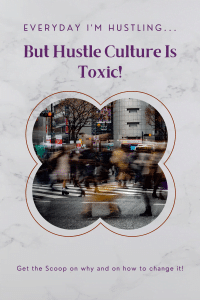 It also ignores the people who have other obligations in their lives, such as childcare, elder care, taking care of a home, and all the other thousands of tasks that people (hint – mostly women) have to accomplish while they aren’t at work. The misogyny and ableism thinly veiled in these messages of “I did it so you can too” is glaringly obvious.

The truth is that it’s not normal. No human who works forty hours a week should be unable to afford to live. We shouldn’t have to try to monetize our hobbies just for a chance at survival. Life should be for living, enjoying, experiencing, and engaging. Life isn’t supposed to be one gigantic hustle. Relationships aren’t just about what you can get out of the other person. The idea that the only point of life is to work is disgusting and should be challenged regularly.

What Are Some Examples of Hustle Culture?

If you don’t believe that hustle culture is a real thing – just take a brief peek at money Twitter. There, you can find a constant barrage of how someone is better than you because they worked more. 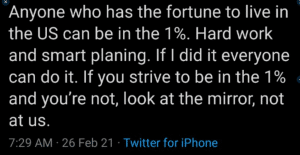 This gem is one of my favorites – anyone can be in the 1% in the US, and if you aren’t, it’s your own fault. 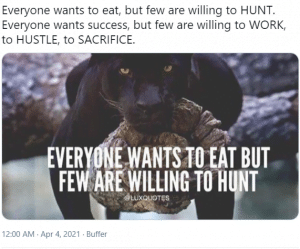 Ah yes, only a few people are willing to hustle and sacrifice for success. Not only does this tweet promote the idea that you can only be successful if you make huge sacrifices (the cornerstone of Hustle Culture), but it also ignores the millions of working poor who do work hard and sacrifice but still can’t get ahead.

To be a self-made millionaire, you shouldn’t even eat. All of your money should be invested. This is taking sacrifice to the next level. 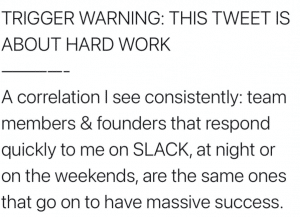 The people who live to work, answering on the nights and weekends, are those who are successful. While this might be true, can’t the tweet’s author see the glaring issue with this? People should be able to have lives and free time.

These tweets are just a small sample of hustle culture that’s around us all the time. You may have seen similar tweets, or news stories about side hustles, or in motivation threads on Instagram or Reddit. Hustle culture surrounds us and constantly bombards us with the message that if we aren’t constantly working, it’s our own fault we are struggling.

I’m a Hustler….and I Hate the Culture

Look. I’m a hustler. I love blogging and gaming, and I’m always looking for fun new ways to monetize things. Usually, I’m unsuccessful, but it’s a game to me. It’s fun. I enjoy spending my free time writing for the blog and supporting the folks in my discord.

I also do it because I want to quit my job and support myself with these side hustles alone. Before starting, I knew it would take a few years of really hard work, and I accepted that. I accepted that I would need to sacrifice some things in the present to get the life that I wanted in the future. That was my choice, and I’m okay with it.

I also understand that not everyone will have the ability or desire to do what I’ve done (or am doing). I’m so incredibly privileged to have a job that pays the bills while I work on my passions. It’s given me tons of opportunities beyond my wildest dreams. Millions of people don’t have that. I’m also privileged to only have to work 40 hours per week, have a set schedule that I can plan things around, and have a car so that I only have a short commute. Millions of the working poor don’t even have these things.

There are tons of people in similar career fields that don’t hustle. They are happy working their forty hours a week. They are perfectly content to work until they’re in their sixties and retire to a life of comfort. Guess what? That’s okay!!

Everyone is different. Everyone has different goals and dreams and aspirations. Nobody should have to hustle to get by. Nobody. Hustle culture sends the message that if you aren’t working your butt off seven days a week, you are to blame for a life of destitution.

How Can We Prevent Hustle Culture?

I know that people like to avoid touchy subjects like politics on finance blogs, but when it comes down to it, this is a political issue. People are hustling because they have to. Wages are stagnant. People can’t afford to live without hustling. They work their main job, then go deliver food after hours just to get by. Then because they toiled so hard working at building some semblance of survival this way, they shame others who don’t want to work that much. They also refuse to acknowledge the systematic problems running rampant in our society that prevent millions of other people from even trying to hustle in this way.

We need to change our entire culture surrounding work in general. Americans have this weird obsession with work. We seem to think that if you don’t work, you don’t deserve to even live. The idea that automation would create a world where we would have more leisure time is lost on us. We value work for the sake of working. Of course, a society organized around work as a value system will worship something like hustle culture. It takes the exaltation of work to the next level. We should always be working. Never stop working and hustling, and if you do – well, it’s your fault that you’re poor.

We need a culture shift. Work isn’t something to be worshipped and valued – it’s a means to an end. Work to pay the bills and to get the money to do what you enjoy.

We also need to acknowledge and fix the problems that keep people trapped in a cycle of poverty. The outrageous cost of living, including healthcare and childcare, coupled with low wages is one of the main reasons people are poor – not that they don’t hustle hard enough. Many of the poor in America do work over 40 hours a week, but their work is not valued. “Get a better job” is often thrown out as a catch-all to blame the victims of low wages so that society doesn’t have to do the hard work of fixing the real problem. Hustle culture tells these folks that they are trapped in poverty because they didn’t try hard enough, and that couldn’t be further from the truth.

It’s far easier to avoid hustle culture on a personal level than it is to fix it on a societal level, and if that’s all you can do, it’s a great start. The secret to avoiding hustle culture in your personal life is to live a life that’s meaningful to you.

No one ever said on their death bed that they wished they worked more. Is it any wonder that work isn’t actually the key to a meaningful life? Instead, do what makes you happy. Remove yourself from the culture that tells you that you need more and more to be happy because, after a certain point, more money doesn’t equate to more happiness.

There’s nothing inherently wrong with hustling. If you enjoy it, as I do, then keep on doing it! But stop shaming others for not doing or wanting the same thing. Acknowledge the fact that others can’t actually do it, and vote to support programs and policies that will make their lives easier without the hustle. Even if you enjoy the hustle, understanding that not everyone does and that it’s not normal to expect people to hustle just to survive will go a long way towards getting rid of the toxic parts of hustle culture.

No one should have to work evenings and weekends just to survive. We should stop shaming people for trying to live their lives, and we should promote a healthy work-life balance. Life is for living, not for hustling, so let’s end this toxic idea that if you aren’t working every second, you deserve to be poor. We can do better.

5 thoughts on “Hustle Culture: The Toxic Celebration of Working Ourselves to Death”