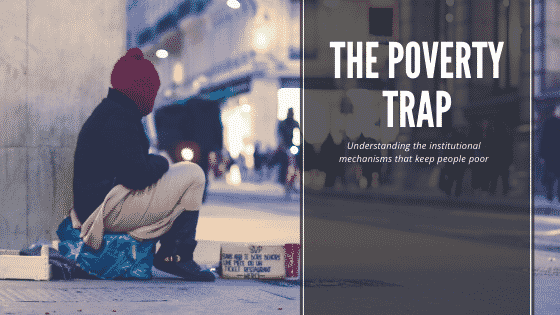 The American Dream is built on a myth. If you work hard, you’ll be successful and be able to move up in society. You’ll be able to give your kids a better life than you had. Although that is true for some, especially those born into the middle class, it isn’t true for everyone. This myth completely ignores the poverty trap.

What is the Poverty Trap?

The poverty trap is a mechanism that keeps individuals, families, and generations stuck in a cycle of poverty. The working poor can’t achieve the dream of upward mobility, because it requires money that they don’t have access to. In this sense, the old adage that it takes money to make money is absolutely true. The working poor don’t have access to the money it takes to claw their way out of poverty, so instead, they are trapped in a cycle of generational poverty.

What Causes the Poverty Trap

The poverty trap has been studied extensively, mostly in under-developed countries. The causes of the trap generally include limited access to credit & capital markets, the destruction of agriculture, disease, lack of access to health care, war, and degrading infrastructure.

This basically means that people get trapped in a cycle of poverty because they don’t have access to savings accounts, investments, or credit. They can’t borrow if they get in a bind, and they have no way to beat inflation on any money they do have.

The Poverty Trap in the United States

You may be reading this and thinking it’s a phenomenon only experienced in underdeveloped countries on the other side of the planet.

The poverty trap affects millions of Americans. Many mechanisms in the United States make it virtually impossible for the working poor to dig themselves out of poverty and provide better lives for their families. And guess what? Many of them do, in fact, correspond to the studied causes of the poverty trap.

Banks are all over the place. You can almost find one on every corner. So, if you’re comfortable in your middle-class bubble, you might not realize that millions of the working poor don’t have access to bank accounts.

Sure, they could probably go to a bank and open an account. But it’s not as easy as it sounds. First, you won’t find as many banks in poverty-stricken neighborhoods. Instead, you will see a variety of “check cashing” stores.

People who live in these under-served areas will have to find a way to make it to a bank, and because most don’t have cars, that means a potentially hour-long bus trip. But even if people in poorer communities have access to a bank, have you ever stopped to think how expensive a bank account can be for those with low incomes?

Free Checking isn’t Free if you are Poor

Most banks offer free checking only if you meet certain requirements. Generally, you need to have a certain amount of money direct-deposited each month, maintain a certain balance or make a certain number of transactions.  I can easily get free checking virtually anywhere because my company offers direct deposit, and I can maintain whatever the required balance is in my accounts.

And maybe that’s the case for you too.

However, many people can’t meet those requirements. Some work side gigs and don’t know when the next paycheck will come (and it’s often cash when it does). Others work for small businesses that don’t offer direct deposits. Some can’t afford to make five debit card transactions a month.

Do you know what happens to these people? They get charged for the checking accounts – upwards of ten dollars a month!

That’s right, those who can least afford to lose that money are the ones that get charged for it. Why would they even try to have a bank account if they lose money each month? And when they have a low balance, they still get charged the monthly fee, and then they get charged an overdraft fee on top of that, leaving them in debt to the bank.

If they can’t pay, it goes on their credit report, and they get blacklisted from getting a new checking account for nearly seven years. Clearly, access to capital markets isn’t given in the US.

In the United States, we still have a lot of wealth being generated by Agriculture. It’s one of our top exports and plays a huge factor in our economy. We have tons of fertile land throughout the heartland and are one of the world’s top livestock producers.

So how is agriculture being destroyed?

It’s not, technically. But it’s being taken away from the people. Small family farms are being destroyed to make way for giant corporations. Two main companies own most of the seeds and sue small farms if there’s any hint of cross-contamination. Small farmers are going bankrupt due to the trade wars, while corporations are buying up their lands.

In my opinion, the destruction of agriculture is listed as a cause of poverty because it leads to people being unable to afford to eat. Although agriculture isn’t being destroyed in the US, the result is the same. Millions of people live in food deserts without access to healthy food options.

There is no question that health care is an enormous problem in the United States. Most of the working poor do not get healthcare through their employers. They don’t get time off for sick leave either. Their choices are to go to work sick or stay home and not get paid (and even risk getting fired). They can’t see a doctor because it’s prohibitively expensive, so they stay sick or even die of curable diseases.

I just wrote an extensive post on how being sick is a privilege that not everyone can afford, so I won’t rehash a lot of that here. But the reality is that millions of Americans lack access to affordable healthcare, and millions more are an illness away from poverty.

The United States has been at war for over 15 years. In fact, a study was done recently that showed the US has been at war in some form for all but 20 years of its 240 years of existence. Pretty eye-opening, isn’t it?

Luckily for us (not so much for the other countries), most of the wars in our current eras are being fought overseas. That means they aren’t affecting our infrastructure or hurting our civilians. Therefore, war is one of the few things on this list that isn’t directly contributing to the poverty trap in the United States.

There might be indirect links between funding for war vs funding our communities or sending soldiers from poverty-stricken communities off to war, but I haven’t seen any direct correlations.

The infrastructure of the United States is definitely degrading. A recent study showed that there are nearly fifty thousand structurally deficient bridges in the United States. Schools in low-income communities have historically lacked proper funding to educate students, and roads are in such bad shape that private companies have stepped in and used filling potholes as a new form of marketing.

It’s so bad that the American Society of Civil Engineers gave American infrastructure a D+ on its yearly report card. That organization estimates that we’d need to spend a whopping 4.5 trillion dollars to fix the problems with our roads, dams, schools, airports, and more.

Digging Out of Poverty

It is true that some people can escape the poverty trap. The media loves to point to these exceptions and proudly proclaim that it can be done. See, this one person out of millions was able to do it, so you can too!

This only serves to make people feel like poverty is their own fault, and not a result of a mechanism that systematically keeps people trapped.

It’s like that episode of Black Mirror – Fifteen Million Merits. The system allows one or two people to escape (only to be trapped in a different system). This gives millions of others a false hope that they can do it too. The reality is that digging out is so much harder than it sounds. People get gouged at every turn. Every time they try to claw themselves out, something else puts a boot on their necks and keeps them down.

What Can We Do?

I think the most important thing people can do to help those caught up in the poverty trap is to acknowledge its existence. I see far too many people claim it’s the fault of the poor. If they just made better decisions, they too would be able to escape poverty.

Empathizing with them and realizing it isn’t actually that easy is such an important first step. Educating our friends in our middle-class bubbles helps get the word out.

Then, we should vote for policies that will actually help these people. Look at the causes of poverty traps, and vote for the people who are addressing them. This is how we can change things and end the poverty trap in the United States.

8 thoughts on “The Poverty Trap”