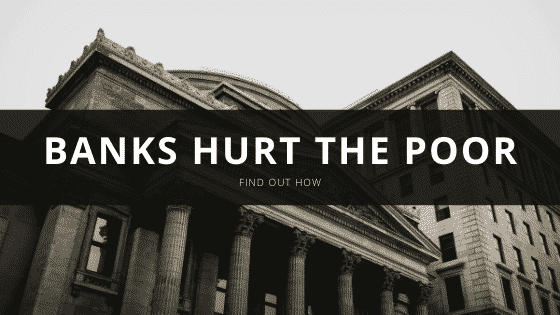 Our banking system seems great, doesn’t it? We get a safe place to store our money, instant access to it when we need it, and the opportunity to make a tiny bit in interest (and I do mean tiny. Interest rates are laughably low!). But all these amazing advantages to keeping money in the bank don’t work if you’re poor. You see, banks don’t help poor people. Banks hurt poor people.

There are so many ways that banks hurt poor people – it’s insane! You’d think that some type of agency would cut those in poverty some slack, give them the tools that they need to dig their way out – but nope. Not in the United States. Our poverty trap does an amazing job of keeping people poor, and banks are a big part of that.

Banks hurt poor people by charging them for checking accounts. They also charge overdraft fees, refuse to issue loans, and refuse to cash checks for non-clients. All these things work to hurt the poor.

The Privilege of No-Cost Checking Accounts

You might be thinking that’s absurd. It’s easy to find no-cost checking accounts! That’s not true. It’s easy to find checking accounts that waive any fees as long as you have money. But, most of those accounts will start to charge you as soon as you lose your job and aren’t having any money direct deposited. They will charge you if your account goes below a certain amount, or if you aren’t making an arbitrary amount of transactions each month.

So basically, if you’re poor, you don’t have the privilege of a no-cost checking account. You have to pay for an account that people with more money get for free.

Another way banks hurt poor people is with outrageous overdraft fees. Not only will they charge poor people thirty-five dollars for a single overdraft, but they will also count the largest transaction first, so they can charge a maximum amount of fees.

What should have been a single overdraft fee ballooned into three fees. That’s over a hundred dollars worth of fees- which is nearly impossible to pay off if you are poor. But it doesn’t stop there – some banks will charge yet another overdraft fee if those original fees aren’t paid within a few days.

So let’s say you got into a little financial trouble. You over-drafted your account due to the above scenario, but then you lost your job and couldn’t afford to pay it back. Guess what? Now you are blacklisted – not just from that bank but from most banks.

Now you don’t have access to a checking account at all, and it’s going to be even harder for you to get ahead. If you earn a paycheck, you’re going to have to rely on a check-cashing service to get access to your hard-earned money.

Why Are Check Cashing Stores Bad?

Check-cashing stores are a horrible scam. They charge you outrageous fees just to get your own money out of a check. Walmart is probably the best option for check cashing if you don’t have a bank account. They only charge three dollars for checks up to $1000. But even at that, three dollars is a lot for the poorest amongst us. And the poorer still may not even have access to a Walmart in their neighborhoods.

Some people’s only option is to cash a check at those notorious payday lending stores or fly by night check-cashing stores. These establishments can charge up to 5% to cash a check – that’s fifty bucks on a $1000 check! Can you imagine paying anything close to fifty dollars just to access your money? And it’s the poorest amongst us that get caught up in this cycle, making it even harder for them to get ahead.

Another option that a lot of companies are starting to offer is a pre-paid card. It’s like a debit card, but it’s not tied to an account. You put money on the card, and can then use it like any other debit/credit card until that money is gone.

But these also come loaded with fees. Most charge a monthly fee (which some waive if you get direct deposit – just like checking accounts) while others charge a per-transaction fee. It’s easy to eat up all your money when you’re spending close to four bucks each time you buy something!

A ton of people are probably thinking to themselves that it’s these people’s own fault. They shouldn’t have over-drafted their account. They should have budgeted better. Maybe they shouldn’t have signed up for what banks like to call “overdraft protection” in the first place if they couldn’t manage their money.

Take a moment and think about this. You’re saying that the poorest people, those who barely can afford to live, need to be better at money management? There’s no money to manage in the first place! Not only that but can you imagine being penalized so much for the simple fact of being poor?

But also, let’s talk about how banks spin this overdraft protection. Due to the new laws, banks can’t force customers to accept overdraft fees. They have to give them options. I had to watch a 10 minute video on how great overdraft protection is because of all the “flexibility it offers” (granted, it also discussed the other option of turning it off and getting your card declined when you lack funds) the last time I opened a checking account, and then I had to choose my preference. It’s easy to see why those who lack financial education would choose overdraft protection.

The reality is that many, many people are living paycheck to paycheck, and over-drafting their accounts because they have no other options or don’t understand finance. It’s easy to blame them for their lot in life, but I think we’d all be better off if we found ways to fix the systematic injustices that plague our society.

Not being able to access a credit card in an emergency or take a loan out to buy a car or home keeps people trapped in institutionalized poverty.

And I get it – that’s the sad part. A bank is a business, and poor people tend to be high risk when it comes to paying off loans. Limited access to credit is only one factor that keeps people poor.

I don’t think the answer to this problem is forcing banks, a business, to start offering loans to the poorest amongst us at low-interest rates. And unfortunately, raising the rates to protect the bank’s interests would make the loan out of reach to those who need it most. There isn’t a good answer for private industry.

There are alternatives to banks when it comes to getting a loan. In fact, I wrote an entire post dedicated to this! But, these options are probably also out of reach for the poorest amongst us who need loans the most. I don’t think they are a viable solution to this problem.

What is the Answer Then?

I know some of my finance friends hate the thought of the government getting involved in things, but I think more government is the answer here. A former presidential candidate had the idea of transforming the post office into a mail delivery service/banking system. It would offer no-fee checking accounts and loan services for underserved communities.

The beauty of this idea is that the infrastructure is already in place. There are post offices in most communities already. The government can protect its interests by not allowing customers to overdraft and by not offering interest on accounts.  No risk and no reward for either party when it comes to banking.

The post office can also offer loans to underserved communities. Yes, it’s a high risk for the taxpayers, but if payday loan services can do it and make a profit, the government can find a way to do it and actually help people. Any interest made on loans can go back into making the post office viable.

Alternatively, the government can force banks to offer no interest, no fee, no overdraft, basic checking accounts to anyone who needs one. I’m not as big of a fan of having the government force the private industry to do something. In my opinion, the government exists to help the people, and businesses exist to make profits. I prefer businesses that put people over profits (and some do!) and I vote with my dollars to support those businesses, but I don’t think it should be a requirement of businesses.

I may not know all the answers, but I do think that solving this problem and ensuring that even the poorest amongst us are able to access and utilize their own money at no cost would go a long way towards alleviating the poverty trap. What do you think?