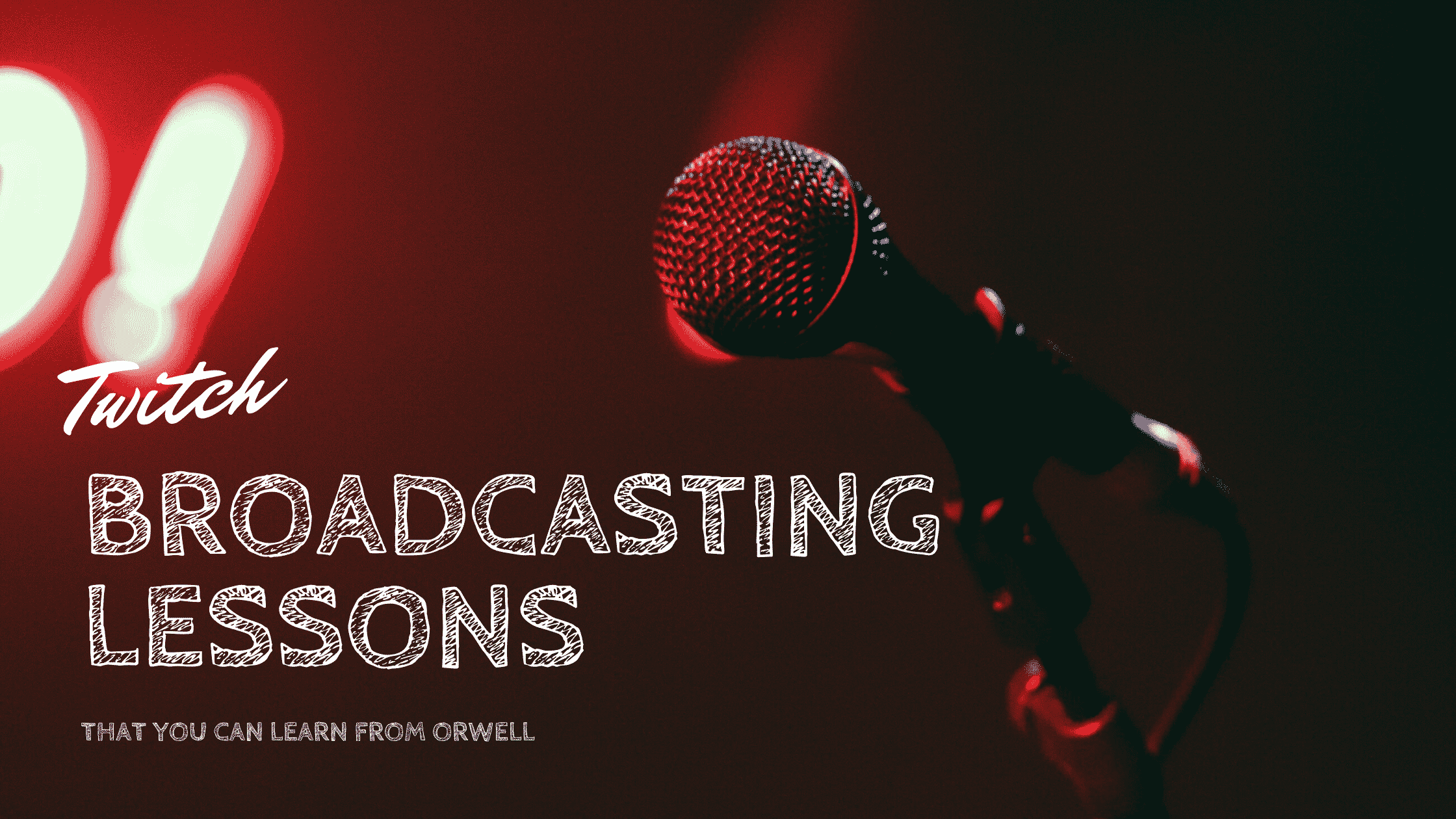 One of the best things about being a Twitch streamer is the community that I’ve created around Twitch. I’ve met some amazingly talented people so far on my streaming journey, and learned a ton of broadcasting lessons from all of them.

But, that’s not even the best part. The best part is something that I never expected -that some of my new streamer buddies would want to write content for Partners in Fire! So today’s post is a guest post from my awesome new streamer friend who goes by the name  Doughz1lla. If you love his British style, be sure to check out his stream and follow him on Twitter!

And here’s his take on the broadcasting lessons we can all learn from George Orwell.

Eric Arthur Blair, more commonly known as George Orwell, was one of the greatest English writers known to mankind. Regrettably, his name is invoked in fearful tones these days alongside a couple of his more popular works; 1984 and Animal Farm. This is a shame as some of his most brilliant insights have been compiled into a book of essays (available on amazon for about 16 bucks). Alternatively, the essays can all be found for free at the Orwell Foundation.

I picked up the book shortly after I left University and much to my horror, I found that most of what I had learned in four years of study had been summarised in “Politics and the English language.” Fortunately, that was just one of many valuable works contained in this book. I’m sure however, you didn’t come here to read about one of my many regrets from my time spent studying, rather the promised broadcasting lessons for Twitch.TV. Orwell spent some time broadcasting English poetry to a crowd of several million Indians whilst it was still part of the British Empire. The lessons which I have tried to apply to my channel, and you should, to are summarized here.

Broadcasting Lessons You Can Learn From Orwell

Firstly; “If you are broadcasting to people who share your language but not your cultural background a certain amount of comment and explanation is unavoidable.” The internet is a wonderful tool for connecting people. Despite this there can be yawning gulfs between the broadcaster (You) and your audience. One such event when I was starting out as a streamer is a great example for this. As I was reaching for a cigarette, I used the English slang “fag” rather than a term more appropriate term. Now I only had a few viewers at the time, one picked up on it and we laughed amount the slip of my tongue.

This does illustrate however, that there is a gap between the culture of you the broadcaster and you the viewers. It’s something to be aware of and can even be exploited to your advantage. Content creators such as Boris and the SpiffingBrit on Youtube, or WelshPride888 on Twitch, have chosen to make the most of their respective heritages to appeal to more viewers. They make an effort to play up their cultural backgrounds and indeed centre a great deal of their content around it. It is very possible for you to do the same thing. The lesson that I have chosen to take from this is that I should watch my language and try to utilise my cultural quirks where and when I can.

Secondly “One [method] we frequently used was to set a poem in music.” Orwell was broadcasting to several million Indians who had little reason to tune into a show concerning British poets – more than a few had very good reason to resent this. He therefore used every trick he could to retain viewership (A very common problem among streamers today.) Music is an excellent tool for enchanting the listener, filling space for when you are not talking and demonstrating your personality to your viewers. An example of this is ProfesorJam who uses Lofi music in his broadcasts to great effect. A decent track fills the space when you are not talking. It is a great tool.

Whenever I stream a strategy game, I have noticed that my view count remains higher when I have appropriate music on – high paced action music for wars and more relaxed jaunty tunes for peacetimes. Music isn’t something I use all the time, but it is certainly worth looking in to. It is worth being cautious about which songs you use however, especially if you intend on setting up a VODS channel – YouTube is infamous for its copyright strikes (and Twitch is starting to catch on as well). However, carefully placed music can be a useful tool in any streamer’s arsenal.

The third broadcasting lesson we can learn from Orwell is to be comfortable broadcasting to an audience of one. Many streamers I know, after reaching affiliate, turn off view count. This makes sense. As Orwell writes “When [on air] the poet feels that he is addressing people to whom poetry means something and it is a fact that poets who are used to broadcasting can read into a microphone with a virtuosity they would not equal if they had a visible audience in front of them.”

The lessons here are simple. You will generally make a more entertaining stream if you stop worrying about view count and instead focus on the stream itself. Focusing on view count is distracting, when you see the numbers go down, or up, you will (I know I certainly do!) attempt to recreate or avoid what you just did, whilst continuing to stream. Dividing your focus is at the best of times is a poor idea.

To make a good stream, focus on the stream alone. Do not worry about view counts. If improving the numbers is a serious concern then, whenever you notice a significant drop in view count make a note of the time. Indeed, Twitch has a handy tool for counting the average viewers under your channel dashboard. Review your video later and try to figure out if there was anything in those few minutes that may have turned people off. Paying more attention than that would be foolish.

Lesson 4: Form an Emotional Connection With Your Listeners

The final lesson we can take from Orwell concerns the audience themselves. “In broadcasting your audience is conjectural but is an audience of one. Millions may be listening, but each is listening alone or maybe as part of a small group, and each has (or ought to have) the feeling that you are speaking to him individually.”

The importance of this cannot be understated. Of course, Orwell was writing about poetry, but the lesson here should be applied to your streams too. You should speak as If you were talking to an individual person and try to form an emotional connection.

This simple broadcasting lesson does require some adjustment for Twitch. Your viewers can reply to you and talk in chat and of course you should pay attention to them when they talk. Fundamentally however, for small streamers like us an active chat is an exception rather than the normal state of things. So, remember, you are broadcasting to an audience of one.

Where Do These Broadcasting Lessons Come From?

These four brief extracts are taken from Poetry and the Microphone, written by George Orwell in 1943. The essay summarizes the lessons Orwell learned while broadcasting thirty minute literary programs to India, and that I try to apply daily in my streams. I hope you find them helpful as well.

In summary the lessons are as follows; firstly, be aware of cultural differences, and feel free to exploit that if you are so inclined. Other streamers have done to great effect. Secondly, use music in your broadcasts. It is an effective tool to retain viewers and demonstrate your personality. Thirdly, do not worry about view counts. Focusing to much on that figure detracts from your stream. It is a much better idea to focus on making a good stream, re-watching your videos and evaluate it when you have finished, if you are determined to find something to improve on or repeat. Finally, you should consider, always that we are broadcasting, really to one person. The listener. Forming an emotional connection with them is crucial.

It seems worth finishing with this quote. “It is reasonable to assume that your audience is sympathetic, or at least interested, for anyone who is bored can promptly switch you off by turning a knob.” No matter how low your views are, if some people are listening to you, you know you must be providing entertaining content for them. And entertaining just one person is a great reason to stick with Twitch.